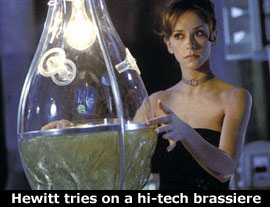 by Walter Chaw Between watching Jennifer Love Hewitt's breasts consistently upstage her (and be commented upon constantly, besides) and Jackie Chan try hard to erase his legacy as the best physical comedian of the talkies, it's tempting to declare that The Tuxedo is a bankrupt entertainment and a remorseless time pit. Tempting and not entirely inaccurate, but in truth The Tuxedo is more than just cheerfully misogynistic (and most of Chan's films are, in one way or another, woman-hating), cartoonish, and even racist in a Green Hornet/Kato sort of way--The Tuxedo is a symptom of a far deeper concern involving the inability of the West to ever make proper use of hijacked foreign commodities or construct an action film anymore that doesn't resort to slapstick childishness and/or grotesque violence.

It's difficult to say whether The Tuxedo is more boring or embarrassing--I'm prepared to call it a draw. Chan has indicated in interviews that he's interested in testing the possibilities of technology and stuntmen in extending his daredevil career and in that pursuit he has crafted a quartet of American films that steadily pushed him first into mediocrity and now gaping ineptitude. His comic timing is hopelessly off (whether that be a result of Hewitt's lack thereof or Kevin Donovan's stultifying direction, it's hard to say), and his reticence to do any stunts or much fighting has etherized one of the most vibrant action stars in the history of cinema into this sad ethnic caricature that sort of looks like Jackie Chan.

Folks exposed to Chan for the first time through his American films would be surprised to learn that the man used to be in films that didn't require him to mock his accent, sing in staged karaoke moments, and play Uncle Tom straight man to such bright lights as Lucy Liu, Chris Tucker, and now Love Hewitt. It's a long road from the delirious pleasures of Drunken Master II to The Tuxedo, you see, and Chan has traveled it in record time. All it really took, after all, was an aging star wooed by the bright lights of the dream factory and a Hollywood mentality that, stuck in The Teahouse of the August Moon, believes that any Asian star (no matter how big) needs a Western balance (no matter how banal and insipid)--and that there's no formula so ancient-Disney wretched that it would be too awful for ex-pats from a Hong Kong industry that was, for a luminous period, the most exciting cinema in the world. Originally published: September 27, 2002.