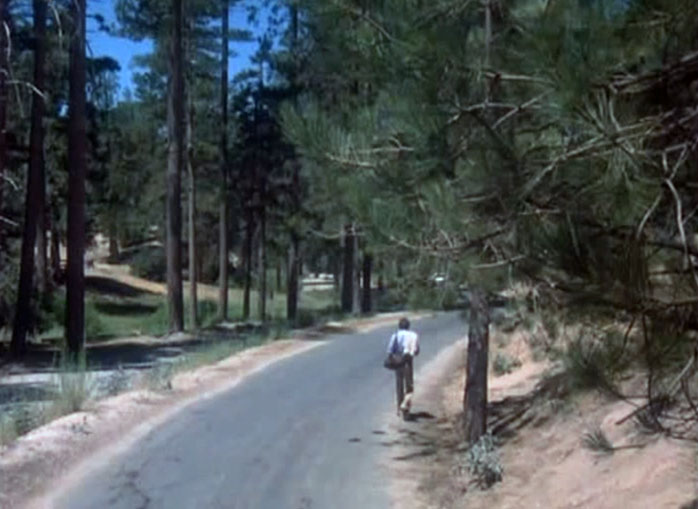 by Walter Chaw The drive home always feels faster. I didn't think it would this time, but it did.

Backtracking along the scenic route, along the empty spaces and small towns and manicured lawns and a high-school field with a carefully-raked running track, red clay or something, I rolled down the window. It smelled like almost-autumn. I thought about stopping at the summit of Monarch Pass this time, where a cottage industry had sprouted up around the fact of reaching the tip of it. You could buy suntan lotion there, and a sweatshirt that declared you to be short of breath, which you were.

I listened to the next sixteen chapters of The Stand and Larry hadn't quite gotten out of Manhattan yet, and Stu hadn't quite escaped captivity, and I stopped once on the side of the highway so that I could get my sunglasses out of the festival bag I'd stuck in the trunk--the bag a gift from friends who'd already given me back a piece of myself over the past three days.

There are a few things to know about Telluride. It's a little city in a valley--or whatever it's called when there's not so much a valley but a hole in the mountains they put a city into. There's a bookstore there called, cozily, "Between the Covers," and it has a remarkable selection of obscure film books. I wonder if they have that selection year-round or if it's just highlighted during the festival. I bought Annette Insdorf's new book on Philip Kaufman and, because it's Telluride during the festival, I was able to get both Prof. Insdorf and Mr. Kaufman to sign it. I told the latter I'd be reaching out to him to do a full-length interview about Invasion of the Body Snatchers--because, I said, I believed it to be a key film of the American Seventies. He seemed grateful to hear it. Regardless, I'd always wanted to say that to him.

I spent a lot of my downtime at Telluride this year shuttling between the bookstore and the various screening venues. In one journey, feeling the 8,600ft. elevation as I was getting pelted by the clockwork afternoon rain, I saw Mia Wasikowska weaving through the crowds on the street, unnoticed, with a look of consternation on her face, the very picture of Alice. I had a lovely cup of espresso and two scoops of ice cream (salted caramel and toffee) one afternoon from a local ice creamery, and a chicken kabob from a street vendor, and a couple of concession-stand turkey sandwiches, accompanied by popcorn and washed down by bottles of root beer.

Public transportation in Telluride comes in the form of two gondolas. One route lasts approximately thirteen minutes, the other is much shorter. I got to take both to the condo where I was staying. I shared one trip with Errol Morris's delightful wife and sometime-producer Julia Sheehan, during which she told me that Donald Rumsfeld, unlike Robert McNamara, could not stop being a politician, not even for a moment. I shared another with a beautiful woman who, halfway through, told me the only film she saw at the festival so far that she hadn't liked was Under the Skin. I kept to my side of the gondola the rest of the way.

On my last night in Telluride, I took my friends to a Chinese restaurant and noted with bemusement that the staff had tuned the flatscreen in the dining area to a NATIONAL GEOGRAPHIC documentary on the hunting habits of lions. One of my friends covered her eyes and asked if it was possible that the lions were just cleaning the hippo they were draped over. I assured her that among the things about to happen to the hippo, a kind of cleaning was likely among them.

On my last morning there, I got up and the room was quiet. It was early, at least an hour before the shuttle from the condo to the gondolas was running, so I shouldered my bags, lamented the weight of my laptop, and started walking down the side of the mountain. I was cold for the first time this summer, and it felt good. I walked the winding road, almost a mile to the gondola station, and stopped at the family-owned coffee shop--where I'd been getting Americanos and breakfast burritos every morning for the ride into the second gondola station--to find a sign, hand-lettered. They were grateful, they were sad: the day before had been their last day, too. I read it twice, tapped the counter, and then I was gone.

The drive home is faster because you know the way, I think. And for that moment at the side of the highway, I stood watching storm clouds gather to the west in an angry blot. To the east, where I was headed, there was only flat blue. Sunglasses in one hand, my other hand on the lid of the trunk, my heart was full and my head was swimming with wonders and remembered versions--better versions--of myself. For that lungful of mountain air on a cool summer morning turning into fall, everything was possible backwards along the scenic route. I had everything I ever wanted, and I was everything I wanted to be.

How I missed your writing, Walter. Thanks.