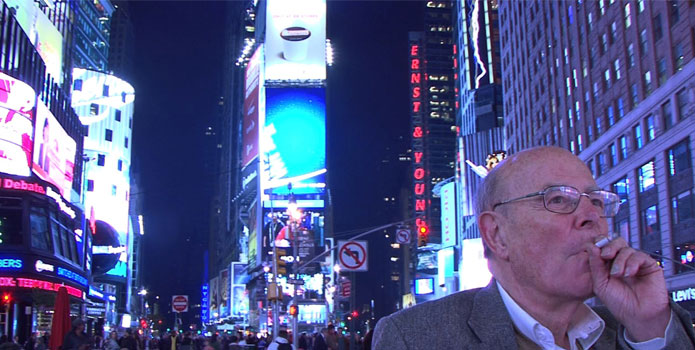 by Walter Chaw Errol Morris returns to The Fog of War form in what could be seen as a complementary piece: a feature-length conversation with Donald Rumsfeld called, appropriately, The Unknown Known. It's a phrase that repeats throughout a picture that's scored in a Philip Glass-ian way by Danny Elfman (who at one point channels Michael Small's music for The Parallax View) and ends with a rimshot that would be funnier if it weren't terrifying. Different from The Fog of War and an apparently repentant Robert McNamara, The Unknown Known's Rumsfeld comes off as not so much unrepentant as incapable of reasonable self-reflection. There's a story I like to tell about talking with Capturing the Friedmans director Andrew Jarecki, who revealed to me that at an initial screening one of the subjects of his documentary, watching herself speak, muttered, "I didn't say that." Rumsfeld appears to be like that: he's not lying, he's having some kind of psychotic break. I don't mean it flippantly, and Morris, whose line of questioning ranges from WMD to the popular public misconception that Hussein was involved with 9/11, from Guantanamo to Abu Ghraib, allows Rumsfeld to clarify his non-equivocal equivocations. When Rumsfeld laughs, it's frightening--an alien thing's attempt to simulate a human emotion. Another highlight: a portion of the Nixon tapes where Tricky Dick reveals his mistrust of Rumsfeld to Haldeman. The Unknown Known is as fine a film as Morris has made, all the more timely now that the United States--under new leadership, elected on a platform of hope and change--is on the eve of another act of war.