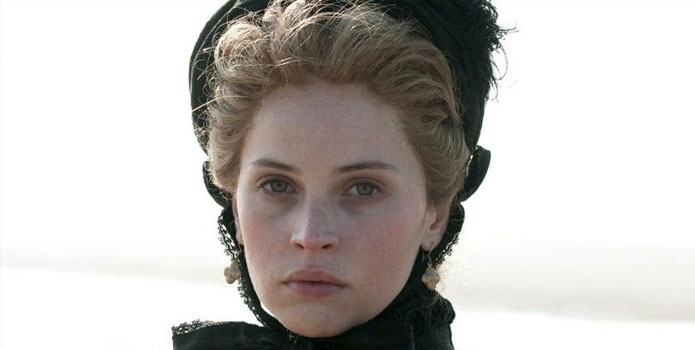 by Walter Chaw It opens with an almost literal invocation to the muse, segues into a stage play like the prologue to Olivier's Henry V, and bookends itself with a stage production that, again almost literally, drops the curtain on the proceedings. Ralph Fiennes's The Invisible Woman is every inch the literary production, a classical presentation that avoids the stuffiness that often attends these things, replacing it with intimations of doom in foley and script. Based on Claire Tomalin's book, which tells of the affair between an older Charles Dickens (Fiennes) and 18-year-old actress Nelly Ternan (Felicity Jones), it has about it a delicious gravity, a weight of inevitability driven by long shots of Nelly pounding across a beach as waves crash behind, the crunch of her footfalls foretelling a coming storm. With his second feature, Fiennes establishes himself as midway between the traditionalism of Merchant/Ivory and the carnality of Kenneth Branagh--the marriage of the two styles in bright relief during a climactic train-crash sequence that, initially muted, pulls out into something wilder. Though it arguably breaks no new ground save successfully portraying Dickens as the asshat he was, credit is due for a very fine, studiously-detailed performance from Jones that allows Nelly to avoid the clichés attendant to the young mistress role. Hers is a completely rounded, imminently human journey through childhood to self-actualization, joining the growing list of strong roles for women this year despite the film seeming doomed to be shunted to the side. It deserves more than that. If short of great, The Invisible Woman is strong enough (note all the rumblings on the soundtrack, the lines warning of storms rhyming with minor apocalypses in the picture proper) to establish Fiennes as perhaps the same kind of director as he is an actor: alive somewhere between the meat and the mind.