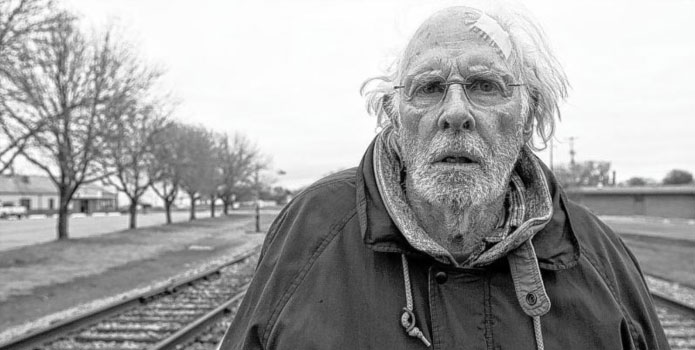 by Walter Chaw Alexander Payne returns to form after the disappointing The Descendants with the muted, often hilarious, and sentimental-without-being-schmaltzy filial road trip Nebraska. It's easily his most tender work, despite the mordant, sometimes bitter humour Payne has become known for in his best work (Election remains his crowning achievement; About Schmidt is no slouch, either), and it makes a brilliant move in offering a showcase opportunity for national treasure Bruce Dern. Shot in black-and-white, with a spare, minimal production design making it an expressionist piece projecting the barren interiors of its broken characters, Nebraska, though not the adaptation of the identically-named collection of Ron Hansen short stories I initially hoped it was, at least possesses the same wintry, intellectual mien.

Dern is Woody, an elderly Montanan who believes a sweepstakes entry has informed him that he's won a million dollars, contingent on his ability to return the letter to the sweepstakes' home office in Lincoln, NE. He sets off on foot, defiant in the face of harridan wife Kate (June Squibb, brilliant) and worried sons David (Will Forte) and Ross (Bob Odenkirk), until finally David, a home sound-system salesman, agrees to drive Woody from Billings to deep in the heart of Huskerville. It's the journey, of course, and along the way David is introduced to his father, and he to him, as adults in all the small, often humiliating, occasionally noble peculiarities that comprise adults. A stopover in Woody's hometown introduces old bully Ed (Stacy Keach) and old flame Peg (Angela McEwan), who knew it would never work out with Woody because she "wouldn't let him round the bases." They're all beautifully-realized, beautifully-scripted performances: Ed holding court before a gathering of cronies in a bumpkin watering hole; Kate pulling up her skirt to show a long-dead admirer what he could have had if he'd stopped talking about meat once in a while. The film only ever really stumbles with a pair of Tweedle-Dee/Tweedle-Dum cousins (Kevin Kunkel, Devin Ratray) who function essentially like the black chef in Sullivan's Travels. When they're the focus of a late-film plot point, the nature of their contrivance is obvious.

Still, Nebraska's grace is in the ways the relationship evolves between Woody and David--in the gradual discovery that Woody isn't a crotchety old guy cliché, but a man broken by a lifetime of meekness taken advantage of by the small-time predators in his Midwestern town. His quest isn't driven by adorable dementia, then, so much as one last chance to be special in a life spent ordinary. Kate's crustiness comes clearer, too, as Woody's armour, while David, following a series of acts (one of violence, two of generosity) and lies that fool no one, demonstrates in a lovely metaphorical gesture everything that need be said about fathers, sons, the gulfs of misunderstanding separating them, and the bridges that can yet be rigged.