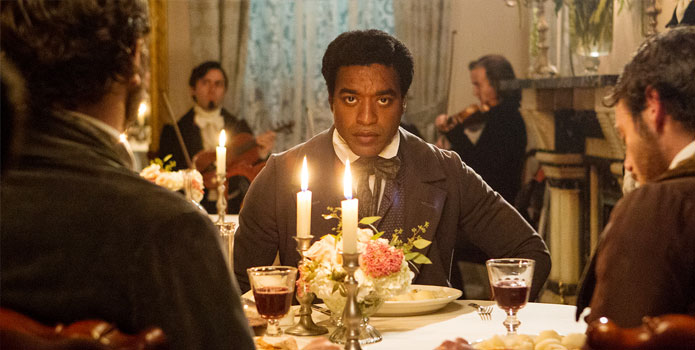 by Walter Chaw With performances this good, with a director this astonishing, the only thing that could make it less than transcendent, I'm afraid, is source material so well-respected, so revered truth be known, that it limits the places the cast and director might otherwise go. What I'm saying is that the prospect of Steve McQueen making a slave narrative is one to savour, celebrate, induce chills in the hearts of every serious scholar of cinema as experiential philosophy--and the prospect of Steve McQueen adapting Solomon Northrup's (as related to white lawyer David Wilson) 12 Years a Slave is one to inspire some level of inevitable disappointment. What I expected was to be blown away by Michael Fassbender and Chiwetel Ejiofor's performances--and I was. What I didn't expect was to be disturbed by a few instances of manipulation of the document that seem driven by something other than good faith. Why, for instance, would one portray the death of a black conspirator on a slaver ship bound for Louisiana at the hand of a white crewman about to rape a sympathetic figure, when the document reveals this conspirator was taken by smallpox? For the sake of drama? Were the roles reversed, this kind of narrative manipulation would take on a decidedly different hue.

At the end of the day, the problem with 12 Years a Slave is that it's neither fish nor fowl: neither a Steve McQueen film the equal of the abstract existential artistry of his Hunger and Shame, nor a straight costume adaptation without room for challenge. If we can agree that slavery is inarguably among the most despicable things one human being inflicts on another--a stain indelible on our national character that lingers to this day in the bland ignorance of people like Paula Deen and her supporters--then we can proceed to a conversation about how 12 Years a Slave is a prestige film poised to gather awards for its subject and handsome presentation, and not necessarily a prestigious film.

Solomon (Ejiofor) is a freeman living in the North who, through trickery, he is abducted by slavers and sold into servitude for the titular twelve years. Among his owners are benevolent Master Ford (Benedict Cumberbatch), psychotic Master Epps (Fassbender), and Epps's harpy wife Mary (Sarah Paulson). The film, as episodic as the source, tells of how Solomon perseveres while presenting conspicuous, invented platitudes like "I don't want to survive, I want to live" that announce it as not just a John "Red Tails" Ridley construct, but also an unfortunate betrayal of 12 Years a Slave's opinion of its audience. How would the film differ with McQueen scripting, as he did his other films? What if the picture had trusted silence rather than indulged in broad gallows ironies? Consider, too, that Northrup's narrative recalls that during his time borrowed out to Judge Turner (played by Bryan Batt in the film), he was transferred:

"from the field to the sugar house, to act there in the capacity of driver. From the time of the commencement of sugar making to the close, the grinding and boiling does not cease day or night. The whip was given me with directions to use it upon any one who was caught standing idle. If I failed to obey them to the letter, there was another one for my own back." p.194

Northrup's role as "driver" is diminished in the picture, referred to briefly as "finding favour" by the despicable Epps and glossed over in the most difficult sequence, the torture and humiliation of poor Patsey (a fine, thankless Lupita Nyong'o). The ethics of using Patsey as the sole vehicle to further Solomon's moral compromise is itself a moral compromise. In the book, Solomon whips her around forty imes--in the movie, and I didn't count, I'd say it was around ten. With the picture earning praise for its unflinching approach to violence, this sure feels like a flinch to me. When Patsey calls out, "I'd rather it was you, Solomon!" in something that is again a Ridley invention, it has shades of Paul Verhoeven's savage satire of prehistoric patriarchal attitudes Starship Troopers, with "at least I had you, Johnny" escaping from a girl soldier's blood-flecked lips as she expires. Worse in some unnameable way is that the description of Patsey, post-devastation, as seen by her master as a "valuable and handsome animal" becomes on screen a description of Solomon. I don't believe that you should transfer martyrdoms--there's something essentially ignoble, not to say unnecessary, about that.

Lost, too, are all of Solomon's references to what he saw as the simpleminded servility of slaves--a theme that recurs as he, in madness, praises his tormentors, in particular the infernal Mistress Epps, who despite being "possessed by the devil, jealousy" (which caused her to act like a serial-killing high-school prom queen), still "[had] much in her character to admire." (p. 198). Much is made of Northrup's sense of humour in the book--if the film is funny at all, I missed it. It would've greatly benefited 12 Years a Slave if it had, in fact, something like that sense of perspective about itself.

12 Years a Slave is fascinating, ambiguous, sometimes contradictory, always incendiary, but 12 Years a Slave is absolutely tireless in its beating of the anti-slavery drum. No one in their right mind would argue that slavery is good, so, really, taking that as a given, what else is 12 Years a Slave saying? For me, what it says loudest is that Steven Spielberg would have directed this movie if he hadn't instead bought the rights to The Color Purple. I actually wish he had made it, if only to leave McQueen to do another, more personal project; failing that, the hope now is that the film's inevitable awards-season success (the rapes and whippings are decidedly tame compared to other church-group/book club-Bible study classics like The Passion of the Christ and The Girl with the Dragon Tattoo) means that someone as unbelievably gifted as McQueen will never have to be a gun for hire again. Every technical element of the picture is very good; it's also strident and obvious, so given to pontification that when saviour Bass (producer Brad Pitt) arrives with a speech delivered more or less faithfully from the record, it lands not with the freshness it does in the book, but with deadening weariness born of repetition. It's a very good movie that is neither special nor particularly challenging, not distasteful enough to inspire balking, and not riddled with ambiguity (like Django Unchained, for instance, which places uncomfortable fingers in every exposed ingress), engineered in many ways for maximum middlebrow payload. Hunger and Shame were mimetic where 12 Years a Slave is diegetic. Find in there all you need to know of its looming popularity, the irony being that I hope it serves to set McQueen free for his next go-round.

Strange that nobody has mentioned Mandingo, a much-maligned and important work from the 70s.