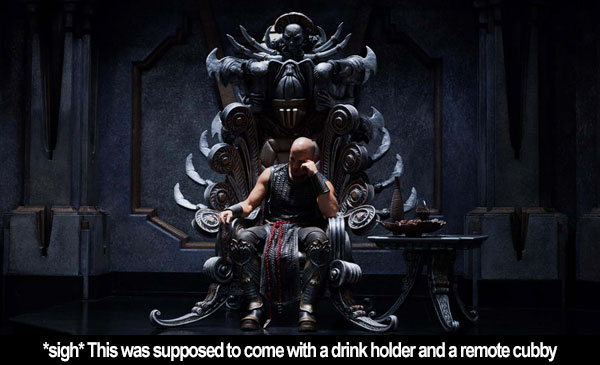 by Walter Chaw Maybe it was the anticipation, maybe it's because it's too much like the first film, Pitch Black, but David Twohy's Riddick is merely fine for what it is, lacking the kind of loopy, operatic invention of the franchise's middle course and contenting itself with being a bug hunt in the James Cameron sense of the word instead of exploring more of this universe. Not that there's necessarily anything wrong with that, but I wanted to love this movie with all my heart, having declared to everyone's exhaustion that of all the prestige movies prepping down the pike, this was the one I was waiting for. Turns out, the best science-fiction film of the last quarter of this year is Jonathan Glazer's unbelievably good Under the Skin--not Gravity and, alas, not Riddick, either. To be fair, of the three, Glazer's is the only one to deal with science-fiction as existentialism rather than as background and circus. More's the pity, because Chronicles of Riddick, with its elementals and fringe religions, its funky spiritualism and its sense of fairy-tale hyperbole, is one of the genuinely great cult films of the last decade. If not for an ending to Riddick that promises Twohy's ready for another swing at the plate if another ball is lobbed at him, I wouldn't be in a very good mood at all.

Riddick follows the titular hero, the last Furian (referred to as having "human pheromones" in a moment of midichlorian disappointment), as he's left for dead on one of those backwater planets that looks like Nevada by the treacherous Necromongers he conquered at the end of the previous film. There, in a fun prologue, he takes a page from Rousseau and rejects civilization in the pursuit of indulging his animal self: he tames a fierce space-dog and makes himself immune to the poisonous bite of a space-scorpion monster. Wanting eventually to leave the planet, he summons two teams of bounty hunters, one with grand, unctuous villain Santana (Jordi Molla) at the head, the other led by Boss Johns (Matt Nable), who's out to figure out what happened to his son, the Cole Hauser character from Pitch Black. Because I only saw Pitch Black the once, in the theatre, 13 years ago, I'd sort of like to know what happened to him, too. No matter, as attention fast turns to lovely Dahl (Katee Sackhoff), pronounced "Doll" and treated like a piece of meat by the men she regularly beats the shit out of, just for the principle of it. There are some gender gymnastics going on in here, complicated by Dahl's declaration that she's a lesbian (and by Riddick's promise that he'll be "balls deep" in her by the final reel), but I fear not much is ever made of any of it.

In fact, despite a pretty fair gore level and some satisfying nudity, the picture seems the product of a few compromises, most of them coming in its limited scope and unwillingness to make this antihero the unredeemable bastard we've come to love. It's the same fate that befell Eastwood's Man with No Name, the thing that prevented Eastwood from reprising his role in cameo form to be shot on the train station at the beginning of Once Upon a Time in the West. Even worse, Riddick's action sequences are shot too close and hyperactively-edited, and staged almost entirely in the dark to boot. The best action moment is the one captured in the trailers involving a sword, a promise, and a box--not coincidentally, it's well-lit. Filler includes crap like dog jokes and dog reaction shots, tough-guy talk, and a trip across the wasteland as beasties pick off the humans, one-by-one. It's all worth it, though, for a scene where Riddick, posed like a Frazetti death-dealer as hordes of pulp monsters tense and gather: it's a scene that understands that this character is now iconic in nature, at least for those in the know. As the movie ends, Riddick is at a crossroads, his choice to become a beefstick (which would be a shame) or a folk hero (which is what he was at the end of the last film). Let's hope this brief interlude makes enough to justify a course correction.

They didn't know he was Furian, they assumed human. And they were reading Falco's pheromones. Yeah, yeah, nerd alert!