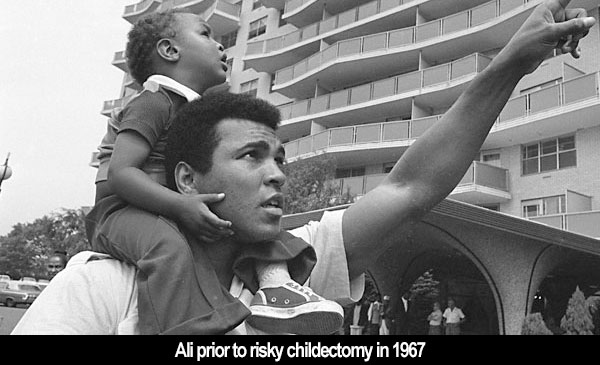 MONEY FOR NOTHING: INSIDE THE FEDERAL RESERVE
**½/****
directed by Jim Bruce

THE TRIALS OF MUHAMMAD ALI
***/****
directed by Bill Siegel

by Walter Chaw It's difficult to review Jim Bruce's incendiary, scholarly Money for Nothing: Inside the Federal Reserve (hereafter Money), because even as I was understanding the role of the Federal Reserve Bank for the first time in my adult life (how its adjustments of interest actually drive the economy of not merely this nation, but every industrialized nation in our rapidly-shrinking world), I found myself comparing the film to one of those informational videos that play on endless loops in Natural History museums. It's immensely educational...and dry as a soda cracker. What I find to be problematic about it is the same thing I found problematic about Al Gore's PowerPoint presentation An Inconvenient Truth: it's not really art, is it? Not to open that can of worms, but for me, as a personal demarcation, art inspires something like Kierkegaardian fear and loathing--existential trembling, yes: a mirror held to nature in all the myriad, alien, surprising, often terrifying forms that nature assumes. What Money does, and does admirably, is explain what the hell happened to the United States' financial institutions right around 1998 or so and continuing on into now--explain what the bailout was and how/why it affects the average American. Most fascinatingly, it explains how far in estimation the once god-like Alan Greenspan has fallen in the eyes of those who worshipped him. But while these are noble achievements, they're not enough.

This isn't to say that multi-hyphenate Jim Bruce doesn't try to spruce things up with clips from Harold Lloyd and Buster Keaton to illustrate his points, although those clips are only fitfully illustrative of the points he's trying to make. The movie's worst misstep is its use of a mushroom cloud as a visual corollary to the financial system's recent implosion: it's not really the same thing, you know, and the image, I fear, is evocative of a different kind of arrogance altogether. The irony of that moment in Money is it's the sort of hyperbole that brought the whole house down in the first place. Still, with its parade of Fed chairmen past and present, of bankers who are somehow celebrities now, all talking of warning signs missed and hubris indulged, Money works as a diary of collapse, a time capsule if nothing more. Again like Gore's picture, it's less a warning to be heeded than a statement for the record as Rome burns. Ending with a quick, minute-long montage of possible solutions (education! infrastructure!) that lands as almost laughable in our age of impenetrable cynicism, Money is a good economics-cum-history class that's made me feel more informed if not particularly edified in any other way. See it, in other words, as the cinematic equivalent of steel-cut oatmeal: good for you, but not delicious.

Then there's Bill Siegel's fascinating The Trials of Muhammad Ali (hereafter Trials), which approaches Ali's life from the perspective of his devotion to Elijah Muhammad and the Nation of Islam. It traces the public persecution of him for his beliefs and reminds in a few key sequences of just exactly how mean, how very vicious, Ali was towards opponents who refused to call him by his adoptive name. Also wildly educational, the film features extraordinary archival footage of Malcolm X and Ali speaking, verbally sparring, arrayed as antagonists eventually, with the one breaking from the Nation of Islam and the other becoming its most conspicuous proponent. It follows Ali's first, disastrous attempts at being a spokesman through to the refining of his patter, his confidence inflating in the public arena. I love Siegel's sly paralleling of Ali's fight preparation with his growth as a human being and a man of the world, beaten and brought low before emerging triumphant. Interviews with second wife Belinda reveal a vulnerable Ali, injured by open racism and the timeworn, never-out-of-style racist platitudes of "love it or leave it," while brother Rahaman is thrillingly ambiguous as a guy who's told his stories about his brother so many times that it's no longer clear if he's still feeling what he's feeling, or just going through the motions.

The best parts of Trials are the parts that meticulously document Ali's progress in the world--the parts where Siegel inserts bits of Martin Luther King, Jr.'s sermons as counterpoint to Ali's rhetoric and later intercuts King's ultimate support of Ali with news of King's assassination. Its greatest triumph is eliciting empathy for the black plight in America, then and now; it's easy to watch something like 12 Years a Slave and declare confidently that what white folks did to black folks is wrong--a lot harder to create a sense of personal suture with the rage and helplessness associated with racism through a protagonist painted as deeply flawed and, at least initially, driven perhaps more by impulse than by consideration. Ali at the beginning of the movie is a young, charismatic guy seduced into a system of belief. By the end, he's a sadder, still-charismatic guy who, through the agency of this film, remains capable of influencing thought and elevating the race conversation in this country by stripping away its inanities--Paula Deen and her Arendt-ian supporters, for example. What would she do in open debate/defense with Ali circa 1968? What is the proper response to a white woman seeing nothing wrong with fantasizing about an all-black serving crew wearing white gloves just like in the good ol' days? What, moreover, is wrong with her gaggle of mindless devotees? I would say that what's wrong is that they've never been challenged in their lifetime by someone like Muhammad Ali.