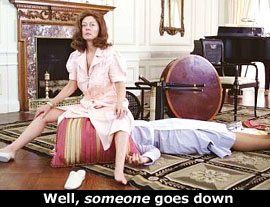 by Walter Chaw A battle between bug-eye theatre and dead-eye matinee, Igby Goes Down represents another post-Rushmore neo-Salinger debut (from hyphenate Burr Steers, nephew of Gore Vidal) that places an anti-establishment fish in a prep-school pond and surrounds him with a florid panoply of castrating mothers, Oedipal complexities, and evil schoolmates. In attempting to find new material in a genre that seems mostly played out (and played better by Wes Anderson and Alexander Payne), Igby Goes Down is another desperately overwritten Stygian coming-of-age melodrama à la another recent Kieran Culkin angst flick, The Dangerous Lives of Altar Boys.

Igby Goes Down splits its time almost evenly between the cartoonish intensity of Sarandon, Goldblum, and Harris and the dead-eyed glaze of Phillippe, Danes, Peet, and Pullman (whose character's nervous breakdown explains his catatonia to some degree). Needless to say, the film is interesting when the former school has the spotlight, markedly less so when the latter shamble to the proscenium. In fact, a mid-film cab ride featuring only Danes and Phillippe is one of the deadliest vacuums in recent cinema memory--a charisma vortex so unresponsive that I wondered for a moment if an intermission had been signalled. In the title role and redeeming the film somewhat, Culkin further establishes himself as a young actor with a certain edgy, intelligent quality deserving of better vehicles. He's this generation's Robert Downey Jr.--there's a glint in his eye and sadness in his demeanour that is utterly natural and involving. Culkin appears to be a meltdown waiting to happen.

Igby Goes Down never recovers from its laggard opening and the unfortunate decision to cast below-par actors in pivotal roles--the aggregate effect of all of these walking dead being a predictable one: horror alternating with dread. A moment where Sarandon delivers an edict around mouthfuls of vomit and another in which Goldblum goes postal on our tortured hero offer glimpses into what the film could have been while the younger generation's contributions serve mainly to inspire grief at the diminishing quality of our matinee idols. If there's a positive to be gained, it's the confirmation of Culkin as a talent to watch and the nagging suspicion that Burr Steers actually did pretty well given the unfair number of hurdles to overcome in his debut. Originally published: September 27, 2002.