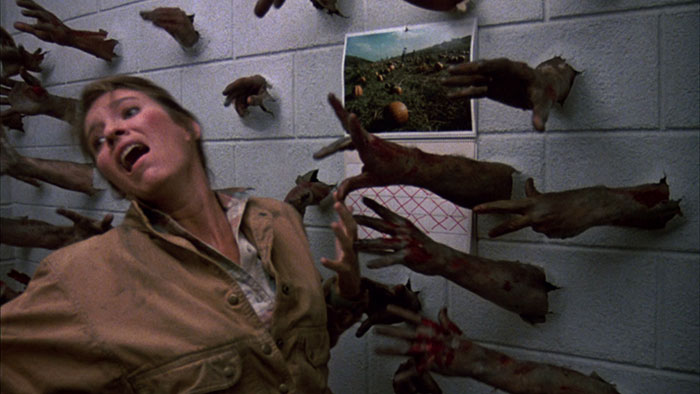 by Walter Chaw SPOILER WARNING IN EFFECT. Far from the weak sister that critics and fanboys have branded George Romero's conclusion to his zombie trilogy, Day of the Dead is at once the most hopeful and the most melancholy of the trio while falling short of the stark satirical perfection of the first (Night of the Living Dead) and the bloated satirical imperfections of the perhaps over-celebrated second (Dawn of the Dead). In fact, I find Day to be the equal of Dawn in almost every way and to exceed it in terms of its alacrity--its relative tightness in the development of its ideas about the nature of man unfolding against the backdrop of a rise of a new society. The obvious precursor to the zombie mythos is the Christian faith, with its saviour a zombie installing a new order (covenant) with its key ritual dedicated to a celebration the eating of the saviour's flesh and blood: a literal consumption of the Host that incorporates into its rite terms of infection and contagion. In fact, Day of the Dead, of the three, seems the most serious in exploring that spiritual/thaumaturgical connection with the introduction of what is essentially a demigod--an offspring of thought and body in the same way that Christ was meant to be God made flesh in all its weakness--in the form of the much-reviled Bub (Howard Sherman).

The prisoner/guinea pig of mad Dr. Logan (Richard Liberty), Bub is secreted away in an underground bunker with a collection of scientists and military that, by their dual natures, sets up another dichotomy between mind and meat. The surface of the planet probably overrun by flesh-eating zombies, these survivors, their numbers ever-thinning, start to fly apart in the maelstrom of conflicting philosophies and the steady snuffing of hope. While the military advocates a campaign of extermination, the scientists seem willing to play with the idea of a cure--with the never-spoken hope, perhaps, that there could one day be something of a détente between the humans and their inhuman predators. The relationship between man and eater-of-man, then, is a fascinating one in that the superiority of each over the other in their respective positions (civilization vs. hunger) is never in question (serving to explain, at least thematically, why the shuffling zombies are always able to catch the fleet humans), and so Bub, as he learns to appreciate Beethoven and Stephen King and eventually avenge the death of his creator, becomes more a Promethean creation than a Frankensteinian (Dr. Logan's unkind nickname).

Sarah (Lori Cardille) is the only woman of the survivors, a civilian voice of reason saddled by the twin horns of being female and sleeping with a "spic," the emotionally fragile Salazar (Anthony Dileo, Jr.). The power of Day of the Dead is that its satire is focused not as specifically as the consumerism of its direct predecessor nor the civil rights struggle of its primogenitor, but rather has a broader allegorical concern about the existential crisis inherent in the nature of man, represented here as a creature that literalizes the mission of the mind to leash the urges of the body. A scene where Bub grabs Dr. Logan's arm, only to release it when he hears the opening strains of the "Ode to Joy", is as literal and, in its way, heartbreaking as any moment in Romero's trilogy: its humanism, and the gravity of hope that causes man to search for the soul in soulless places, is affecting and powerful. Bub also represents the problem that many have with Day of the Dead in that Romero seems to be departing from the hopefulness of the first two films inherent in the idea that man is man and zombie is zombie--muddying the distinctions by essentially making Judith O'Dea's undead brother suddenly take on the responsibility of remorse with the possibility of mercy.

That injection of hope proves to be the cruellest stroke of Day of the Dead by declaring that no matter the rosiness of the picture's desert island conclusion, no matter the intoxication of dreaming (and this film features a couple of genuinely haunting dream sequences), there is at its heart no escaping that man nurses monsters at his breast--that any one of the men, at any moment, can become one of the enemy in action or flesh. In this way, the madness of men in a guerrilla war of attrition is commented upon, complete with an examination of atrocity and perversion, while the realization of a common humanity, as it so often does, comes too late. (Day of the Dead is more the continuation of Romero's The Crazies in thought than the other zombie pictures.) That blindness to our slide into the primitive--the polarized tribes of thinkers and warriors--renders the humans of Day of the Dead the enemy doomed to self-destruction and the zombies the post-modern casualties to our modern cultural apocalypse. It's Invasion of the Body Snatchers and the pods are the heroes. Though Day of the Dead ends with a bloodbath only surpassed in modern mainstream genre memory by John Carpenter's amazing The Thing, the picture is more involved in existentialism and gender/political divides than bloodletting, and though Tom Savini has justifiably identified this film as his masterpiece, so too has Romero identified it of late as his favourite of the Dead films.

THE DVD
Anchor Bay is the king of genre pictures; that there are a few contenders out there now (Blue Underground springs to mind) speaks volumes of the influence this distribution house has had on the industry. With Day of the Dead, though they've courted controversy by using a slightly tweaked dialogue track (six small changes, none substantive), Anchor Bay produces what should be the definitive DVD release of the picture, two DVDs packaged in an innovative "Bub-cro" gatefold that houses a wonderful booklet containing an essay by Michael Felsher (left). The first disc finds the picture in a lovely 1.85:1 anamorphic widescreen transfer made using a HiDef conversion process Anchor Bay calls "Divimax." If the image suffers from a bit of edge enhancement, it nevertheless blows away that of every previous home video incarnation of the film. Dolby Digital 5.1 EX and DTS-ES 6.1 configurations of remixed audio feel a little like overkill, but little complaint can be made of the fidelity with which they pipe music and effects throughout the soundstage. A very fine 2.0 audio mix is also serviceable and may even have the advantage of reproducing dialogue with slightly more clarity.

The first disc also houses a pair of feature-length commentary tracks, the second of which, from filmmaker Roger Avary (one half the team that wrote Pulp Fiction and director of the underestimated Rules of Attraction), is disposable fanboy fare indicated by a lot of fawning and reverential silence. The first supplemental track, however, features Romero, Savini, Cardille, and production designer Cletus Anderson; warm and informative (if not extravagantly so), the yakker details some of the budget problems attached to an unrated feature that forced Romero to pare down his huge vision to this claustrophobic character study. While I might theoretically enjoy a battle between trained zombies and the free-range variety, Day of the Dead is pretty special just the way it is.

Find on the second platter a new 40-minute documentary, "The Many Days of Day of the Dead". Although it unfortunately regurgitates much of the commentary, it's the very definition of an expert info-piece that resists the temptation to recap and self-congratulate. Thirty-one minutes of behind-the-scenes footage, sans dialogue, of Tom Savini and his mad crew creating their astonishing make-up effects (in the "Many Days" docu, Savini repeats a story from legend that has his idol Dick Smith calling to ask, "How'd you do that?") is ported over from the Elite LaserDisc and an audio interview with Richard Liberty is fun for the completist. Outdoing themselves, Anchor Bay has dug up a promotional video for the mine/storage facility where Day of the Dead was filmed, and rounds out the DVD presentation with a typically well-written/well-researched bio for Romero, numerous trailers and TV spots, a breathtaking wealth of stills galleries and production/promotional images, and a DVD-ROM offering of Romero's fascinating original screenplay as well as various production memos. All in all, I can't say enough about the disc, the film, and Anchor Bay: The picture isn't for every taste, for sure, but for it to be treated with this level of respect and seriousness is a shot of adrenaline to a jaded cineaste's heart. You owe it to film to support this company--and to yourself to give Day of the Dead another chance. Originally published: October 3, 2003. 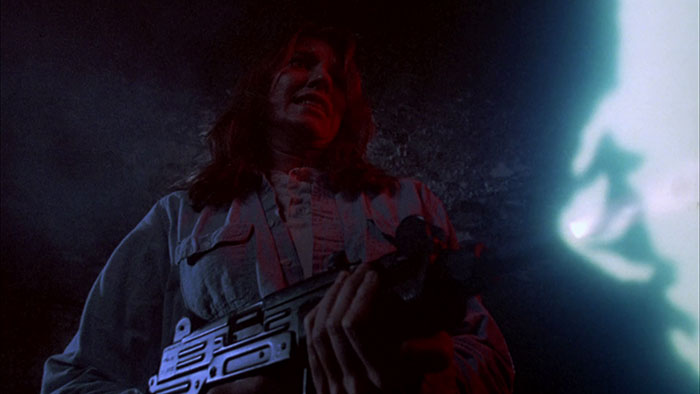 THE BLU-RAY DISC
by Bill Chambers Scream Factory's Collector's Edition Blu-ray of Day of the Dead features a different transfer than the Anchor Bay release, which came out very early in the format's history and seemed to leave a lot of people dissatisfied. I never saw it myself, but the common complaints were a dirty source print and too much black crush, neither of which are in evidence on the new disc, whose 1.78:1, 1080p presentation is the best this movie could hope to look without scrubbing all the lo-fi '80s charm out of the image. Day of the Dead has a fine-grain, glassy look in this incarnation, along with a ripe, natural palette and excellent dynamic range. It's a little soft and grubby per aesthetics of the auteur/genre/era, but every ounce of artistry and technique has been brought to the fore; that the first few opening titles are out of register, almost like 3-D without the glasses, is a troubling artifact that proves very temporary. Comparatively disappointing, the 2.0 DTS-HD MA mono audio sounds flat and thin, with Terry Alexander's dialogue, in particular, full of sibilant s's. Strange that the DVD's surround-sound remixes were abandoned--maybe they were proprietary to Anchor Bay.

Extras-wise, the disc recycles most of the Divimax DVD's bonus content save Michael Felsher's "The Many Days of the Dead", replacing it with an all-new Felsher retrospective, the feature-length, slightly more elegiac The World's End: The Legacy of Day of the Dead (85 mins., HD). Nevertheless, it inspires much déjà vu, although the actors' appearances have changed even more radically over the past ten years than they had in the 18 years between the film and the previous making-of. (White-haired, orange-skinned Anthony Dileo Jr. is unrecognizable, while Joe Pilato seems to be morphing into George C. Scott from Firestarter.) George Romero, for his part, sets the record straight about his original script, insisting that he never regretted sacrificing some ambitious action sequences to get final cut because they were ultimately irrelevant to the story he wanted to tell. On the other hand, DP Michael Gornick clings to the notion that the film is an artistic compromise angrily manifesting itself on screen in an allegory for Romero's troubles with financier Salah M. Hassanein. Romero also says Day is his favourite of the series, followed closely by Survival of the Dead; hard to believe Survival didn't exist at the time of the old documentary, and that he's completed three Dead pictures since then. Most of the B-roll in The World's End is taken from Tom Savini's videotaped home movies, again included in full. Rounding out the new material is "Underground: A Look Into the Day of the Dead Mines" (8 mins., HD), one of those then-and-now set tours that turns into an oddly moving farewell address by Skip Docchio, the facility's retiring operator, who has fond memories of the production as well as his decades underground. The only other supplement dropped for this Collector's Edition was the ROM-based screenplay. 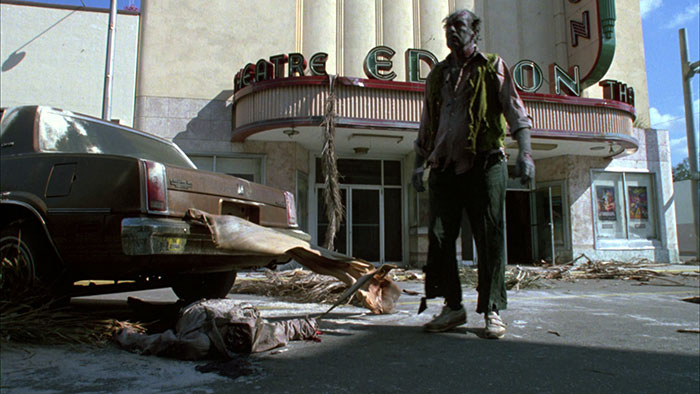