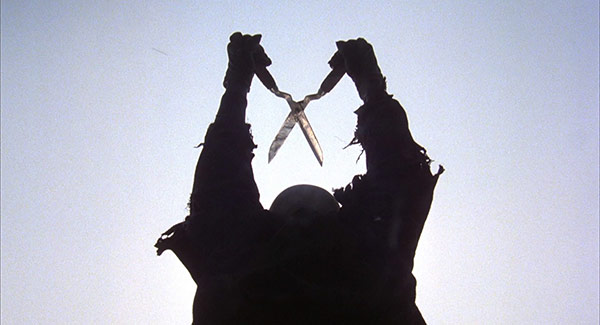 by Walter Chaw The pleasures of Tony Maylam's The Burning, such as they are, arise when one engages it in an extra-textual conversation about why at the end of the American '70s there suddenly bloomed an exploitation slasher subgenre to provide a nihilistic gateway into the Reagan '80s. Really, when you look at the wonderland of '80s blockbuster cinema, there is throughout an undercurrent of Friday the 13ths and Elm Street flicks, of course, but also stuff like Slumber Party Massacre, Prom Night, My Bloody Valentine, Maniac, Camps Cheerleader and Sleepaway, Mother's Day (which Roger Ebert referred to as a "geek" show--the kind that bit heads off chickens, not the kind that founded Apple)...all the lurid VHS covers that made browsing the neighbourhood rental joint such delicious taboo delight. It's that thrill that The Burning captures and evokes still--that feeling adolescent boys of a certain age got, pre-Internet, by renting something they shouldn't rent with the suspicion, nay, promise, it would provoke the same erotic tingle as hardcore porn would in a couple years' time. It's a movie very much like Tolkien's writing: if you don't discover it in junior high, you'll never appreciate it the way it was meant to be appreciated again.

Utilizing the regional Cropsy folktale for some reason, The Burning depicts Cropsy as a Podunk camp caretaker whom a quartet of merry tricksters decides to scare with a rotting skull. This leads to them somehow setting Cropsy (Lou David) ablaze, and then to a weird sideshow at a hospital years later that apparently results in Cropsy going back to the woods of his torment (and former employ) in order to, um, kill vacuous teenagers for having sex, I guess. It's worth asking where our jokesters got the wormy skull with which to startle, then inadvertently immolate, Cropsy...but no one ever does. The origin story is the same as the one for Freddy Krueger, basically, but credit to Wes Craven for making it infinitely more interesting. Here, though, there's more pathos than horror--it's essentially the tale of a gimp bullied by the "normals," thus instantly casting all the people about to be butchered as deserving it. The legend behind the making of the film is that the Weinsteins (yes, those Weinsteins), wanting to capitalize on the success of Friday the 13th, rushed The Burning into production. If true, they must have hurried, as the picture was shot in the summer of 1980 and the first Friday the 13th was released in May of that year. More likely, the similarities to Sean S. Cunningham's underwhelming flick are entirely attributable to the sort of parallel genesis that happens in film art when zeitgeist dictates, say, five body-switching movies in a row, True Believer and Flashback within months of each other, or, in this case, a few years of near-identical slasher flicks. For a brief period, The Burning was what every teenaged moviegoer wanted: something to do with prurience; a little to do with gore, sure; and lots to do with sex.

In that, at least, The Burning delivers with regular, loving, gratuitous shots of young women topless, bottomless--I can proudly say that the first time I saw a woman's pubis was watching this and Revenge of the Nerds the same summer on home video. Who needs sex-ed when there's VHS? It's a peepshow, no question, but a peepshow padded (like Revenge of the Nerds and others of that ilk: The Last American Virgin, Porky's, even Weird Science) with compelling-for-the-target-demographic bully/popularity adolescent political melodramas. It's different in that way from straight-up rape-revenge scenarios like The Last House on the Left or I Spit on Your Grave, in that the bulk of slasher flicks engaged on some level in this need for teenagers to make their way through pubescent thickets into adulthood. It's possible to read Halloween--the best of them, without question--as a fairytale not unlike The Wizard of Oz (no less frightening for its target age group) where the protagonist/"final girl," surrounded by aspects of her unconscious, navigates her way to the safety and relative mendacity of "home." The main difference is that slasher movies were less oblique about their sexual subtexts.

The Burning is basically the story of two ugly, outcast males (Cropsy and his analogue, dork Alfred (Fast Times at Ridgemont High's Brian Backer), exiled from "polite" teen society for doing what all of us do: peeping) who are incapable of closing the deal with the objects of their torment/desire. The whole film, really, is about sexual frustration, giving the title a poignant double-meaning in addition to providing a pretty fair blueprint for the entire subgenre. In her landmark book-length analysis of the slasher flick Men, Women, and Chainsaws, Carol Clover brings up an interesting phenomenon with regards to the "final girl" trope in that although the viewers of these pictures are traditionally adolescent males, they are asked by the end to identify with a virginal girl. Clover's more eloquent on the subject than I am (so is Alex Jackson in his tour de force examination of the Friday the 13th franchise), but what's interesting about The Burning is that its "final girl" is, in fact, mouth-breather Alfred, who, in the course of his increasingly-agitated blue-balling, gets the chance at the end to be the hero of the piece alongside handsome Todd (Brian Matthews). The heavy use of POV suggests the movie's debt to Halloween's legendary prologue, of course, but it also indicts the audience (as that film did, and brilliantly) as aligned in their frustrated sexual yearning. The Burning is that scene in Animal House where John Belushi peeps into a sorority and falls over backwards; there's no gender ambiguity here, another exhibit in the case that the Weinsteins were then literalists, as they are now.

The gore effects by a young Tom Savini are fun in the way all of Savini's effects work is fun. It's do-it-yourself amusing--the invention inherent in their creation is easy to backwards-engineer to a degree (is that a squeeze-bulb? Hollow knife? Where does the latex chest start?), and a celebrated scene on a canoe, featuring an impossibly-young Fisher Stevens getting liberated from his fingers, offers a nice, daylit opportunity to do so at length. What's missing is any real lore beyond the "Cropsy" name: why the hedge-clippers, for instance? What's the anniversary being "celebrated" here? It's not even particularly clear that there's any significance to the events of the film beyond a general conversation about how dangerous (young) men can be when they're sexually frustrated. The Burning is about being frightened, inexperienced, and on the verge of--or at the very beginning of--becoming sexually active. It's about horniness, the fantasy of punishing the jocks and the Heathers in equal, extravagant measure, of dressing up like, say, Darth Vader and having fantastic sex with the head cheerleader on a replica of the moon. 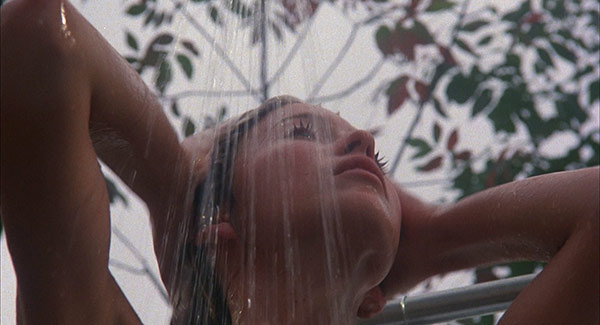 THE BLU-RAY DISC
Scream Factory brings the uncut (zing!) version of The Burning home on a two-disc set that includes both DVD and Blu-ray pressings in one convenient, slip-covered package. The Blu-ray contains a 1.85:1, 1080p transfer that wisely chooses to clarify how low-budget it all was instead of trying to impose too much slickness on the film. Preserved is that particular, skeezy '80s video quality that makes The Burning and its contemporaries what they are; grain fluctuates from dense to mottled while fleshtones have that peculiar, era-specific pink patina. The source materials are in great shape, however, and there are no digital artifacts impeding the image. An attendant 2.0 DTS-HD MA track is nothing spectacular--definitely not scary. The first of two commentaries has British film critic Alan Jones interviewing director Tony Maylam in a sometimes-scene-specific yakker that goes long on the self-deprecation and occasionally, passively takes the Weinsteins to the shed. It's filled with recollections of the shoot and the casting, spotting folks like Jason Alexander and Holly Hunter among a game cast of duelling youngsters. Overall, a fun listen, full of energy and verve. The second yakker, again with Jones moderating, features cast members Shelley Bruce and Bonnie Deroski, who give it the ol' college try in terms of offering some kind of analysis of the piece but lapse into uncomfortable silences, to be prodded gently by Jones as the picture winds down.

Featurettes begin with "Blood 'n' Fire" (18 mins., HD), a new interview with Savini talking in high-Savini style about how he did The Burning instead of the Friday the 13th sequel, but came on to the production at the last minute and therefore wasn't able to do a proper "geek" job on the climactic Cropsy unveiling. He's right--it looks a lot like Rick Baker's work on the same year's also-awesome The Funhouse: not good, necessarily, but cozily nostalgic. Fun B-roll inserts show Savini demonstrating how he set his own leg on fire. Meanwhile, Jack Sholder, director of the great The Hidden and editor of this one, reveals himself in "Slash & Cut" (12 mins., HD) to be pretentious and crucially-lacking in introspection and self-awareness. He says he wanted to be a poet, liked Russian novels, and drops Fassbinder in conversation as what he's really interested in. If not for The Hidden, I swear...

In "Summer Camp Nightmare" (7 mins., HD), the still-lovely scream queen Leah Ayres (7 mins.) touches on how she doesn't watch horror films ("Those images, I can't go there") and her own background as a starving modern dancer, while "Cropsy Speaks" (11 mins., HD) finds actor David recalling the whole thing with great fondness (he calls Savini's work on the film "magic"). "Behind the Scenes Footage" (8 mins., HD) isolates but recycles the vintage bits of footage from the Savini docu; the HiDef trailer plus semi-extensive make-up and promo stills galleries round out the generous presentation. 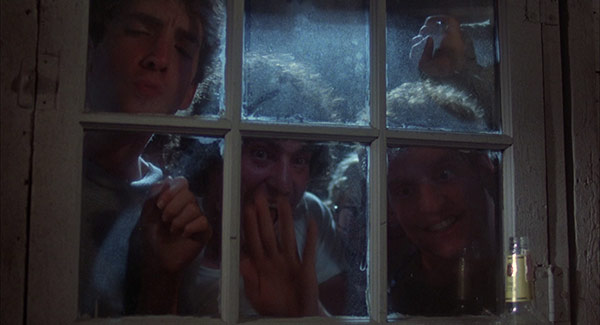 Another great review. "like Tolkien's writing: if you don't discover it in junior high, you'll never appreciate it the way it was meant to be appreciated again." -- I had it on vhs in high school, so naturally I bought the Blu-ray immediately.