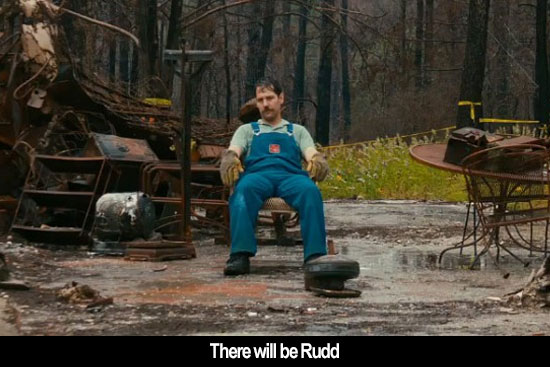 by Angelo Muredda The standard line out of Sundance on Prince Avalanche, David Gordon Green's tragicomic stop between the puerility of The Sitter and the Southern Gothic of his upcoming Joe, was that it was a return to form after some time spent in the wilderness. That's true enough insofar as its dashed-off buddy travelogue, a loose adaptation of the Icelandic movie Either Way, is sweet where The Sitter is cynical, but one has to wonder at this point whether any of Green's studio trifles can be considered outliers when their worldview is so consistent with the ostensible real deals. Even the least of his films shares a thematic interest with the others in redeeming wayward losers; by that token, Prince Avalanche isn't a triumphant comeback so much as a familiar motif recapitulated in a more pleasant, minor key.

The targets of Green's sympathetic energies this time are stoic, good-natured Alvin (Paul Rudd) and his girlfriend's overconfident dunce brother, Lance (Emile Hirsch). The two men are an odd couple, tasked with spending the summer of 1988 together painting over faded traffic lines on a Texas highway that's just been scorched by wildfires. That disaster, we find out in a horrific documentary set-up, displaced a good portion of the most impoverished locals, many of whom amble by the leads in a daze throughout, rifling through their damaged property as if waiting for a script to tell them where to go.

If the repetitive, stultifying labour of our dunderheaded protagonists doesn't do the job, the aimless improv of those nonprofessional bit players is surely meant to tell us we're in Waiting for Godot territory, a hell from which there's no exit. Where Beckett is committed to Vladimir and Estragon's terrible lot, though, stripping them to their basest selves and leaving them out in the open to dry, Green waffles, insisting on safely guiding his leads if not back home then to somewhere they'll be appreciated. That mushy humanism is tough to square with the film's loaded historical context--its evocation of the precarious lives of those who survived the Bastrop County Complex fire of 2011, which levelled over 1000 homes and resulted in at least two casualties.

Although Green never really left this thematic territory of emotionally-arrested male friends even in stoner comedies like Pineapple Express, Prince Avalanche is a literal homecoming in the sense that it comes back to the impoverished rural settings of his earlier work. Cinematographer Tim Orr shoots the hell out of Bastrop, Texas, finding an off-key lyricism in every muted splash of yellow paint and every heap of ash that used to be a home. Their visual sensitivity extends to absurd touches like the men's matching overalls, a Super Mario Bros. joke driven home by Rudd's bushy Luigi moustache. Yet for all those small pleasures, the cumulative effect is pretty flat. Alvin and Lance are likable enough, and it's nice to see Rudd giving up his Jack Lemmon routine of late to portray a slightly less affable, more inscrutable kind of guy, but he doesn't have a lot of notes to play beyond strait-laced frustration. Hirsch is fine, too, though Lance is little more than a foil, a guy you're supposed to root for to grow up once the movie's done, but no sooner. Green's good intentions aside, the locals are foils, too, salt-of-the-earth people whose authentic lives are meant to enlarge our view of a troubled patch of land we otherwise only see one dash of paint at a time. While their story is surely more interesting than Alvin's and Lance's, you get the sense Green doesn't feel worthy of telling it.