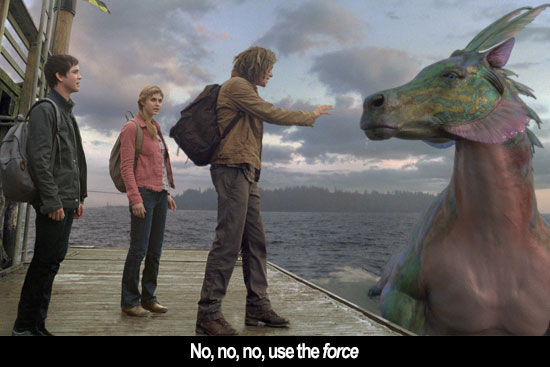 by Walter Chaw Say this about Thor Freudenthal and Marc Guggenheim's Percy Jackson: Sea of Monsters (hereafter PJ2): you're more than justified in questioning its existence, but at the end of the day it's impossible to make something this bad by accident. No, it takes genuine inspiration to be this tone deaf, to create something that requires intimate knowledge of the source novel or the first film in this benighted franchise yet will instantly piss off the teenies who love the Rick Riordan books and the far fewer souls who liked that first movie. For me, because I love my 9-year-old daughter with all my heart, I endured PJ2 and only thought about walking out a half-dozen times before resigning myself to the murky 3-D and even murkier execution. Yes, it's awful, that much is to be expected, but that it's significantly worse than a movie that was already terrible by nearly every objective standard is really some kind of accomplishment. At the end of the day, when a 9-year-old articulates that what's wrong with the film is that they took out all the relationship stuff, cherry-picked crap from other novels to contrive a half-assed cliffhanger for a sequel that will likely never happen, and basically fumbled the promise of the title, well...at least PJ2 can claim the distinction of awakening the critical facility in a child who, before this, thought every movie was pretty good.

For the uninitiated, Percy (adorable Logan Lerman) is "Perseus" of Greek-myth fame: son of Poseidon, and saver of the universe in the previous instalment. In this sequel, he's asked to save the universe. His cohorts are comely Annabeth (adorable Alexandra Daddario), loyal African-American sidekick/satyr Grover (Brandon T. Jackson), and introducing Percy's half-brother Tyson (adorable Douglas Smith), a cyclops all the other freaks in the film somehow find it in their hearts to hate for being different. Their mission, and they choose to accept it, is to travel to the Bermuda Triangle (a.k.a. the "sea of monsters"), where they encounter a bastardization of the Charybdis from The Odyssey; Polyphemus (Robert Maillet), bastardized from The Odyssey as well; and Titan Cronos in the Ark of the Covenant from some bullshit children's author who made a fortune fusing Edith Hamilton with Judy Bloom. It's the Scholastic version of Pride and Prejudice and Zombies, for what it's worth. Not content, by the way, to have the Stepin Fetchit character be literally half-goat, they devise a reason for him in this one to dress up in a maid's outfit. At least he's not threatened with hilarious rape as he was last time around.

The moral of the story, such as it is, is that family is important and, um, appearances are skin deep, I think. The plot is disjointed, barely a narrative at all so much as a series of things that happen in a roughly linear fashion. Linearity isn't a prerequisite, of course, but PJ2 is also not non-linear enough to be artful. It's just, you know, a failure on all counts. Consider a manic ride in a New York yellow cab piloted by a sassy bastardization of the Graeae, transformed from one of the more fascinating branches of the Greek pantheon into a repugnant comedy act that plays like a cheap ripper of the Night Bus from the third Harry Potter movie. To the picture's credit, early on there's a fairly disturbing child murder; to its detriment, that's pretty much the only thing here that has anything like an edge. The perfunctory bitch antagonist (Leven Rambin) becomes pliant and meek for no discernible reason, and a battleship full of Confederate zombies is absolutely squandered. Dialogue is juvenile and mostly functions as a bridge from one nonsense event to the next, and while the young actors do their best to breathe some life into this thing, it has the reek of desperation and an almost complete confusion about the reasons behind its own existence. PJ2 is a lot like the third Narnia movie, or any of the films in that embarrassing Ayn Rand series--pictures that happen without any real awareness or excitement, fuelled by a small cabal of perhaps-fanaticals/perhaps-opportunists identifying some phantom demographic eager to throw money at anything with a brand, however niche. Maybe they're right. I hope they aren't.