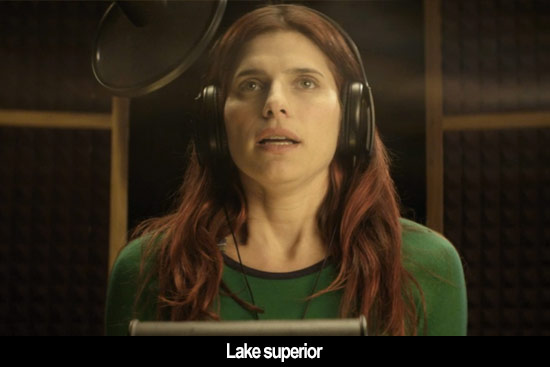 by Angelo Muredda If In a World... seems a bit busy, it's because it has a lot on its plate. The feature debut from "Children's Hospital" star, narrator, and sometimes-director Lake Bell, the film displays all the classic calling cards of an under-appreciated multi-hyphenate talent's break for the mainstream: a plum starring role, punchy dialogue, and a high concept. That conceit, of a female voiceover artist moving up within the ranks of a tetchy, male-dominated industry, comes with its own baggage, instantly reminding us of the relative scarcity of high-profile American comedies shepherded by women. It's a lot for a first feature to take on, and what most impresses about In a World..., which manages the neat trick of being both funny and thoughtful without tipping into melodrama, is its apparent effortlessness--the impression that Bell is casually navigating complicated territory.

Bell plays Carol, a voice coach and occasional dubbing master (for the accent-challenged Eva Longoria, no less) who hopes to take the next step into a cushy career as a trailer narrator. As we learn in the faux-documentary credits, the business belongs to men like the late Don LaFontaine, who seemed to stamp the titular phrase on virtually every major studio release in his prime. While the line was ceremoniously retired with his passing, at least in Bell's parallel universe, LaFontaine's baton is the gold standard in the business passed not to women like Carol--Melissa Disney, who shows up in a small role, is still the only woman to have narrated a big-budget trailer (for Gone in Sixty Seconds)--but to blowhards like Carol's own father Sam (Fred Melamed, himself an established voiceover artist) and his slimy protégé Gustav (Ken Marino). Tradition aside, Carol soon starts booking trailer work through her own gumption, talent, and good luck, and ends up in the running for a coveted Hunger Games knockoff that pits her against her father and Gustav.

There's rich material to be mined from this family and industry drama, but Bell treats it as one of several alternating narrative lines, sometimes approaching her script as an accelerated outline for an entire HBO series. The film spends as much time on the romantic travails of Carol's sister Dani ("Enlightened"'s Michaela Watkins), caught between a stale marriage with sound editor Moe ("Children's Hospital" creator Rob Corddry) and the possibility of a fling with a studly Irish gadfly played by "Life on Mars" star Jason O'Mara, who's a bit cutely credited as Mr. Pouncer. Less naturally, it makes room for a subplot involving Carol's burgeoning interest in voiceover guru Louis (comedian Demetri Martin). That most of these actors are jobbing TV folk, successful despite having never quite become household names, seems critical to Bell's more covert but winning agenda, which is to launch her ensemble of friends and colleagues into greener pastures. As much as her debut bears the hallmarks of a traditional romantic comedy, then, with Carol positioned as a late-blooming woman coming into her professional and personal best in her mid-30s, Bell seems more interested in directing a generous actors' showcase for her ensemble.

This is a smart approach, though it isn't without its drawbacks. The attention to Watkins and Corddry, both of whom are excellent, necessitates a more superficial portrait of the voiceover world than most would expect after the historical survey offered by the prologue. It's hard to get a read on just what kind of coin people at various levels of the business make, and the script is oddly mum about the fact that most voiceover artists, including Bell and Melamed, tend to work as actors, too. One also wishes the film's politics were better developed: Carol's vocal-training class is targeted, as indeed the whole movie appears to be, towards correcting women who speak in a so-called "sexy baby voice," so that they might finally "sound like women," as Carol says in the triumphant coda. The sentiment that professional women are trained on a daily basis to defer to men is a bold one in a commercial comedy, but it comes bound up with an essentialist tone that smacks of Tina Fey's brand of normative feminism--the kind that differentiates between real women and girlish pretenders.

Yet these are relatively minor concerns about a film that has such a deep reserve of talent, starting with Bell herself. It's cliché to speak of auteur-stars as triple threats, but Bell really is equally adept at marshalling her cast and composing tableaux for her own lanky body to traipse through. Despite the script's fixation on Carol's measured, authoritative voice, Bell registers as a fully-embodied, limb-flailing comedienne in the Julia Louis-Dreyfus mode--albeit a head taller. If it's a bit difficult to swallow the dumpier phase of the Pygmalion story she's built her character around, Carol's eventual success feels prophetic of Bell's next steps in the industry.

Lake Superior indeed. First fell in lust love with Bell via the mad genius of CHILDREN'S HOSPITAL first season (specifically her 11 out of 10 bod, her loony narration, and the fanboy wank send up of awkward lesbianism with Errin Hayes (another female comedic treasure) that ends in a sneeze instead of a smooch), and then I started reading up on her and my instant crush was rewarded with witty interviews, keen observations, and, yeah, fuck it, the cummina cummina cummina photo shoots (lanky, athletic, and blessed with tits that I imagine make other women angrily curse genetics or the boob fairy).

When I heard she was multihyphenating with an indie pic with a nifty pitch, as a lover of animation and VoiceOver actors I was ecstatic, and the not quite glowing but solid reviews means I don't have to feel all creeptastic when I eventually rent the film.