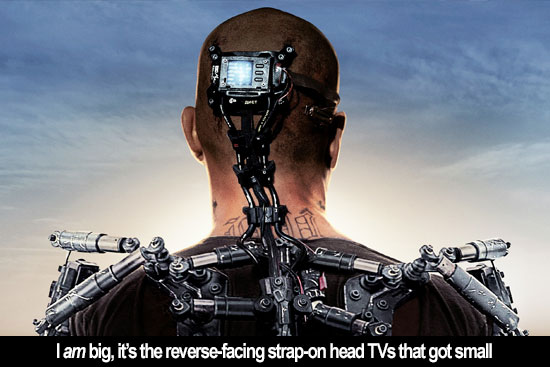 by Walter Chaw Lost in the hue and cry for meaning in film is the truism that having a message does not necessarily denote meaning. Case in point, District 9 helmer Neill Blomkamp's left-wing screed Elysium, which feels, unpleasantly, like having lunch with Sean Penn and all the filthy, proselytizing, self-martyring glory that implies. It's also like that lunch Indy forces Willie Scott to eat in Temple of Doom: Mmmm, condescending! It's unashamedly pushing an agenda, and while it does a better job of that than Star Trek Into Darkness, it's arguably more frustrating because so much of it demonstrates a bracing nerd-topia of tech wonders and genre references. Indeed, Elysium is the closest we've come to seeing a big-screen adaptation of Ursula K. Leguin's astonishing The Dispossessed. Which is to say, not very close at all, but there you have it. A pity, then, that armed with so able an action star as Matt Damon, the movie finds itself at the end more comfortable in a double-feature with Promised Land than with The Bourne Identity. Damon's at his best as a hero in the act of discovering his own potential, see--and absolute bollocks as political philosopher and activist. Times like these, I think Team America: World Police was right about him all along.

Damon is Max, a blue-collar schlub pulling a lever in a blasted, brown 2154 Los Angeles (which looks like 2013 Detroit) on an Earth-bound dystopia laced with favelas. Ruled by hordes of android cops (and electric parole officers), the people of Earth are exploited by the denizens of space station Elysium--a groovy mixture of ideas borrowed from 2001 and Silent Running where the wealthy have fled to live country-club lives of swimming pools and speaking French. (The proles on Earth, in the meantime, are reduced to Spanglish.) Max is mortally injured in an industrial accident and left for dead by an uncaring corporation, and after getting fitted with the most underused kick-ass exo-skeleton in the long Asian tradition of such things, he vows to infiltrate the orbiting Thurston Howell and Lovies for some instant-healing in a magic medicine box. Arrayed against him are evil thug Kruger (Sharlto Copley) and his boss, Elysium defense secretary Delacourt (a just-awful Jodie Foster); on Max's side are childhood girlfriend Frey (Alice Braga) and her cancer-riddled daughter (Emma Tremblay). Yes, in the middle of this occasionally gory, mostly-unpleasant space opera is an adorable, dying little girl in need of bwana to save her--and her people--from the Republicans. Oh, and poverty and injustice and stuff.

The first hour or so of the film is pretty awesome, as Max tries to walk the straight and narrow, shows off his boyish charm and penchant for dreaming when he runs into Frey by happenstance, and does something stupid to save his job in the workaday-struggle film I wish this movie was. Blomkamp's vision of the world after two films is consistent and compelling, but where District 9's politics hovered there as strong subtext holding together an innovative and vicious action film, Elysium's are so strident that they drown out everything else. The medical miracle boxes are programmed to only work for "citizens" of Elysium--therefore, Max's quest is to ensure that everyone on Earth is considered a "citizen" worthy of the benefits and rights accorded residents of Elysium. There's a scene where illegals are shot down on their way to "Heaven," with much made of the number of casualties suffered by a ragtag group of hard-working Spanish workers who just want a country-club membership. (In childhood flashbacks, it's shown that Max is illiterate while Frey is not (she's bilingual to boot), so who's the migrant scum now, Arizona?) This means, predictably, that there's an uplifting moment where it's revealed that now we're all citizens...of the world! And that we're responsible completely for one another's tired, poor, huddled masses yearning to breathe free the recycled, terraformed air of our spinning resort town. What Elysium does best is make the middle section of WALL·E subtle.

Foster, with a distracting accent that suggests this movie occupies the same universe as After Earth, delivers a Jack Nicholson/protecting-borders speech lifted entire from A Few Good Men, snarls, absolutely kills a nifty white pencil-skirt power suit, and has opportunity to use the phrase "Homeland Security," in case anyone in the audience didn't notice the hammer to their temple. Her Delacourt represents government gone wild, driven mad by the constant threat from below; she's a comic-book, distaff version of the Vulcan cabinet that led us to devastate a few already-fairly-devastated Middle Eastern countries--and yet there's still room in Elysium to attempt to correlate that mutated worldview to the current immigration debate, leaping internal logic by bounds (how do the baddies even find Frey? How, exactly, does the central MacGuffin precipitate a desired coup in Elysium?) in the headlong pursuit of almighty relevance. The unintended off-shoot is that in scolding the privileged for lacking charity, it also posits that the privileged are like gods, armed with godlike power, apparent omniscience (the drone debate trundles back into frame), and requiring of one of their own, Max, in an act of Promethean sacrifice, to bring metaphorical fire to the savages. The continuum of racism is charted on a closed circle; this one is wrong for being right.

I liked Elysium a lot. It felt like the slightly ADD 21st century remake of Paul Verhoeven's ROBOCOP, with all it's corporate brouhaha and on-the-ground grue; and a curious seasoning of Johnny Mnemonic in there, well, just because cyberpunk ain't dead yet folks.

Yes it's heavy handed, but have you gone back and watched Soylent Green, ZPG or Silent Running lately? Those movies benefit from the 'slower paced' filmmaking as dictated by the filmmaking of their decade, but they are just as earnest and 'shrill' if you want to see the that.