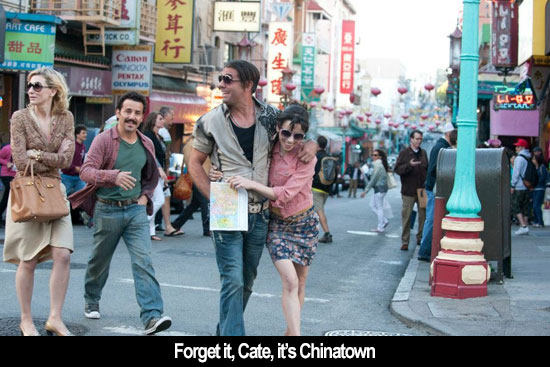 by Angelo Muredda Woody Allen's forty-third directorial effort begins with a one-sided conversation on a plane that will seem familiar to anyone who's seen any of the previous forty-two. Jasmine (Cate Blanchett, on a brief hiatus from her Galadriel duties) spouts anecdote after anecdote to a placidly-smiling elderly woman, cycling from the banal origin of her name to the story of how "Blue Moon"--"You know the song"--was playing when she met her husband. Our poor audience surrogate is held captive by this narcissist, with whom we're fated to spend the rest of the picture, until she meets her husband at the baggage claim and instantly spills about the stranger who "couldn't stop babbling about her life." It's a curious start, not so much for the arch reveal that the women are strangers, via a rack-focus shift at the airport from this interloper to our real protagonist, as for the faintest hint of auto-critique.

Approaching 78, with an output averaging a film per year for the past five decades, Allen is a filmmaker who unabashedly repeats himself, with an equally unabashed penchant for hyper-stylized repartee. So affected is his dialogue--and so theatrical is Blanchett's delivery of it, à la Blanche DuBois, who she played onstage in 2009 and channels again herein--that it takes a moment for us to realize it's Jasmine, not Allen, who is speaking unnaturally, delivering her life's story as though she's in the middle of an acting exam. Blue Jasmine announces itself, then, as something thornier and altogether more interesting than a recitation of Allen's old tropes: namely, a film about the palliative comforts of repetition for old pros who find themselves stuck in deep ruts.

We meet Jasmine in dire straits--at the very least, dire for her. A New York socialite ruined by the constant philandering of her husband Hal (Alec Baldwin) and, a bit less importantly in her mind, the revelation that his empire was founded on dodgy Ponzi schemes for which he's since been convicted, she's sent packing to San Francisco in search of work and more modest lodgings. A hipster dystopia to Jasmine, her new digs are home to estranged sister Ginger (Sally Hawkins), a manic grocery clerk perpetually settling for palooka types like current beau Chili (Bobby Cannavale) and ex-husband Augie (Andrew Dice Clay), who understandably never forgave his in-laws for persuading him to invest his 200-grand lottery win into Hal's sinking business.

Until a couple of tired romantic roundelays--Jasmine takes up with a wealthy widow played by Peter Sarsgaard, while Ginger strays with speaker-installation guru Louis C.K.--turn up in the last act, as they do in most of Allen's weaker comedies, this is an uncharacteristically focused work from the auteur. That's thanks both to Allen the screenwriter's insights into the way hollow people tend to substitute cliché for character, and to Blanchett's magnetic performance. On paper, Jasmine is a monster of the sort Allen condemned in Manhattan's late screed against Michael Murphy's dithering professor, someone who goes easy on herself, seeing past Hal's transgressions as long as they allow her own social identity to remain intact.

Allen has been criticized for his limited register when it comes to class, and here, too, the working characters are all of a particular stock: animalistic bruisers with authentic knowledge of the world. He's on more solid ground with Jasmine, as he typically is with people in transitional classes--creative types like his own character in Hannah and Her Sisters, a freelancer circling around a family steeped in money. There's remarkable subtlety, given how caustic the argument is, to the film's suggestion that Jasmine's madness, her fundamental lack of self, has been bred by the performative burden of being a dilettante housewife in the airless bubble that is high-society New York. By this token, Jasmine is not a garden variety hysteric, reciting empty phrases into the ether in hopes that one of them will unlock something in the listener, but rather a displaced aristocrat. That's never more obvious than when she ensnares Sarsgaard at an upper-crust party that neither she nor Ginger belong at by delivering an impeccable rendition of herself, pre-catastrophe. If only the script matched the setting.

Allen has famously disowned the charitable ending of Hannah and Her Sisters, even going so far as to claim that the punishing denouement of Crimes and Misdemeanors was meant as a corrective. Given his history of writing back to his own films, as well as what he considers the overly generous reception of them, it's tempting to read Blue Jasmine's bleak outlook as a response to the cheerful notes that met Midnight in Paris, a much kinder movie about dreamers locked into cycles of delusional thinking. If there's a difference this time around, it's that Allen seems to have gotten over the moralizing of Crimes, which as a parting gift pointed a long, accusing finger at Martin Landau's well-heeled murderer. Jasmine doesn't get off much easier, and is more or less left in the same babbling state in which we first found her, endlessly reciting her charmed past in hopes that the words might magically reincarnate it. But it's hard not to detect sympathy in the depiction, coming from a filmmaker who's so obsessed with his own perceived blunders.