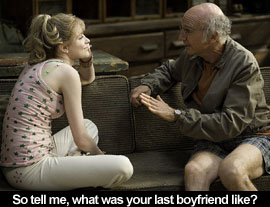 by Ian Pugh Whatever Works, Woody Allen's latest stinker, at least has the advantage of starting a conversation about who Allen is and what he stands for at this stage in the game. Dusting off a decades-old script that apparently underwent very minor revisions, the director makes his first attempt to flummox you by evidently declaring himself too old/inappropriate for the role of an aging, neurotic, egomaniacal ephebophile. There's no longer any currency in saying that Allen makes movies for himself in the most literal sense, and I've always considered the man to be the best purveyor of his own shtick--considering how transparent his writing is to that end, why bother settling for pale imitations? What prevents a total dismissal of his latest proxy is the notion that Allen might actually be right in this instance, as his own stammering delivery lacks the acidic edge required for Boris Yellnikoff (Larry David), a nuclear physicist and self-proclaimed genius with contempt for everything and everyone around him. When the film does work, in fact, it's because David is so quick and sharp with his insults ("simpleton," "inchworm," "moron"). (The part was apparently written with Zero Mostel in mind, and he would have been perfect for it.) But then, everything else about the character harks back to the old standbys that, seemingly, would make Allen ideally cast: the obsession with suicide and death, the rambling nihilist diatribes about man's inhumanity to man, the intoxication with New York culture--all wrapped up in a relentlessly meta package that finds Boris's friends whispering with consternation as he casually breaks the fourth wall to tell us things we already know.

The plot itself is mere window-dressing to serve those ends. Sixty-something Boris offers room and board to twenty-something Melody (Evan Rachel Wood), a runaway naïf from Alabama, and they are eventually married when his arrogant cynicism begins to rub off on her. Melody is pursued to New York by her God-fearing mother (Patricia Clarkson) and father (Ed Begley Jr., doing Jimmy Swaggart), whose culture-shock soon gives way to affection for a city that caters to their hitherto-unexplored desires. Trysts are undertaken and hearts are broken before it ends with the titular pronouncement that you shouldn't second-guess your happiness; Whatever Works feels like the work of a first-year screenwriting student who's watched Allen's late-'70s output but hasn't really understood it.

It's difficult to say that Allen is actively regressing with Whatever Works, though, because this old script would, bearing in mind that Mostel passed away in 1977, inherently exemplify the belief system of a much younger man--young enough, anyway, to be operating without the understanding that great romance stories like Annie Hall and Manhattan wouldn't be effective without their heavy dose of ambiguity. And yet, with its title also being its most outspoken thesis, Whatever Works follows a spate of recent Allen films (Melinda & Melinda, Cassandra's Dream, and Vicky Cristina Barcelona, to name a few) that feel the need to state their intentions with such embarrassing bluntness as to render the effort completely moot. It's an odd creature, a self-devouring Ouroboros of age and experience, and the autobiography of it is unavoidable by the very fact of the man at the helm. Does Boris, in the younger Allen's eyes, somehow represent what Allen did not want to become? Does he, in the older Allen's eyes, represent what Allen became anyway? Contemplating the particulars of its creation is automatically more interesting than the film itself, which, in turn, makes the film itself more interesting--'round and 'round and 'round you go trying to determine where Whatever Works fits within Allen's life, opinions, and catalogue.

At the end of the day, Whatever Works is some seriously repetitive shit; I spent about half my screening bored, waiting for Allen to say something fresh. (A major point about the effect of incidental, accidental relationships between people was told with greater verve in his deeply underrated comedy-thriller Scoop.) Yet somehow, that familiarity is sort of the point. On its deepest level, Whatever Works operates as nothing more than an opportunity to partake in Allen's subconscious, artsy-intellectual gymnastics without a formal invitation. (Of course, that in itself presents a problem, since Allen did a fine job when he formally invited us in with Deconstructing Harry. Was that not enough? 'Round and 'round we go.) It's destined to be picked apart by studious Allenites as something odd and indicative of an artist nearing the final stages of his life and career, ruminating on how he began and how he has or hasn't evolved--but even then, the relentless solipsism gets to be a little overbearing. Too important to ignore, too much of a chore to take seriously... Maybe that's the joke. La-dee-dah, la-dee-dah, la-la. Originally published: July 3, 2009.