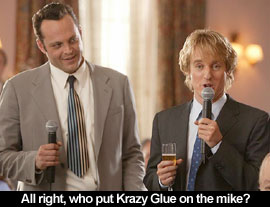 by Walter Chaw It should be over a half-hour before it's over--you can almost mark the exact moment when David Dobkin's Wedding Crashers starts running on fumes. Worse, its jokes are the same jokes that the jovial, fraternal gross-out sex comedy genre has been riding into the ground since Animal House--though the picture does provide a certain breed of rough beast its annual fix of unabashed homophobia, gratuitous body-double skin, arbitrary ass-invasion, lame surprise cameo, and the inevitable forced-sentiment finale. For that, offer a minor hosanna. Like talk radio, besides a couple of laughs against one's better judgment, movies like this offer a communal outlet for aggressions that might otherwise be visited on society at large. (See also Young Republican conventions, Promise Keepers conclaves, Young Life retreats, Klan rallies, and Scientology cloisters.) It's not as bloodily cathartic as Christians and lions, Jai Alai, or live execution, but it'll do.

Divorce mediators John and Jeremy (Owen Wilson and Vince Vaughn) crash weddings to get laid and, over the course of a delirious montage set to Otis Day's version of "Twist and Shout" (a wink at granddaddy Animal House, natch), we get to indulge in their hedonistic glory. There's hope for this film, even if it only lasts about ten minutes--Jeremy, especially, is sketched as an experience glutton, hoarding appetizers and shoving wedding cake into his mouth like my poor immigrant grandmother at the all-you-can-eat buffet. He's such an intriguing character, it's a shame that his role for the rest of the film is as the sacrificial lamb, there to absorb the punishment of the morality police ever-present beneath the surface of so-called "fringe" entertainments like this to keep cineplexes safe for the middlebrow. You can't have your Steve Stiflers without having them eat dog shit, too. Jeremy becomes the wingman tossed on the grenade of true love blossoming between John and Treasury Secretary William "The Next President" Cleary's (Christopher Walken) eldest daughter Claire (Rachel McAdams)--the grenade in question being Cleary's younger daughter Gloria (Isla Fisher, effortlessly walking away with the film), some kind of nymphomaniac psycho who serves, Boomerang-like, as the counterpoint to Jeremy's voracious sexual predator.

But the key word for Wedding Crashers is "waste," as in the potentially excellent McAdams is wasted in the soft-hearted-girl-engaged-to-wrong-guy (Sack (Bradley Cooper)) role and Walken is absolutely squandered in the powerful father role. (For possibly the first time in Walken's career, he's playing a character you could accidentally call a pussy without fear of recrimination.) The entire enterprise is like a Pat Conroy novel that's funny on purpose, the low coming in an appallingly homophobic character, Todd Cleary (Keir O'Donnell, portraying a cross between Alan Cumming and a rat), who one night tries to rape Jeremy. The biggest waste is of the premise, which promises a modern updating of Alfie but instead walks the same road as the Alfie remake, simpering along on gimpy, pre-chewed political correctness that has its antiheroes turn out to be gold-plated eagle scouts just waiting for the right girl to tame their wild horses. There's a dirty-talking granny, a Mrs. Robinson mommy, a public moment at a public place where the hero makes a heroic plea to his briefly-estranged ladylove, and--always unbecoming, if par for the course with a film like this--more sap than a maple grove. Wedding Crashers is black-and-white in its absolute moral reductivism, ultimately tedious and only memorable for the gag or two that work (including a hilariously inappropriate under-table tossing). Inoffensive despite its best attempts at offensiveness, lacklustre despite its best attempts at rowdiness--call it disposable entertainment of the most predictable, boy's-club variety. If you miss it, fear not: there's at least one a year. Originally published: July 15, 2005.