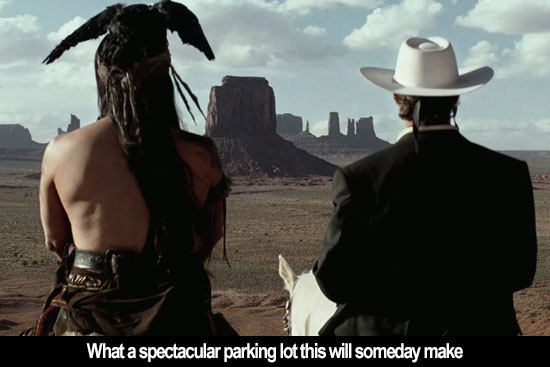 by Walter Chaw What Gore Verbinski's The Lone Ranger has going for it, in addition to a genuinely ugly streak of nihilism and a surprisingly high body count, is that it doesn't seek to "darken" its titular boyscout hero so much as offer that his brand of do-gooderism seems naïve and ineffectual in the modern conversation. It's the same tactic taken by Arthur Penn's own picaresque western Little Big Man, the film it most resembles right down to the framing story: an aged narrator relating his sometimes fanciful tale to a modern chronicler, used to amusing effect when the plot gets out of hand, Princess Bride-style. It's like a lot of movies, I guess (including two Simon Wincer westerns, Quigley Down Under and Lightning Jack), which doesn't mean it's derivative so much as it means that it plays like any number of satires of the kind of innocence that made the Lone Ranger character a favourite of impressionable young Americans for generations. It's more the anachronism of The Brady Bunch Movie than the update of Man of Steel, in other words--and the better for it, even if its ultimate message appears to be that the crimson tide has overtaken us, once and for all, and there's no real room left in the world for the idealism represented by a hero with a list of creeds, the first of which is that to have friends one must first be a friend.

Fledgling District Attorney John Reid (Armie Hammer, playing Brandon Fraser) survives the raucous escape of cannibal serial killer (seriously) Butch Cavendish (William Fichtner) to find himself paired with outcast Cherokee wendigo-hunter Tonto (Johnny Depp), who's hot on Butch's trail. Reid, wearing a mask made from the vest of his dead, heroic, Texas Ranger brother, shoots only to wing and speaks in perfect, feminine-coded grammar; Tonto, dead bird on head, adds another selfish performance to Depp's growing list of such things, though it somehow manages to be less offensive than distracting for how it's always on the verge of being offensive. There's a flaccid love angle with the widow Reid (Ruth Wilson, the very reincarnation of Kimberly Williams's brief career); a weird cameo by Helena Bonham-Carter as a one-legged whore; and a snarling baddie in industrialist Cole (Tom Wilkinson), but never you mind. Smart folks will note that this is Depp doing Gary Farmer from the Depp-starring Dead Man while lamenting that Dead Man is a masterpiece doomed to have grossed a fraction of a fraction of what The Lone Ranger will. They're right, of course, but smart folks should note as well that Tonto's ex-tribe identifies him at one point as "banned apart," which is, also of course, a reference to Jean-Luc Godard's seminal nouvelle vague masterpiece Bande a part. Not only does it reflect the film's desire to be seen as stylized satire, it works, too, as characterization of the hero and sidekick as eternal outsiders. Clever? Sort of, I guess, but points for trying, and at the end of it all, The Lone Ranger is not so bad a companion piece to the better-and-better Rango as initially feared.

In fact, The Lone Ranger, with its slaughter of dozens of innocents, its moments of real grotesquerie (such as the baddie eating a good guy's heart, reflected in the hero's eyeball), is almost as weird as Rango. Consider that the aged Tonto narrator figure is housed in a hall of curiosities at a travelling carnival, just next door to the freak tent. Consider, too, that any tale talking about the connecting of the transcontinental railroad and Manifest Destiny has the inevitable ending of an indigenous people occupying an almost impossible space in our representative wonderland. Depp's Tonto isn't like Hugo Weaving's Fu Manchu baddie from Cloud Atlas--he's much more like Iron Eyes Cody's crying Indian from the Keep America Beautiful campaign. It's complex; suffice it to say it's the stupid White Man who comes off the worse in a picture that is at its heart a withering indictment of industrialism and greed: Note a scene where a roomful of Rich Uncle Pennybagses get Gatling-gunned for no discernible narrative reason. The irony of a bloated blockbuster (in running time and budget, both) commenting on filthy lucre is lost on no one, probably, yet The Lone Ranger comes off as, most ironically of all, something like a labour of love for a character so unbelievably square that he becomes symbolic of our disappointment in ourselves. He's the kind of hero Superman used to be; it makes one wonder if the true incarnation of the Man of Steel on the big screen is one who understands, indeed embraces, his legacy of terminal dullness and builds an atmosphere of loss and regret around him. Anyway, The Lone Ranger is pretty good in a "what the hell is it" sort of way. In this summer season, at least, you take what you can get.

Too forgiving of this film's flaws, although I guess it's a fair trade-off considering that most critics are far too dismissive of its virtues.