*½/****
starring Jeff Bridges, Kim Basinger, Jon Foster, Elle Fanning
screenplay by Tod Williams, based on the novel A Widow for One Year by John Irving
directed by Tod Williams 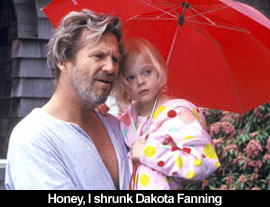 by Walter Chaw Jeff Bridges is so easy that it's criminal. He does things actors shouldn't be able to do, and he does them without breaking a sweat. He's one of our national treasures, because he never draws any attention to himself in the manner of, say, a Sean Penn or a Tom Hanks. It's not showy, what he does--it's acting. And lest you think that it isn't, compare his cocky swagger in Bad Company to his awkward shuffle in Starman to his stung braggadocio in The Fisher King to his archetypal slob in The Big Lebowski to his shell-shocked suburbanite in Fearless. Take each performance by itself and it's comfortable to think that Bridges is just being Bridges; consider them as a whole and it dawns that the man's a genius. Any movie with Bridges in it therefore has something in it to recommend--no less so than his latest, Tod Williams's The Door in the Floor, an adaptation of the first third of John Irving's novel A Widow for One Year.

Named after a creepy children's book authored by Ted Cole (Bridges), the picture is sleazy in that Irving incestuous fashion: highbrow and lowbrow--Cheever doing beaver. That doesn't mean it's good, nor does it mean that it's titillating. But it does mean that it's pretentious. All of the Irving landmarks are here: the author protagonist; the narrative interludes; the tawdry affairs; the precocious children; the New England setting; and the dense dialogue. All of the Irving adaptation landmarks are here, too: the piano score; the pretty people in pressed khakis; the burnished amber glow; the high-gloss tedium; and the low-rent melodrama. If you've seen one Cider House Rules, you've seen all the Hotel New Hampshires you'll ever need to see.

Ted is separating from wife Marion (Kim Basinger) and hires writing intern Eddie (Jon Foster, channelling Dennis Christopher) from the college to essentially be his chauffeur for the summer. It appears that Eddie is the spitting image of one of Ted's and Marion's dead sons and so, naturally, Marion can't wait to shtup him at first opportunity. Basinger is good mainly when she plays some sort of sexual victim (L.A. Confidential, 9½ Weeks)--in other words, she's pretty good in The Door in the Floor, for whatever that's worth. Ted and Marion have a young daughter, Ruth (another Fanning, this one called Elle), who tells her father that he has a weird penis and has, herself, a weird fixation on her two dead brothers, neither of whom she's ever met.

It's complicated in a Prince of Tides sort of way, meaning that it's nothing Dr. Phil couldn't solve with a good down-home, pop-psych dressing down. Flashbacks show the depth of their milk-fed suburban blues, a humiliating interlude with lonely nude housewife Evelyn (Mimi Rogers) provides some arch giggles, and Bridges, between this and Seabiscuit, proves that good artists need good agents, too. The Door in the Floor is a tawdry Hallmark special about the kind of spoiled eccentrics who build squash courts in their barns--it's the Hollywood version of the hardly-better The Mother, and it's so intensely interested in its own navel that, like the too-curious hero of Ted's fairy tale, it's been swallowed up whole. Originally published: July 14, 2004.