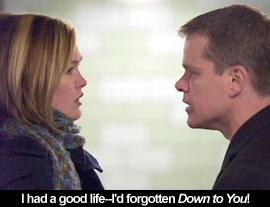 by Walter Chaw The Bourne Identity was directed by Doug Liman, an unusually gifted indie punk blessed with a screenplay by Tony Gilroy that touched on a lot of the same existential hallmarks as Blade Runner. Stripped of embellishment, The Bourne Identity is almost a textbook on movement and gesture, as purely cinematic an action film as any to come down the pike since the heyday of the '70s British gangster genre. The Bourne Supremacy, taking up the story of a broken assassin two years later, has lost Liman, retained Gilroy, and gained Brit helmer Paul Greengrass, the man behind the brilliant pseudo-documentary Bloody Sunday. The picture's a different beast from its predecessor--more, like Bloody Sunday, like a chronicle of a forgotten catastrophe than a post-modern thriller. And it's delirious and whip-smart.

Matt Damon reprises one of the only roles he's ever played well (and he plays it very well), the cipher with potential Jason Bourne, a rogue CIA hitman who has lost his memory somewhere along the way and reverted to an older code of middle-American morality. The attractiveness of the Bourne character has everything to do with this idea that a being corrupted by the cruellest intentions of our government still has at its heart the kind of value system that may exist now only as a fantasy of decency. We're beyond the paranoia cinema of Alan Pakula and John Frankenheimer, over a decade, at this point, into a cycle of cinema where tough guys repent for their actions, accept that they can never change, and come to grips with the melancholy truth that they can never truly make amends for the crimes of their past. Big Brother in charge has moved from fear to suspicion to regret; The Bourne Supremacy is the perfect film (and a good companion piece to Jonathan Demme's The Manchurian Candidate) for a culture torn between bloodlust and repentance--the abusive spouse both brutal and sorry.

If Damon played Harrison Ford's Deckard character in the first film, in the second he's Rutger Hauer's Roy Batty: a thing of vengeance and fury desperate to recover memories that may not be his, and valuing life above all other things in conflict with his actions and rage. What The Bourne Supremacy misses in Liman's undiluted kineticism it makes up for in a feeling of collapsing aecidia--London bridges falling down, a universe in flux and a constant state of war. Bourne tries to live a peaceful life but is haunted first by the same nightmare, then by his old employers, who believe him to be responsible for a few unconnected events. He's an embarrassment--to say more would be to say too much--and he's drawn back into the killing business to defend himself and his girlfriend Marie (Franka Potente) from threats both perceived and real.

The Bourne Supremacy is smart and bracing. It's a spy thriller for adults, and an action movie that banks on viscera rather than hard-drives and software. A chase sequence through the streets of Moscow matches the brilliant chase in the first film and surpasses it in terms of violence and that feeling of weight and speed that's impossible to reproduce through CGI. Moments in which it's revealed that a key character has sold his soul to the proverbial devil (and that he's staying in the Goethe room of the Berlin Westin Grand), or Bourne, fresh from exile, informs his pursuers that he's just coming from Tangiers (the Beats' Interzone), are almost as exhilarating. Something for the heart, something for the head, and the first film in which I've genuinely liked Julia Stiles. Will wonders never cease?