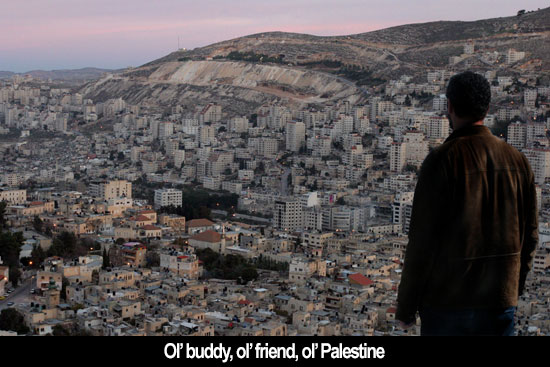 Amin is called to identify his wife's body in a beautifully-executed silent take. He enters the morgue of his own hospital to see half a body, bisected at the waist, under a sheet. It's an image that later gains resonance when a note Siham leaves for her husband speaks to her sorrow that while he wants kids, what she wants is to deserve them. Her corpse is the literalization of an inability or unwillingness to have children; in her death is evocation of his dissatisfaction with her. (In its way, it's as interesting and provocative a sculpture as the "hunger" statue created across the way by the amateur artist in Rear Window.) Amin is taken into custody and grilled by brutal Israeli police captain Moshe (Uri Gavriel) about the extent of his involvement in his wife's plot as Amin's friends and colleagues, so supportive and fond the day before, stand by and say nothing. The brilliance of The Attack is that it really takes neither side: you understand that the Jews would be resentful of and exhausted by the constant terrorist attacks and the uncovering of splinter cells within; you understand that the Arabs would be resentful of being oppressed and brutalized by what they see as an invading force that has annexed their land. Throughout, Amin, searching for signposts, is haunted by conversations he had with his wife--their first encounter, their first fuck (precipitated by a finger-prick, memorialized by a cigarette), the night of his award reception when she wasn't there...

The second half of the picture sends Amin to Palestine to track the last day of his wife's life and confront whomever it was who radicalized her. It's here that The Attack weakens in portraying Amin's wife's family as immanently reasonable and embracing terrorism as the only expression left to a humiliated people. That might be correct--it certainly feels correct--but the message is injured when even the cleric Amin corners for a didactic conversation is the model of restraint and logic. Surely there's room in a movie like this to show not just the fraying around the edges of the Jewish psyche, but something like unreasonable passion in the heart of the Palestinian as well. Maybe I just can't understand. A litany of women martyrs and their possible incept points (one lost a brother to a raid, one lost a family, etc.) does much to humanize them, but what of the children's corpses we saw in the opening, torn apart, studded with glass? The problems with The Attack, in other words, are the same problems presented by Amin (and Suliman is magnificent in his cycling through grief to rage to tremulous uncertainty): that there will likely never come a point at which either side will be able to see things the way the other side sees them. The film demonstrates that no matter the attempts at level representation, there will always be a bias. The Attack works as well as it does because not only is it beautifully composed and shot, it also reduces all the troubles of the world to the mystery of how two people in love, who live their lives together, could, at the end, still be strangers to each other. Maybe somewhere in the acceptance of that, and peace with it, is hope after all.