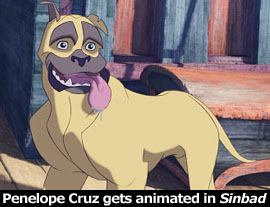 by Walter Chaw Making almost no impression at all, DreamWorks' latest animated flick is a lot like their last animated flick, Spirit: Stallion of the Cimarron: an endlessly-reproducible light romantic cartoon heavy on the derring-do and gender slapstick, and light on anything that could possibly be construed as memorable. The most noteworthy thing about the picture, in fact, is that it exposes the surprising quickness with which DreamWorks' has become that which it most disdains: Disney redux--its sixth animated feature satisfying the maxim of joining what can't be beaten and getting as entrenched and boring as Treasure Planet in the process. As soon as it's declared that the quest of the film is for the "Book of Peace," it's already past time to let the eye-rolling commence.

In a remarkable simulacrum of the bombastic emptiness of a live-action F/X extravaganza, Sinbad: Legend of the Seven Seas (hereafter Sinbad) follows the adventures of the titular sailor (voiced by Brad Pitt) as he rapes and pillages in a light-PG sort of way (rivalling Showtime soft-porn in the quantity of drawn swords and frustrated penetration) before meeting his match in an old friend, Proteus (Joseph Fiennes), and the old friend's betrothed, Marina (Catherine Zeta-Jones). A hero in the Han Solo scoundrel mode, Sinbad's honour is challenged when goddess of chaos Eris (Michelle Pfeiffer)--essentially the distaff version of the Disney Hercules' Hades in design and detail--steals the ever-loving book and secrets herself away in Tartarus, represented here as a protean desert hidden inside a giant glowing vagina. The film is therefore sort of interesting after all, if doubtless a little disturbing for vulnerable tots, who won't know why they're suddenly having Jungian dreams.

A few sequences are visually arresting: a bit about sirens that would royally rile Edith Hamilton while working nicely on its own merits; a snow rescue that is exactly like the snow rescue from Willow; and an opening battle with a sea monster that sort of impresses with the cruelty shown the beast by a jocular Sinbad. Still, the fireworks don't do much to leaven the lifelessness of long stretches of narrative, the bloodlessness of the picture's battle sequences, and the fecklessness of its ultimate Julia Roberts message of being tempted by the fruit of your best friend's tree. Sinbad has nothing particularly to offer its audience except another over-merchandised, over-hyped product of the cookie-cutter that would be better if it omitted its bush-league banter, its potty humour, and its quest for MacGuffins of unusual size--and in favour of a quest for grails that really matter: strong characterization, sharp plotting, and maybe, just maybe, a spark. Originally published: July 2, 2003.