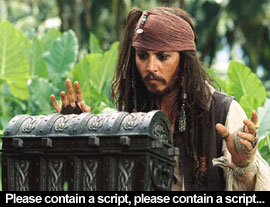 by Walter Chaw I've liked almost everything Gore Verbinski's done up to this point--he's treated genre pictures with a degree of sobriety that's refreshing when snarky post-modernism seems the golden mean. But Pirates of the Caribbean: Dead Man's Chest (hereafter Pirates 2, though "Pirates Reloaded" is perhaps the more appropriate paraphrase) carries with it the taint of desperation that comes with impossibly raised expectations and a burgeoning "known" director who--for lack of a better idea--devotes himself to the notion that magnification is the same thing as inspiration. A giant budget and a franchise tag is an effective snuff to that alchemical combination of energy and brilliance that has thus far typified Verbinski's output, and Pirates 2 is exhibit one of just how boring an unimaginably expensive a blockbuster can be when it jettisons character and story in favour of gimmick and state-of-the-art-for-now special effects. The first of two consecutively-shot sequels, the movie has the added difficulty of being entrusted (like Episode II, The Two Towers, and The Matrix Reloaded) with the exposition third of the tripartite narrative arc. Pirates 2 is a middle without a beginning or end that tries to compensate for that deficiency by throwing money at the problem. Yo ho-hum.

Stiff as boards Will (Orlando Bloom) and Elizabeth (Keira Knightley) are due to be nailed together in holy matrimony as the redcoats come calling at the beck of evil bureaucrat Beckett (Tom Hollander), sending the pair off on another swashbuckling adventure on the heels of Captain Jack Sparrow (Johnny Depp) and a few magical trinkets. The heavy this time is half-man/half-delicious Davy Jones (Bill Nighy), a pirate with the face of calamari and the elocution of a Shakespearean ham. Jones captains the Flying Dutchman ghost ship and its crew of similarly mutant minotaurs (the best a hammerhead first mate), as well as controlling the mighty leviathan the Kraken with some doohickey screwed into his deck. Jones has a bone to pick with Jack, Jack wants a key Davy has to a box that, Bloodrayne-like, holds Davy's evil heart, and Stellan Skarsgård appears with barnacles stuck to his face as Will's woebegone father. That makes two martyred fathers; an awkward and unbelievable love triangle between our three principals; two Kraken attacks; two scenes where everyone rolls down a hill in a giant contraption; and two visits to a Creole swamp and voodoo priestess Tia Dalma (Naomie Harris). Thankfully, there's only one visit to booga-booga Cannibal Island, where all the racial outrage misdirected at Peter Jackson's self-knowing King Kong can finally find a deserving target.

Ditto the trepidation accompanying the first film: that it is of all things an adaptation of a mouldering theme park attraction, so how good could it be? Pirates 2 is gruesome to no good end and dead in the water where the first showed a spark of playfulness and invention. Maybe the only difference is that Depp's trick performances now strike me as sort of selfish and arrogant (he's the weakest part of Tim Burton's Charlie and the Chocolate Factory) instead of inspired as they used to. Even at that, Depp isn't in nearly enough of the movie to counteract the feeble pacing and flat scripting, which, in one interminable scene, lets an embarrassing drivel of doublespeak drool on forever without one laugh and, worse, without advancing the action of the film in any significant way. Everything stops, often and completely, in order for you to, along with the rest of the cast (including Depp), gape at the special effects--it's a mighty thing to ask that such a giant contraption stop itself and then lumber back to life every few scenes. The chief insult is that you feel each of these 150 minutes, giving you plenty of time to consider that this is the first time Depp and Verbinski have consented to film a sequel and that the only shiver the picture offers your timbers is that next summer they'll do it all over again. Originally published: July 7, 2006.