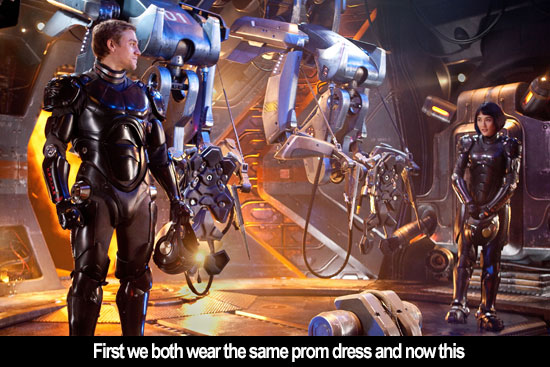 by Walter Chaw I have this theory that the reason the United States started remaking Japanese movies (particularly the J-Horror stuff) almost immediately post-9/11 is that it was after that pivotal event that the country assumed a distinctly Japanese worldview. Suddenly, it was possible for something unthinkable to happen to civilians; the universe was callous and arbitrary in its measuring out of lives, and the idea of a "civilian target" or, more to the point, of "innocence," was hopelessly quaint. It's as good an explanation as any as to why there are so many evil children in Japanese horror--the same explanation, as it happens, for why there were so many evil children in late-'60s/early-'70s American horror--the difference being that there was usually an explanation for why the children were bad in the United States (the Devil, mostly). In Japan? Not so much. In America's post-9/11 evil-kid flicks, even the ones not remaking Japanese films, the kids are generally just born that way. Even the rise of "torture porn" is more or less a not-as-graphic reproduction of Japan's "Guinea Pig" cinema--seven pictures from the '80s (including the indescribable Mermaid in a Manhole and Flower of Flesh & Blood, which caused a credulous Charlie Sheen to call the FBI), culminating now in the United States with a pretty rough update of Maniac starring everybody's favourite probably-murderer, Elijah Wood.

What the United States hasn't done that often is reproduce Japan's kaiju eiga--"giant monster" flicks, a genre launched by its still-most-prominent example (Gojira, naturally). In recent years, maybe Peter Jackson's King Kong and Matt Reeves's Cloverfield were the first tentative shots across that particular bow. Or maybe the appetite for urban-levelling destruction in kaiju eiga has emerged in the United States without the kaiju, melding instead with the threat of terrorism from without and the unseemly lengths to which our own government will go to protect us from within. Destroying metropolises has become the lingua franca of the summer blockbuster season, with or without giant monsters (though there were a few cool-looking armoured kaiju in The Avengers). In one summer that's seen the destruction San Francisco twice (Star Trek Into Darkness, Pacific Rim), Manhattan/Metropolis once (Man of Steel), every-fucking-where thrice with Oblivion, After Earth, and World War Z (although Israel in that one only falls through over-enthusiastic Palestinian ululation--the most subversive element in an otherwise-uncontroversial film), to say nothing of the vivid suicide-bombing in Hollywood in Iron Man 3, only one happened through the agency of giant monsters, though two, arguably three, were through the agency of something extra-terrestrial. Do we read an element of the uncanny in that? The idea that we are, like Reagan, looking forward with dread and anticipation to the day when something other invades, thus unifying all citizens of Earth under one banner? It's either indulging in the fantasy of absolute righteousness that we enjoyed for about 12 hours in the wake of 9/11, or it's a brand of fatalism that suggests it will take something unprecedented now to bring us together before The End.

Whatever it is, here's Guillermo del Toro's unapologetically-gobsmacking Pacific Rim, trafficking in broad melodrama and mecha-vs.-kaiju battles begging to be seen in IMAX. The sound design is fillings-rattling, the special effects are extravagant, and the cast? Yes, of thousands. And yet, the human hero, Raleigh (yup) Becket (Charlie Hunnam), is vanilla, non-descript, difficult to root for despite attempts at lending him depth through the early death of his brother in one of the film's half-dozen ultimately-interchangeable kaiju battles. Likewise his waifu sidekick Mako (Rinko Kikuchi), who, it's revealed, is the adopted daughter of square-jawed marshall Stacker Pentecost (Idris Elba), aching to prove herself in mortal combat against the pan-dimensional beasties. Apparently some mysterious aliens are using the beasties to clear out Earth of its "vermin" so that they might inhabit it themselves. (Shades, now, of Oblivion.) To be fair, Mako has a flashback story in a bombed-out, ash-raining Tokyo that is haunted in a way the rest of Pacific Rim isn't. It, plus a moment where an earthbound kaiju suddenly reveals it has wings, are themselves worth the price of admission.

Because I'm a huge, unapologetic fan of del Toro's work, I expected there to be some pathos and personality in the monsters, but there isn't save one baby monster that's hilariously hungry. I expected there to be some weight in the human relationships--fathers and sons, fathers and adopted daughters--but there isn't. There isn't even all that much tension. There's a training sequence in the middle of the film, for instance, where Raleigh fights Mako to test, I think, their compatibility for a neural "drift" that Vulcan Mind Melds them in the robot for some reason. It's not set up, not paid off, not explained well, period. I think often of when Hellboy kills the Earth Elemental in Hellboy II, of the enormous moral complexity of that sequence, the peril, the sense of ecology, and the feeling of loss once the monster is vanquished--all things seldom felt at the movies since Dragonslayer, perhaps (making apt del Toro's screenwriting collaborations with Dragonslayer helmer Matthew Robbins on Don't Be Afraid of the Dark and the upcoming Crimson Peak), and none of which is especially evident anywhere in Pacific Rim. It all seems very much like an expression of extreme creative frustration: the manic ejaculation that follows years of cinematic cock-blocks and the heartbreak of being literally two days away from starting production on a dream project, At the Mountains of Madness, before Universal decided to invest in Battleship instead. There's real joy, real release, in the film, but it's every inch a visionary filmmaker shaking off the rust by indulging in almost every trope of an established niche genre without adding anything to the conversation. It also feels like a calculated "dumbing down" of an artist's vision and work in the hopes of gaining the collateral to direct the movies he really wants to by convincing investors he can give the audience what it wants without also making it uncomfortable.

Early reviews say that Pacific Rim is a "thinking man's" Transformers movie--strange, almost backhanded praise along the lines of the also-popular "dumb in a good way." It's neither of those things. Rather, it's the worst of Guillermo del Toro's Hollywood output (yes, worse than Mimic)--which is all worse than his Spanish output--and mainly because it's essentially a Japanese movie by a Mexican filmmaker trying to woo an American audience. It's a for-hire project from what has been one of our most unique filmmakers; consider that the primary screenwriter on the piece is not del Toro, but the guy who wrote the remake of Clash of the Titans. The real miracle of Pacific Rim, though, is that it was made at all. The story, of kaiju rising from the deep to battle dual-piloted robots called "jaegers," is ridiculous, of course; the acting is uniformly awful; and the screenplay is likewise a poor hodgepodge of macho double-talk for the alphas and simpering pseudo-science for the techies (Charlie Day and Burn Gorman). It climaxes with a giant battle--well, giant-er battle, no less easy to follow for its scale--complete with noble sacrifices that don't land with much impact and a cutesy-pie denouement I didn't care for when I saw it at the end of The Spy Who Loved Me, Octopussy, and Tomorrow Never Dies, either. And it has a cameo by Ron Perlman that had me hoping with all my hope that they at least spent some of their time on set together working out how to get Hellboy 3 made. The fact of Pacific Rim, in other words, is far more cause for celebration than the execution of it. It's a product designed for overseas success, and should it land, hopefully it'll translate into the misinterpretation that it turned a profit because it was somehow original. Whatever the case, if it wins del Toro the golden ticket to do whatever the hell he wants to from now on, call it a major success.

Godzilla being 'remade' in 1998 does nothing to derail your laughable theory, I notice.