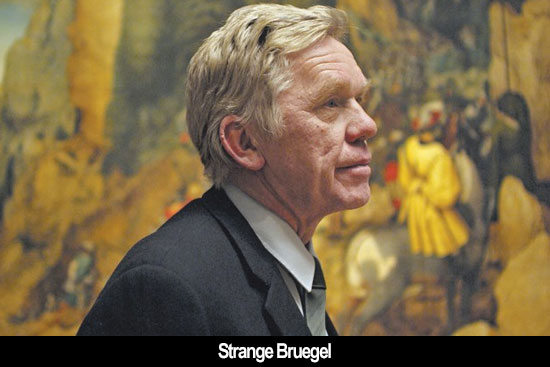 by Angelo Muredda The closing credits of Jem Cohen's warm and wonderful Museum Hours give equal thanks to John Berger and Patti Smith, and it's not hard to see why. Further to being Cohen's friend and occasional collaborator, Smith occupies a rare place at the intersection of art stardom and punk history, while Berger might be the only figurehead total newcomers to art criticism can name, his TV series "Ways of Seeing" having turned innumerable undergraduates onto ideologically-inflected readings of popular images. Whatever their personal contributions to the film may have been, Berger's knack for providing the novice critic with the armature to see intelligently and ethically is as instructive here as Smith's mercurial punk ethos. Museum Hours--which, like Berger's BBC miniseries and book, is destined to have a long afterlife in college art courses--is an absorbing and richly humanist synthesis of those seemingly contradictory impulses, a puckish walking tour through an art gallery that doubles as a manifesto for seeing deeply into the rubbish beyond the walls of the museum.

We're keyed into that fruitful collision between high and low culture from the first scene, a wide shot of Viennese museum guard Johann (Bobby Sommer) calmly seated behind a red rope and dwarfed by an enormous wooden door as the alien microphone feedback and distorted guitars of a soundcheck, presumably from his past life as a concert promoter for punk bands, surround him. You could read these contrary aural and visual cues as an announcement that juxtaposition is going to be Cohen's primary mode. True to the simultaneity of that set-up, the ensuing main narrative line--Johann's burgeoning friendship with Anne, a Montrealer (Canadian singer-songwriter Mary Margaret O'Hara) who's in Austria to visit a dying friend--is always held in tension with Johann's soft-spoken, lilting narration. Putting us in mind of a less worldly, more grounded version of Sans Soleil's fictional traveller Sandor Krasna, his gentle commentary spans the art he guards in the Kunsthistorisches Museum, home to the largest Pieter Bruegel collection in the world, and stray observations about quotidian life in Vienna--the latter paired with Cohen's beautiful 16mm documentary footage of the city, where the former is digital.

Much of Johann's voiceover concerns the pleasures of noticing stray details, and Cohen, too, privileges the accidental, from the image of a silhouetted skateboarder bungling a trick under a bridge to a gallery patron's furtive glance towards the camera--another shade of Sans Soleil, this time of its most famous image. In part, this approach is a tribute to Bruegel, who, as an art historian and museum tour guide played by Ela Piplits explains at one point, was interested in tapping the "radical" potential of common life through images of peasant living that bordered on the documentary. Modest as they first scan, Cohen's seemingly tossed-off compositions of abandoned beer cans and pedestrians in hoodies outside the museum are similarly meant to have us dwell on the immanence of mundane things, especially insofar as they're placed, via montage, beside Bruegel's tableaux.

There is something rather moving about this suggestion that the austere institution of the museum is at its best when it simultaneously widens and sharpens our palate for what lies beyond it. Admittedly, though, there is some danger of condescension and appropriation in this elevation of supposedly lesser images. Here, too, Cohen finds a parallel in Bruegel, namely the artist's subterfuge as a peasant in order to better understand the people he painted, something expounded at length by the tour guide to an obstinate listener. That patron is the rare straw man in a film that otherwise has nothing but patience for the amateur--a word that is of course linked, through its Latin etymology, to love.

On this note of amateur appreciation, the highlight of Johann's commentary--and arguably the essence of what Cohen is after--is in an anecdote about one of his former coworkers, a Marxist punk who thought the whole concept of a museum ridiculous and read each painting as a banal stand-in for currency. Dutch still-lifes, Johann recalls his younger charge saying, are the equivalent of a contemporary painting of a Rolex, or an especially indulgent rap video. Johann disagrees, as Cohen surely does on the whole, despite his own background in experimental art and urban landscapes, but the teen is acknowledged, not dismissed, his objections allowed to stand with more or less the same conviction as the tour guide's vague assertions about how the paintings "speak to us" and "tell stories." (Though she's called upon as an authority, her testimony to Bruegel's common genius is expertly deflated in a lovely stray shot of a patron clandestinely checking his phone mid-tour, perhaps a nod to a similar balloon-popping moment in Olivier Assayas's Summer Hours, where a man breaks from the pack in the furniture section of a gallery to invite his friend to a movie.) Johann thinks he's missing out, but will give him this much: "He was a good kid, really, and I'm sorry he moved on." That Museum Hours has much the same bewildered fondness for everyone from Johann and Anne to Bruegel is a testament to its own radical beauty.