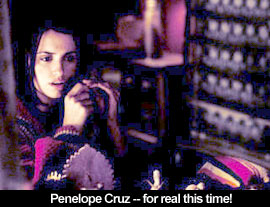 by Walter Chaw The three or four times that Larry Charles's Masked and Anonymous features musical performances by its star Bob Dylan (particularly a rousing rendition of "Dixie"), the picture manages to be something just north of unbearable. The rest of the time, it's an interminable ego trip through Dylan's towering sense of self-importance, his almost total inability to relate with reality, and that curious phenomena of popular artists who are at once imperiously patronizing and desperate to be seen as common men. When failed concert promoter Uncle Sweetheart (John Goodman) asks down-on-his-luck folk singer Jack Fate (Dylan) about the importance of Jimi Hendrix and Janis Joplin to American rock-and-lore, the inanity of the answer (and the evasiveness of Dylan's demeanour--"Well, it matters to someone, I guess") isn't mysterious so much as inane and disingenuous; even the evocation of social phenomena as important and galvanizing to roots rock and the inner city as the myth of Stagger Lee is tossed off with a wry flick of the hand. Pretending that he doesn't know himself to be an icon in American music (and, arguably, even of American letters) is the worst kind of arrogance: the sin of false modesty, which Dylan doesn't wear particularly well and is frightfully unbecoming besides.

"Somewhere in America," Masked and Anonymous tracks the journey of Fate (once again, that disgusting wet noise is an audience of eyes rolling skyward in unison) as he's released from a prison in a civil war-torn United States to perform in a benefit concert for "the people." Uncle Sweetheart's partner in the venture is Tennessee Williams-cum-John Waters cast-off Nina Veronica (Jessica Lange), while super-roadie Bobby Cupid (Luke Wilson) provides a vintage guitar with, like Fate, a tie to the heart of folk anthem and the blues. Fate's dad is the ailing president (Richard Sarafian) or something (and Angela Bassett is the president's concubine or something), and Mickey Rourke plays someone who would like to execute a coup on the night the big show is supposed to be broadcast across the country. An investigative journalist, Tom Friend (Jeff Bridges), hounds Fate for no good reason, Friend's girlfriend is Pagan Lace of course (Penelope Cruz, still looking like the lead hen from Chicken Run), and Friend's boss is Bruce Dern--of course. Val Kilmer appears as a philosopher/animal wrangler, Giovanni Ribisi appears as a pallid rebel gunned down at a bus stop, Ed Harris appears as a ghost in blackface--then there's Chris Penn, Daryl Hannah, Fred Ward, Christian Slater, Cheech Marin, Laura Elena Harring...

Overcrowded and tied by neither narrative nor vision, Masked and Anonymous is masturbatory piffle of the first order--activist without cause and hoping to hit a few hot buttons by swinging wildly at the fences. Clear by now that the script by "Sergei Petrov" and "Rene Fontaine" is actually by Dylan and director Charles, the main defense of the film is that it reads a little like a Dylan song, forgetting that Dylan's songs are, for the most part, poetry of a time and a place rather than rhythmless fictions too in love with their own obscurity. Each Dylan tune, whether performed on film or floating around on the soundtrack, gives lie to the idea that Masked and Anonymous is the cinematic translation of a Dylan song: the man's music is driven by ideas and passion, while the film seems driven mainly by pretension and self-consciousness. Arguably worth it for the handful of Dylan numbers, Masked and Anonymous is so irritating and protracted that it works just like what it most likely is: a vainglorious altar attended by devotees of a musical genius overextending himself, curious not so much for its ambition as its hubris. Originally published: July 25, 2003.