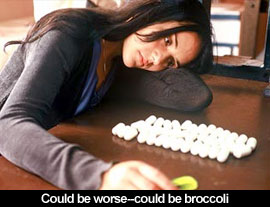 by Walter Chaw In Maria Full of Grace (Maria, llena eres de gracia), Maria (Catalina Sandino Moreno), to prepare for swallowing the horse-choker, heroin-filled prophylactics that Colombian drug mules ingest by the dozens, practices on a few large grapes (call it "Maria full of Grapes"), and in her resolute suffering, she heralds the arrival of an actor to be reckoned with. Overflowing with subplots and burdened by at least one major character who's superfluous and distracting, Joshua Marston's hyphenate debut is as overstuffed as Maria's digestive tract, but Moreno's performance is so sure-footed and clear that it smoothes over some of the rougher patches of the piece.

Maria strips thorns off roses as a worker in Colombia's only other industry, and the ironic analogy to Marston's undecorated film is obvious. Maria Full of Grace is almost just thorns, blunted only slightly by Marston's unusual fairness towards the working poor of Colombia, who turn to the drug trade to make a living. Maria and her best friend Blanca (Yenny Paola Vega) quit the flower plant to become human smuggling containers, armed with tickets to New York and a rendezvous with scumbags ready to harvest the drugs upon arrival. The airplane ride, as the girls experience bad cramping and extreme discomfort, is in the middle of an extended sequence as painful and tense as any in any movie this year.

The wonder of Maria Full of Grace is witnessing the evolution of Maria from belligerent child to responsible adult. Completely unaffected and wholly transparent, Moreno's turn is one for the ages. Without her, the picture would tend toward didacticism instead of the nice balance that it strikes between the action and the human motivations that drive people to action. To Marston's credit, he seems to know this and skews his attention to her accordingly--the only times the film falters are when she's not the focus. The Blanca character and a subplot involving the sister of one of Maria's co-mules, Lucy (Guilied Lopez), seem like remnants of a first draft, or evidence that Marston didn't realize what he had with his lead in time. I appreciate the attempt at depth, and Lucy's fate does provide the impetus for the third act, but during all the moments that Maria has to share the screen with someone else, I found myself wondering what she was doing. Like the similar Acts of Worship, Maria Full of Grace is a one-woman show--it lives and dies by Moreno. It's tempting to compare Maria to François Truffaut's Antoine Doinel character--and Moreno's performance to Jean-Pierre Léaud's; only time will tell if the comparison holds. Originally published: July 16, 2004.