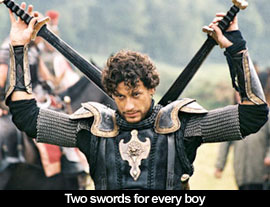 by Walter Chaw King Arthur wants to have it both ways. It wants to be smart and it wants to be stupid, too. It wants to appeal to eggheads, so it opens with a title card that promises what follows is based on "new" archaeological evidence; then, for the alleged delight of the peanut gallery, it trots out the same period epic dog-and-pony show to which we've been repeatedly subjected since Zulu Dawn. Strangely enough, this new archaeological evidence apparently dates feminism back to the fifth century (witness the dominatrix version of Guinevere, decked out at one point like Grace Jones), in addition to facilitating a clumsy political satire of twenty-first century America's religiosity, arrogance, and imperialism. Needless to say, when something tries to please everyone, everyone is seldom pleased; King Arthur is both stupid and boring, and the revelation that, stripped of tragedy, controversy, and resonance, Arthurian legend is as banal as and similar to Tears of the Sun (director Antoine Fuqua's previous film) displeases indeed.

Arthur (Clive Owen) is the Roman leader of a small band of Samartian knights conscripted into the Roman army for hazardous duty along Hadrian's Wall, the border separating what passes for civilization in England about two centuries ago from the evil marauding Saxons, led by glowering Viking Cedric (Stellan Skarsgård). With grudging nods now and again to familiar elements of the Arthur myth--the sword is called Excalibur, there's a character named Merlin, the table is round--what emerges is a dour, fatally inconsequential story of brotherhood under fire, stock war-movie characterizations, and the sense that Fuqua isn't so much a social provocateur (as his Training Day and Bait might suggest) as just another mainstream shoehorn. In the course of escorting a venal Roman governor through enemy territory (and may I say that you'd probably be better off referring to my review of Tears of the Sun, making sure to carefully draw a line through every single mention of black folks), Arthur and his band of merry men rescue woad-begone archer Guinevere (Keira Knightley), whose captivity and near-death was, according to the filmmakers, a cunning ruse to enlist Arthur in a Briton plan to scour England free of the Saxon menace.

There were two problems confronting Fuqua: how does one rip off Braveheart and come out the other side with a PG-13 rating, and, harder, how does one give the Arthur legend a happy ending? The first is solved with confused quick-editing and the sort of cynicism that allows all manner of depravity free reign so long as none of it is explicitly depicted, while the second is solved through the elimination of Guinevere's love triangle with Arthur and Lancelot (Ioan Gruffudd), the murky, sordid details behind Arthur's parentage, and the sense of impending doom as Camelot (not here, either) collapses in on itself from ennui and corpulence. Were King Arthur not tied to one of the more popular mythologies in Western culture, it'd still be a monumental bore that alternates lovely landscape shots with CGI battle simulations, which have begun to feel like a hammer after the overkill of such like-minded behemoths as Troy and The Return of the King.

For all its problems, King Arthur's greatest crime is that there's nothing at all at stake at any moment. Sans a rooting interest, tension is also missing, prohibiting our investment in the resolution of any individual storyline. The fate of Bors (Ray Winstone in the Tom Sizemore role) and his string of bastards is as weighty as both Cedric's Oedipal struggle with his son Cynric (Til Schweiger) and Arthur's droop-jawed wooing of Guinevere. Watching things unfold at their tortoise pace inspires a certain trapped resignation. King Arthur exists in a purgatory between historical accuracy and ravishing Romanticist mythmaking, a world without reward (or end). It's an occasionally picaresque picture that has as its main selling point a beautiful young starlet with about twenty minutes of screentime and the promise of an absence of myth and magic. Proposed as an antidote to Harry Potter and the Prisoner of Azkaban and Spider-Man 2, I think I'd rather be sick. Originally published: July 7, 2004.