ZERO STARS/****
starring Mandy Moore, Allison Janney, Alexandra Holden, Peter Gallagher
screenplay by Neena Beber, based on the novels Someone Like You and That Summer by Sarah Dessen
directed by Clare Kilner 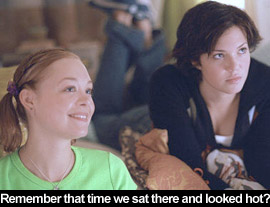 by Walter Chaw Based on a pair of Sarah Dessen novels that apparently deal with the tribulations of a particularly sour adolescent girl, Clare Kilner's How to Deal is a disastrously twee Judy Blume knock-off that compacts every ill of growing up female into a hysterical parcel of over-reaching and hollow sanctimony. It's the kind of movie that has its maudlin protagonist reading Madame Bovary to parse, I guess, some portion of romantic martyrdom when the irony of the reference is that at the root of Emma Bovary's problems arguably lies her infatuation with mealy romance novels into which she might substitute herself for the heroines (not forgetting the role of Dessen's books in the first place). Irony and incompetence being the two rules of the day as Kilner and her cinematographer Eric Alan Edwards (once Gus Van Sant's DP, now relegated to stuff like this and Britney Spears's Crossroads) make unforgivable decisions in lighting and camera placement that cast How to Deal as an unintentional horror film with at least three scenes loaded with tension and free-floating anxiety for no good reason save that the filmmakers don't seem to know what the hell they're doing.

Halley (Mandy Moore) is the abovementioned sourpuss teen who's best pals with poor, doomed Scarlett (Alexandra Holden), her role in message-laden messes like this to provide the cautionary example so that the undeserving protagonist can avoid actually committing any mistakes of her own. To that end, Scarlett engages in premarital sex and, like any good slasher movie, is promptly punished for it with the tragedy of teen pregnancy and the ridiculous death of her angelic boyfriend. To leaven the staleness of the piece, a pot-smoking, straight-talking granny (Nina Foch, professional geriatric comedy relief) makes a mess of a dinner with the future in-laws of Halley's sister (Mary Catherine Garrison)--a dinner already a mess for the inexplicable appearance of a neo-Hattie McDaniel archetype housemaid/nanny. Meanwhile, Halley's mother (Allison Janney), recently divorced from a soon-to-be remarried radio DJ (Peter Gallagher, looking more and more like that boomerang fish-throwing Muppet), starts up a romance with a kindly Civil War re-enactor (Dylan Baker, who cannot appear in suburban operas anymore without dredging up the ghost of Happiness) while Halley herself finds love sort-of with dreamy rebel Macon (Trent Ford, vying with Paul Walker for the coveted "Worst Performance of the Year" award).

As Macon delivers a eulogy to Dead Boyfriend dressed like Johnny Depp in Benny & Joon, I felt, in a simultaneous rush, the twin sisters of dread and fatigue. Small implosions of mirth at a running theme of Halley and Macon repeatedly using the "Jedi Mind Trick" on one another (remembering, according to Lucas-lore, that said trick only works on the feeble-minded) aside, How to Deal is so manipulative and frustratingly amateurish that the only appropriate description of the experience of watching it is "wearying." Consider a scene in which Janney's frazzled divorcee chops carrots that is shot and edited in such a way that rather than comic (as appears the intent), the scene plays a lot like the typewriter sequence from The Shining; or another where a character flies off in a helicopter that, given the slipshod mordancy of the picture to that point, leads to anticipation of a fiery crash; or a scene where Halley dances at the edge of a dam run-off that suggests a sudden plunge to a watery grave; or still others where a character is shot completely in shadow, or divided by a mirror--none of which trumps an establishing shot of Halley's high school that shows its flag, again without explanation, flying at half mast. How to Deal even offers intentional horrors like a pointed car wreck and dialogue that includes such lead balloons as, "It was great...if you happen to be the devil and enjoy human pain." Which is also as pithy a critique of the film as any.

Essentially the Britney Spears Crossroads (the only substantive difference between the two unforgivable suck-a-paloozas that Mandy is too chaste to pull the trigger on the premarital-sex-with-scumbag pistol), the picture is a ninety-minute billboard for Krispy Kreme that searches for a little credibility amongst the post-babysitter's club demographic by tossing off some foul language and presenting a few scenarios that are relevant to teenage girls mainly because How to Deal tries to cover every issue that might be relevant to teenage girls. It uses ancillary characters to suffer in place of our hero, making her evolution less one of experience than of the sort of parasitic voyeurism favoured by champions of the spectator-chic of Forrest Gump, and it's so intent on offering every single element of the teen formula (the wedding, the birth, the musical falling-in-love montage) that it's at once overcrowded and curiously empty. How to Deal is not only badly plotted, performed, and thought-out, it's an example of what can happen when filmmakers don't have the first idea about the language of film. Trying to communicate in a tongue you don't understand, after all, tends to result in awkward misunderstandings, clumsy misstatements, and hours of frustration and muddle. Originally published: July 18, 2003.