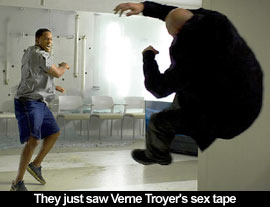 by Walter Chaw I'm an unabashed Peter Berg fan. I think that his Very Bad Things is naughty and transgressive in ways that Judd Apatow could only pretend; that his The Rundown is the first film since Herzog's Even Dwarfs Started Small to use little people correctly in a rollicking, rousing sentence; and that his Friday Night Lights did a very fine job of essaying the insular madness of Texas high-school football. Berg's last picture, The Kingdom, is the finest pop explication of the brief history of (and our relationship with) the kingdom of Saudi Arabia, and now his superhero epic Hancock has the temerity to try to address the colour barrier in comics as it relates, uneasily, to these United States. Talking about it tells everything so beware the major spoiler, but Hancock has at its centre an indestructible, airborne, super-strong black man with a white wife who, should he spend too much time near her, renders him completely, utterly mortal and thus subject to the world that would see them apart. Consider that this is a mega-budget, 4th of July blockbuster starring Will Smith, the black guy all America can agree on, doing the old miscegenation tango with the whitest white girl on the planet, South African lovely Charlize Theron, which should have aged white Republicans twisted up in their Confederate-flag panties. We're only really forty years removed from Selma, Alabama, and here's forty-year-old Will Smith planting a big wet one on Theron's lips in a tentpole flick the summer that Barack Obama became the first black man chosen as the Democratic nominee for the President of the United States. God bless America, free(r) at last.

Hancock (Smith) isn't a brother from another planet, but he is something of an asshole--a fact of which he's reminded constantly throughout the first half of the picture, usually to disastrous effect for the speaker. Yet he seems to desire to do the right thing, inspiring Pollyannaish PR guy Ray (Jason Bateman) to champion Hancock's image reconstruction. Hancock, foul-mouthed, ghetto-attired, drunk, flying around breaking things up real good, is a magnification of white fear while dancing along this Iron Man line of perceiving himself as mainly just misunderstood. Ray entreats him at one point to stop pretending he doesn't care about this misunderstanding, offering Hancock what amounts to be a kind a social justice and equalization of radical perception. He does this by coaching Hancock to dole out praise and tone down the sass--to dress like "Thriller"-era Michael Jackson and take his racial medicine by going to prison to rehabilitate his reputation. The press conference preceding Hancock's incarceration is like testimony canned from the Balco trial: the way that we as a culture deify the black athlete by pretending that his likely-underprivileged upbringing and oft-neglected formal education is exorcised with fans and money is skewered with cruel precision. Hancock also reminds in more than one instance of Louis Leterrier's Unleashed in its handling of the barbed wire expanse of racism--how it informs and defeats self-worth and identity in the formulated individual member of a minority--and it casts Will freakin' Smith to poke it along with his gold-plated toe. It's interesting to me that the first major set-piece of the film sees Hancock defacing the Capitol Records building in LaLa Land, precisely because it occurs right smack dab in the middle of this Sony-produced extravaganza. Hancock isn't an exploitation film, it's about exploitation as it applies to blacks and the entertainment industry.

I like that he's named after John Hancock, discovered with his skull caved-in in a Miami hospital only to be completely healed, sans memory but newly Incredible, after a night's stay. Drinking himself into an oblivion eternally out of reach, he consequently surrenders to an immortal, miserable half-life, fighting crime in the worst possible way, a ticket stub to Frankenstein the only clue to his prior existence. Ray's wife, Mary (Theron), has the answer, and it's got something to do with Plato's Symposium idea that all humans originated fused, were split, and spend the rest of their lives seeking reunion. Romantic? At least. The caveat of course is that reunion for beings like Hancock means mortality--which means that if one of the halves is black and the other blonde, there will always be an element interested in separating them again in the most violent way possible. But there's the suggestion, too, that Hancock's blackness is compromised by his association with a white woman--that that which makes him distinct and offers him identity is made rickety and subject to attack by his object choice. Does this suggest that Hancock is anti-miscegenation when it celebrates the familial bond between Ray and Mary (and their sickly white son) while seeing Hancock and Mary's union as dangerous and fatal? On the contrary, Hancock works as a fascinating commentary on intolerance in every context, with the sting of the final, bittersweet separation (and def comic epilogue) found in the fact that Hancock macking a white lady would actually be acceptable in this day and age now that he's a superstar (see: Tiger Woods). If nothing else, Berg is emerging as a savant of masculine ritual; colour me pink to tag him with that irritating auteur label. Originally published: July 2, 2008.