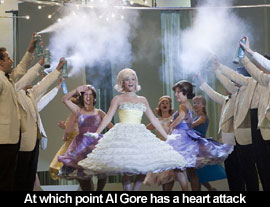 by Walter Chaw It's pretty easy to take the neo-hipster stance of having been there when Divine ate dog shit and, because of status conferred by said endurance of John Waters at his most insouciantly "fuck you," to denounce the Broadway-ification of his already-mainstream-courting Hairspray--now turned into a movie based on a musical based on the original movie--as "Waters-lite." Except that Waters's satire at its best has always been a gloss on cults of pop (this is a guy who made an iconic cameo on "The Simpsons", for God's sake)--and after Polyester, all of his movies run like book for the plastic-fantastic of the Great White Way anyway. Artificiality is actually the point, affectedness another; like Italian, the only way to speak the language is to exaggerate past the point of embarrassment. Still, the key to Waters is the requirement that by assembling a collection of misfits to play his assembly of misfits, not a one of them takes to their duty ironically. Waters is the same kind of archivist as Quentin Tarantino in that way: the casting can be interpreted as a post-modern joke, but the performances need to be true to the essential nostalgia driving the casting. John Travolta in Pulp Fiction, in other words, needed very much to play it as straight as John Travolta is capable of playing it.

Irony indeed that almost everything wrong with Adam Shankman's Hairspray is encapsulated by John Travolta's discomfort in drag. He never looks like anything but Travolta in a Travolta suit, mincing around in a burlesque of femininity that's offensive for its broadness. This is a caricature of an overweight woman with self-esteem issues--how much better could it have been had Travolta, he of the fluctuating flab, channelled some of his own body struggles into the role? His Edna Turnblad is the mother of "pleasantly plump" heroine Tracy (Nikki Blonsky), who, as a small-town Baltimore girl, wishes only to be a dancer on local "American Bandstand" knock-off "The Corny Collins Show". Where the 1988 film was based lovingly/scathingly on the Baltimore of Waters's exiled youth, this redux confuses itself with its gender politics but scores a few well-placed salvos in the race question. The centre of the picture, after Tracy proves herself an able hoofer, is her resolve to integrate the Aryan show and, by extension, all of television; the centrepiece, still-shocking, is the miscegenation of Penny (Amanda Bynes) and Seaweed (Elijah Kelley). Even without Waters as a psychologist trying to hypnotize the jungle fever out of Penny, the sight of teen-queen Bynes kissing a black kid in a mainstream American production is shocking for two reasons: because we never see it; and because we never see it.

A good barometer of our tolerances, Hairspray doesn't, alas, show us Travolta kissing Christopher Walken (as Edna's husband, Wilbur), not even at the end of their deadly song and dance, where it would've made a lot of sense. Hairspray is willing to present the spectacle of black and white but not man-on-man--peculiar, no question, but playing into the read that the film in its gloss and ease-of-consumption is Waters's biggest middle finger to the middlebrow. That rush to pat ourselves on the back for the happy-go-lucky portrait of racial integration presented by the film should be the sharpest indictment of how far we remain from feeling comfortable with actual racial integration. That a hit Broadway musical (and now a hit film) could be about a white girl kissing a black guy says volumes about how far we haven't come from Waters's Baltimore. Ditto its attack on body-image politics (embodied by Michelle Pfeiffer in a Cruella De Vil-as-Nazi performance) and its (gasp) casting of a chubby girl in the romantic lead. The greatest triumph of John Waters and this Hairspray is that his dream of mainstream acceptance has finally arrived and with only a very minor watering-down of his sensibilities circa 1988. Among them, only Travolta's casting rings as a potentially fatal equivocation, yet even that comes with the bracing thought that Travolta, protested for his presence here as a member of "homophobic" Scientology (although Hubbard appears to have recanted his earlier views on homosexuality as early as 1967), is somehow cast satirically.

This Hairspray is usefully artificial. Its candy-coated, MGM musical sheen as Tracy sings an ode to rats and flashers before rapturously riding a garbage truck to the school where she's ritualistically tortured by the beautiful ruling class is perfectly modulated to Waters's merciless mocking of surface pretension and the cult of cool. Cry-Baby has better music than either Hairspray while achieving the same goals, of course, but nobody went to see it, making its usefulness as satire suspect. Up until this point, Waters has been an object of camp appreciation, but Hairspray presents a philosophically thorny conundrum in that it's the first "Waters" picture to not play exclusively to the choir. I wonder about the reaction of teenyboppers besotted by the picture and hope those inspired to check out the man's filmography will start with Pink Flamingos, which is, after all, less shocking and offensive than director (really just choreographer) Shankman's last three films, Bringing Down the House, Cheaper by the Dozen 2, and The Pacifier. Hairspray is sensitive enough to the race question that it almost, almost, inspires a revision of Shankman's oeuvre as somehow satirical--though I'm inclined to think that his pairing with Waters's material, second-generation as it is, is another one of those brilliant Warholian accidents that make the new Hairspray a minor surprise, and a pleasant one at that. Originally published: July 20, 2007.