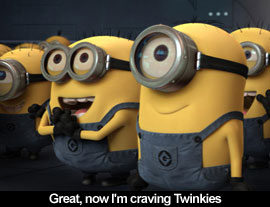 by Ian Pugh It only takes a cursory glance at its cast of characters and the people embodying them to see the kind of trendy thinking that sank Despicable Me. The movie presents us with the headmistress of an orphanage clearly modeled after Edie McClurg--but rather than hire McClurg herself to voice the role, they got the Kristen Wiig, who hits her one, monotonous note over and over again. The antagonist proper is a bespectacled, bowl-cut pervert in an orange jumpsuit--but rather than have Eddie Deezen play him in full-blown Mandark mode, they got Jason Segel to shout a couple of dick jokes to the rafters. Finally, in the centre ring is Steve Carell, performing with a bizarre accent lodged somewhere between Boris Badenov and Ivan Drago. While Carell does an admirable job for what he's given, he's a little too dry to be a successful voice actor--you can't help but think that someone like Billy West or Tom Kenny would have done something truly great with the role.

Despicable Me suggests a "Dr. Horrible" for half-pints--first and foremost in that it isn't half as clever as it thinks it is. Start with a few moldy jokes about how a supervillain finances his schemes. Professional baddie Gru (Carell) needs a loan from the Bank of Evil ("Formerly Lehman Brothers"--ha ha, topical) in order to complete his masterpiece: holding the moon for ransom. When arch-competitor Vector (Segel) steals the shrink-ray he needs to secure the money, however, Gru adopts a trio of orphans--Old-Enough-to-be-Cynical (Miranda Cosgrove), Tough Middle Child (Dana Gaier), and Too-Young-to-Know-Better (Elsie Fisher)--to weasel his way into his nemesis's lair and steal it back. No points for guessing that a few tender moments in child-rearing later, Gru undergoes a Grinch-like transformation and comes to embrace fatherhood.

Scatological humour and Cabbage Patch cuteness aside, the makers of Despicable Me obviously have something they want to get off their chests. Gru's plan to steal the moon stems from a childhood desire to impress his mother (Julie Andrews, in a somewhat perfunctory cameo), and, eventually, he is forced to choose between his dreams and his kids. It reads like a minor treatise on how you can't truly understand your parents until you have children of your own, but when you get right down to it, any ideas this movie might have are at the mercy of a joke that is, alas, far from fresh: It's not that Gru's mother pushed him towards crime--it's that he has a mother in the first place. Like "Dr. Horrible" before it, Despicable Me sees its central conceit as self-sustainingly comical. A supervillain who was once a child? A supervillain who becomes a parent/love interest/workaday schmo? A supervillain who uses the word "chillax"? How preposterous! I'm convinced that a great comedy--a great children's comedy, even--could be made from the daily trials of a comic-book bad guy, but only if those involved were willing to accept that inverting character clichés is not funny in and of itself.

Of course, Despicable Me knows that its noisy action sequences and sad attempts at wit cannot sustain a full-length feature for kids. That's why it affords so much screen time to Gru's "Minions," an army of one- and two-eyed yellow gnomes that have figured heavily in the movie's marketing campaign. The Minions are cute, diverting, and ready-made for spin-off ventures, and their antics are the primary justification for the 3-D surcharge. Make no mistake: this is children's cinema at its most crassly commercial. (A surprise and a disappointment, especially considering it was scripted by the dudes who wrote the wonderfully bizarre Horton Hears a Who!.) And yet, there remains a lingering feeling that it could have accomplished greater things. A more appropriate cast and a sharper screenplay seem like they were within reach; I have to mourn that squandered potential. Originally published: July 9, 2010.