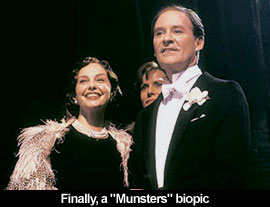 by Walter Chaw Tempting to fall back on clever insults ("de-readful" or "de-reary") when summarizing genuinely bad director Irwin Winker's De-Lovely, a musical biography about the life and times of Cole Porter that's de-adening in its execution. The picture's framework sees old Cole Porter (Kevin Kline)--looking a lot like Carl Reiner--sitting in an empty theatre with some sort of angel of death (Jonathan Pryce) as the events of Porter's life unfold like a Broadway musical before them. The film will be interrupted periodically by old Porter screaming at young Porter (still Kline) that he's an idiot or that No, no, no, it didn't happen that way, just to be reminded by Death that nobody can hear him. It's as stupid as it sounds.

That the structure of it bears a strong resemblance to (which is to say that it's a rip-off of) All That Jazz just goes to show that imitating the moves doesn't make you a dancer. A million typewriting monkeys can produce the works of Shakespeare, but they'll never understand it. So Winkler and fellow monkey, screenwriter Jay Cocks (Gangs of New York, The Age of Innocence), have pounded out the steps to Bob Fosse's brilliant autobiographical picture, but they left out the jazz--De-Lovely is All That Nothing. Though it's possible that it's just more visually interesting to tell the story of a genius choreographer than that of a genius songwriter, I suspect that the combination of Winkler and Cocks (two fellows who, no matter what you think of them, you have to agree have no sense of brevity) is simply toxic.

Young Porter meets gay divorcée Linda Lee Thomas (Ashley Judd) in gay Pah-ree, and the two fall in love and get married. The irony being of course that Porter is, himself, gay--his dalliances with other men never a problem with Linda until Porter becomes indiscreet. There's nothing more to it than that according to De-Lovely: Porter is a rapscallion, Linda is a long-suffering dimwit. (If nothing else, the picture nails the casting.) Sitting through another Ashley Judd biopic after the stunted Frida (what is De-Lovely but Frida with more music and less Alfred Molina?) is a little like torture. Judd sits stock-still through most scenes with her eyes crinkled in a simulacrum of tolerance and her chin upraised in an imitation of class. Credit her this: when she's not outmatched in bad movies like this, she's getting the living tar kicked out of her in much more popular bad movies like Kiss the Girls and High Crimes. Give the audience what it wants--an instinct of which Cole Porter would approve.

So De-Lovely is no All That Jazz--no Frida, even. And as queer cinema goes, it's no Gods and Monsters, despite a late-movie addition of a handsome young ward for a crippled Porter, whose legs have been crushed in a riding accident (the key benefit of which, cinematically-speaking, is a hilarious scene where Judd stifles wet sobs while Kline screams, "I can't work the pedals!"). The camp benefit of De-Lovely is the only benefit to be derived from the ordeal, a sensibility inflated by appearances from Alanis Morissette, Robbie Williams, Sheryl Crow, Mick Hucknall, and Elvis Costello in which they croon Porter's tunes to varying degrees of butchery in various allegedly vivant still-life tableaux. When Natalie Cole opens her mouth and "Every Time We Say Goodbye" drops out, chewed in that curious way (Natalie) Cole chews everything so that it's exactly the same wad of wet goo, the tears start leaking--for all the wrong reasons, of course.

De-Lovely is another show opening, another showstopper, and another moment of Linda expressing disappointed in Porter. Over and over and over again, the same short story told in the same way, the only variable the weight of the pancake fright make-up used to age Kline (no spring chicken) and Judd (about a bucket of chicken away from sister Wynonna). When Linda develops lung cancer and Judd starts acting all tubercular like a bad parody of Dennis Quaid from Wyatt Earp, the promise that the sweet embrace of death will free all of us from this is undercut by Winkler's/Cocks's propensity to pad. Porter deserves better than this. We all do. Originally published: July 16, 2004.