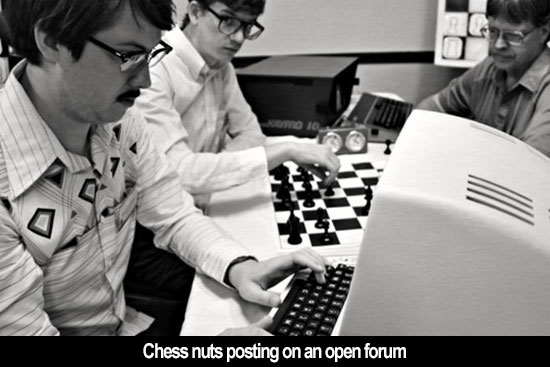 by Walter Chaw Sneakily, the best science-fiction film of the summer is Andrew "Godfather of Mumblecore" Bujalski's decidedly lo-fi Computer Chess, shot with a late-'60s, made-for-home-video Sony AVC-3260 analog tube video camera that approximates the very look and feel of something you'd find in a box in someone's garage. It endeavours to tell the story of a weekend tech convention where proto-hackers engage in mortal combat over who will be the first to create a computer chess program that can defeat a human master (Gerald Peary (!)) and, incidentally, collect a $75k booty. The money, though, is incidental to the glory of scientific discovery, of being the first to push the limits of artificial intelligence to the point of...what? Aggression? Sentience, perhaps? It's telling that Bujalski, at the forefront of a specific DIY subgenre of independent cinema reliant on largely-improvised performances with no budget nor, theoretically, affectation (it's like the American version of the Dogme95 movement), has produced the most affectless, genuine artifact of the dogme philosophy through his greatest feat of affectation: he's created a time capsule of an era in a film about the eternity of the human instinct to create simulacra first and deal with issues of functional equivalence later. In its way, Computer Chess works like a sprung, found-footage diary of the birth of Skynet. It's Mary Shelley, and Blade Runner, and it gets to being about what it's about without being an asshole about it.

On the surface, all Computer Chess is about is a gathering of socially-stunted nerds talking endlessly about programming code and the next/best/latest thing. It's not hard to see Bill Gates at home in here, but it's more recognition of ourselves as members of this first generation of computers small enough to fit in your house, blinding ourselves before the phosphorescent glow of first-gen, consumer-grade home-computing, coding Basic for hours so that a green square jerks three inches across an 8" screen. The conversations are meaningless, too, bravado mixed with jargon in the way of any conversation among men in any pursuit. Bujalski mixes this misfit group with a gathering of new-agers, vying for hotel accommodations in what becomes a symbolic, theoretical space overrun by stray cats. It's like something Rudy Rucker would write--a connection the film itself makes when one of our nerd heroes asks an embryonic electrical intelligence about the nature of infinity. (Rucker's novel White Light concerns aleph numbers and takes place in a literalization of David Hilbert's Grand Hotel.) Computer Chess is essentially about whether or not there are infinities of different sizes, whether it's possible to make a moral distinction at the end between a machine intelligence and a biological one. When it's clarified that the challenge laid before this gathering of geeks is to create an A.I. smart enough to win at chess before 1984, one has to think that the Orwellian demarcation isn't an accident.

What's most interesting isn't that one of the machines seems to respond better to human competition than computer, nor all the HAL-like POV shots that Bujalski and DP Matthias Grunsky give the cathode-ray tube monitors. No, the most interesting thing about Computer Chess is the similarities it draws between the hippies (immersed in some kind of couples therapy) and the computers. Both alien intelligences to our heroes, the hippies represent carnal Id, the computers cold Superego; when timid Bishton (Patrick Riester) is offered a three-way with a particularly amorous couple, his inability to navigate the awkwardness of that situation speaks eloquently to his equal inability to understand why his computer is developing a bias. The suggestion that there's a parallel between human reproductive practices and electronic evolution is super-cool. I also appreciate the idea that we're all just machines at the mercy of our programming, and that those of us most likely to have a tough time at biological reproduction may discover avenues of power and legacy through technological reproduction. Computer Chess is rife with subtexts, advanced with a style of filmmaking that begins as a gimmick only to morph into something usefully disjointed. Once the film stock switches suddenly to jittery, anxious 8mm colour near the end, the form mirrors the function, and the picture (the images were recorded onto hard drive; I watched it on a DVD) becomes in that moment a somewhat creepy treatise on just how quickly we've evolved from the convention there in the early 1980s to the other day when IBM recreated a cat's brain in a mainframe. Computer Chess is thoughtful, engaging, funny--a genuine surprise.