by Walter Chaw The best scene in the surprisingly-not-awful 6 Souls happens in a toothless hinterland, up yonder in them thar hills, 'round campfires and lean-tos and a wilderness of patchy facial hair, where forensic psychologist Cara (Julianne Moore) meets a Granny Holler Witch (Joyce Feurring), who is just indescribably awesome. She's like a refugee from The Dark Crystal--the very incarnation of Aughra, blind but seeing through an albino familiar (Katiana Davis) as she performs psychic surgery, sucking up souls with her mouth and depositing them in a jar she calls "shelter." Indeed, it's such an awesome scene that it shows up how perfunctory the rest of Mans Marlind and Bjorn Stein's 6 Souls is; how the idea of a demon jumping bodies (like The Evil Dead, yes, but more like Fallen) can look very much like an early-'90s mid-prestige thriller and therefore not anything interesting or special. A shame, as the talent assembled for the piece is exceptional--Moore, certainly, along with the always-fabulous Jeffrey DeMunn as Cara's dad Dr. Harding. It's his fault that Cara gets involved with psych-patient Adam (Jonathan Rhys Meyers), who, in the process of manifesting multiple bad-accent theatre personalities, also seems to be manifesting their physical traits (like paralysis, say, and bad acting, too). Turns out it ain't science afflicting our man Adam, but you knew that already.

What follows is an excellently-shot, completely familiar child-in-peril bit (Cara has an adorable Newt-like daughter) that has at its core a fascinating conversation on the power of faith and the presence of God, albeit no more fascinating than any film about demonic possession and the existence of souls. What sets 6 Souls apart to the extent that it's set apart are the performances from Moore and DeMunn (Nathan Corddry, too, as Cara's brother--and of course Granny Feurring) and a late appearance by the always-creepy-now Frances Conroy as the mother of one of the eponymous souls. "Your textbooks have failed you, isn't that right?" says Conroy's Mrs. Bernburg--just the first in a constant flood of thesis statements meant to clarify that this supernatural thriller is a supernatural thriller. Beyond that, there isn't a lot going on: Believe in God and God will protect you; don't, and He fucks you or, by neglect, allows you to get fucked. It's kind of the Westboro Baptist Church: The Movie, but I wasn't offended. Fundamentalist bigotry isolated in the vacuum of a picture nobody saw is too pathetic to be offensive. In that context, a moment where a little girl getting a bath states that she doesn't believe in God because her father was killed is surprisingly potent--a moment undermined by an unwillingness to pay off her infant atheism in the appropriately goopy way. (Or at all, really.) At the end of the day, 6 Souls is very much like another Julianne Moore thriller, The Forgotten: workmanlike, if sometimes better than that, it plumbs no new ground but is, small favours, no great chore to endure.

Taken with Colin Theys's Dead Souls, in fact, the two flicks become a potentially interesting diptych about faith-healing and what happens when parents think they can pray illness away. Maybe they're right. At the very least, dead is no longer technically "ill," yes? This one, a Chiller-channel original, opens promisingly enough with a wackadoo reverend murdering his wife and children, nailing them to the crossbeams of his basement, then declaring in high Empire Strikes Back fashion that, lo, there is another. Years later, teenage Johnny (Jesse James) receives a letter announcing that he's inherited his birth-family's murder-farmhouse; he didn't even know he was adopted. Returning "home," he discovers all the terrible secrets of the family reserve, fends off what appears to be every crow in the state, and unleashes the horror of the great god Osiris. Yes, it's a made-for-cable fright-flick written by the Tori Amos fanclub. What I'm saying is that it's not that good, not even with the introduction of a love interest in comely Emma (comely Magda Apanowicz).

The script by John Doolan is one culprit, the flat direction by Theys another, but truly there's enough blame for the general dtv suckage to go around. Genre vet Bill Moseley cameos as a small-town sheriff, and then there are possessions, ghostly shenanigans, zombies (kind of), and a ridiculous séance punctuated by the least scary door-slamming in the world. Weighted down by yards of exposition, a hilarious axe-to-the-gut scene (and a more hilarious burning-a-guy-to-death scene), and editing that can only be described as prosaic and lackadaisical, Dead Souls, sufficed to say, is one of those movies you spend months trying to get through and seconds forgetting entirely. Star of the show goes to a nice-seeming German Shepherd that counts as the most non-threatening canine antagonist since the titular menace of Devil Dog: The Hound of Hell. With its sedate gore and sedate clothed-sex, Dead Souls comes off like some benighted mash-up of "The Waltons" and The Evil Dead. Which sounds awesome, I know.

THE BLU-RAY DISCS
Anchor Bay ushers 6 Souls home to Blu-ray in a handsome 2.35:1, 1080p transfer that reproduces a sepia-tinged palette and dense but not opaque shadow detail with exceptional, filmic fidelity. (Sitting on the shelf since 2010, the picture was shot in Super35.) The image is razor-sharp with nary a hint of digital artifacting, some light crush not withstanding. Check out the campfire-in-the-Ozarks sequences and marvel at the finely-wrought embers licking at the night. It's an especially gratiftying presentation because the look of the film is arguably the best thing about it. The accompanying 5.1 DTS-HD MA track honours a mix with persuasive atmospherics and a nice use of the rear channels during the father's death; 6 Souls' sound and visuals point to a future for directors Marlind & Stein. There are no special features on the disc.

Scream Factory's BD release of Dead Souls only brings into relief that this is a zero-budget, basic-cable production shot in lustreless HiDef video. Not much to complain about, ultimately, except that the 1.78:1, 1080p transfer can't help looking like a particularly good VHS dupe recorded in SP speed. The 5.1 DTS-HD MA track is a little more vivid, but the mix is routine. Meanwhile, a 7-minute "Blooper Reel" (HD) is stuff not breaking when it should and breaking when it shouldn't, plus a quick hit of Geraldine Hughes, as Johnny's possessed mother, crying out "my vagina" when a rubber axe hits her vagina. You know, for German audiences. I did sort of enjoy a couple of gaffes involving crows not doing what the filmmakers want, which, you know...I guess I was pretty desperate to be entertained by that point. A pretty useless "Set Tour" (6 mins., HD) finds director Theys walking around shooting selfies and making a reference to Resident Evil. For what it's worth, Theys seems like a nice, organized guy. A yakker with Theys, Doolan, and producer Andrew Gernhard is collegial, chummy even; they are infectious in their enthusiasm for not this project, necessarily, but any project. Lots of location trainspotting that's not interesting, name-dropping of people I don't know, and fond recollections of instances and errata that can be interesting to no one but these three people. 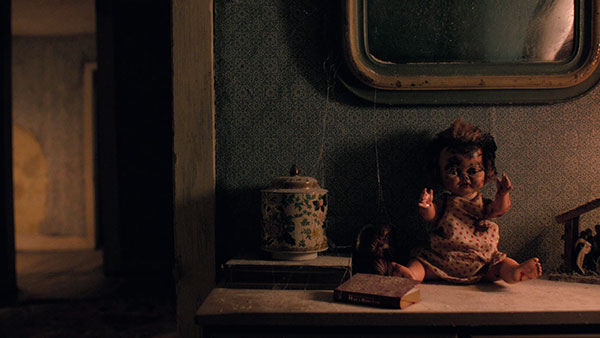