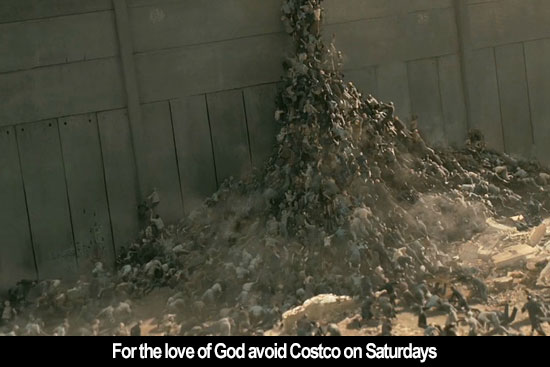 by Walter Chaw Marc Forster's World War Z, an adaptation of Max Brooks's cause célèbre novel (think Stephen Ambrose on the zombie apocalypse) that had a production so troubled the real surprise is Terry Gilliam had nothing to do with it, lands as half an idea, handsomely mounted in a really expensive crater. With almost no relationship to the book beyond honouring its concept of a conflagration told in vignettes, it feels almost exactly like James L. Brooks's I'll Do Anything, which began life as a musical and ended up, after extensive reshoots and careening budget overages, song-free, yet whole somehow despite the trauma. That sense of a sudden change in direction, in genre, is all over World War Z--something in its almost apologetic reserve, something in its unmistakable indecision. Indeed, it serves as a fitting metaphor for a zombie as a corpse similarly brought to shambling half-life, but frankly, it could've been a lot worse. It works for what it is in the same way that Steven Soderbergh's Contagion works, and with the same limitations, ambivalence, anticlimax, and handsome mounting. If, at the end, its Damon Lindelof-penned solution* (the twelfth-hour salvation of a freight train jumped its tracks) is as stupid as you would expect something Lindelof to pen, at least the journey there is interesting, even occasionally (if only very occasionally) arresting. A shame that Forster hasn't gotten any better at directing action since Quantum of Solace.

Its first miscalculation probably the implementation of a central character, World War Z follows the globetrotting derring-do of former U.N. hotspot navigator Gerry Lane (is in my ears and in my heart) as he's pulled back into action to suss out "patient zero" in the zombie pandemic. A family-man first, Gerry (Brad Pitt) escapes Philly, I mean Newark, I mean some hell-hole, finding sanctuary on an aircraft carrier where the best and brightest and the Declaration of Independence are secreted to wait out the early days of the blight. Gerry travels to Korea, then to walled Jerusalem where idiot wailers make too much noise. He takes a Belarusian jetliner in the picture's coolest set-piece, then visits Wales, I think (Cardiff?), where Lindelof saves the day with a way to end the movie without a bazillion-dollar epic slaughter that we still get glimpses of in a hastily-edited, wearily-narrated epilogue. The film's best idea is to present the zombies as insectile, clambering over one another in complete disregard of personal space. The worst idea is its attempt to give Gerry depth with a family in peril it promptly relegates to the sidelines before reintroducing at the end in what feels like every bit the equivocal band-aid that it is.

World War Z is bad, yet, miracle upon miracles, it's not unforgivably bad. No, it's serviceable fare more fatally wounded by the prevarication of making a zombie movie featuring millions upon millions of deaths (hundreds shown) within the chaste confines of the PG-13 rating. Without gore, without any coherently-shot action sequence that could have lent sense and scale (and, consequently, tension and pathos) to the proceedings, and without real characters to root for beyond broad sketches and Pitt's generic man of action, all that's left is a curiosity forever right on the edge of being a better movie. The standard for me in this vein remains Juan Carlos Fresnadillo's tragically under-seen 28 Weeks Later, the mere identification of which suggests that World War Z also has the misfortune of coming at the very end of a played-out thread--one peppered with a few too many masterpieces to compete against. Still, certain elements--such as Daniella Kertesz's star-making turn as an Israeli soldier, that airplane sequence, Pitt's undimmed star quality, or the emergence of Mireille Enos as someone to watch--provide World War Z with just enough meat to not entirely suck. It's mediocre. Huzzah!

*SPOILER: The solution of the piece is that if humans inject themselves with a terminal disease, the zombies will avoid them because the zombie contagion desires a "healthy" host. Except--and one of the characters explains this as the reason infecting zombies with something else wouldn't help--that being dead means you don't have a functioning circulatory system. Which also means that unless the disease is neurological somehow and terribly advanced, it also shouldn't matter whether the host has a terminal illness. return

Walter’s a great essayist, but who knew he had a degree in advanced microbiology? Thus he debunks WWZ’s ending and saves us low-watt masses from interpreting it as it was intended, a lesson in finding creative solutions outside the box, or something like that. If only he protected us from the scientific incorrectness of so many other films: "Jurassic Park" (cloning dinosaurs through embalmed mosquitoes is preposterous), "Alien" (a mouth inside a mouth would choke it to death) and "Raiders of the Lost Ark.” (Closing your eyes does not protect your head from being exploded, shriveled, or melted by pissed-off angels. OBVIOUSLY.)