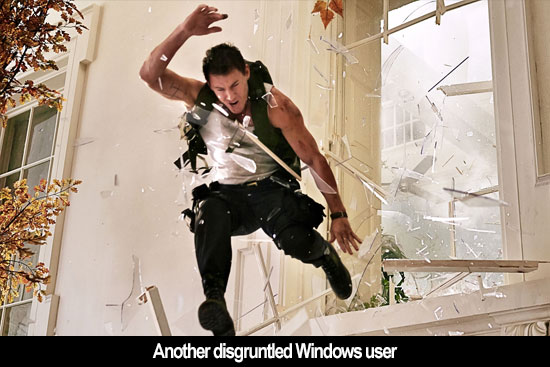 by Angelo Muredda Leading up to the release of Anonymous in late 2011, Roland Emmerich joined screenwriter and professional blowhard John Orloff in a series of quasi-academic debates about the supposed true origin of the works of William Shakespeare--which they attributed, as is the fashion among a school of cranks that includes Derek Jacobi and John Hurt, to the Earl of Oxford. Let us only say of that turgid, classist bore, the most distressing of his disaster movies, that petty conspiracy theorizing does not suit Emmerich, at heart a good old liberal pussycat who likes to blow things up, then shoot the shit about the horrors of global warming. Despite its vague interest in U.S. foreign policy (i.e., its firm belief that it sucks), White House Down is a more modest affair, and all the better for it. Stupid is easy but stupid fun is trickier to pull off, and more than anything Emmerich has made since Independence Day (a decent ham sandwich), this Die Hard clone, complete with Channing Tatum in a sleeveless shirt, at least delivers a pretty good time.

Tatum plays John Cale, a member of the security detail for the Speaker of the House (Richard Jenkins, dithering away) who has his eyes set on a job at 1600 Pennsylvania Ave., on account of his estranged tween daughter Emily (The Dark Knight Rises' ambiguously-gendered MacGuffin, Joey King) is a huge fan of all things presidential. John blows the interview, chaired by his gently ball-busting ex-girlfriend, Secret Service agent Carol (Maggie Gyllenhaal), but he manages to score some free passes to a tour of the White House, getting some face time with charismatic egghead in chief James Sawyer (Jamie Foxx) in the process. All's well until the house falls to a ragtag bunch of mercenaries, fronted by an angry white dude named Emil (Jason Clarke)--is this the first actioner where hostage-taker and hostage share a name?--but secretly run by an even older angry white guy (redacted), leaving an abruptly deputized John in charge of POTUS's well-being and in search of his scrambling daughter.

That White House Down is ridiculous goes without saying: this is birthed from the same mind who sent Gyllenhaal's brother on a race against a descending wave of frost in The Day After Tomorrow. But there is a certain pleasure to easing into Emmerich's dopey universe, a childlike place where the President is just a nice guy who wants world peace and there is no honour in the world higher than being called to serve as his bodyguard. It helps that the simplistic politics, normally blatantly fascist when terrorists are the villains, tend to fall on the left side of the aisle, not because that makes them more ethical but because we so rarely see white fundamentalists and Islamophobes called out as America's dark Other. There are limits to our indulgence of that scenario, of course, chief among them an idiotic news blip that has poor Ben Mankiewicz assess, from shoddy iPhone footage of the white baddies, that they are "clearly not al-Qaida." Yet so distressing is the state of these movies that this backwardness counts as a kind of progress.

Such lapses are perhaps more forgivable in light of the starry-eyed throwback spirit of the project, which is admittedly a bit sinister in this age of mass shootings; no film since the '90s has so fetishized the muzzled pops of a silencer. One would be hard pressed, though, to justify the bloat of the first act, an all-smiles intro that sets up the geography of the White House in ways that never quite pay off and cues a whimsical tone at odds with all the subsequent gun violence. The twinkling score, by Harold Kloser and Thomas Wanker (who should really go by John Cale), has a whiff of Kindergarten Cop about it that never really goes away, certainly not when Emily gets up to her own heroics while Dad punches people through assorted windows and tables. (It's hard to say whether screenwriter James Vanderbilt, of Zodiac as well as The Amazing Spider-Man, is a satirist, but a news reporter's plain assessment that "Emily Cale is a little hero" is Verhoeven-worthy.) If that tonal inconsistency makes White House Down an odd watch, it also sets it apart from most of the summer's unrelentingly grim rubbish: you'll laugh, you'll furrow your brow, and you'll come out more or less unharmed.

I'd say something about the movie but I'm too busy thinking about the fact that there's someone out there named Thomas Wanker.