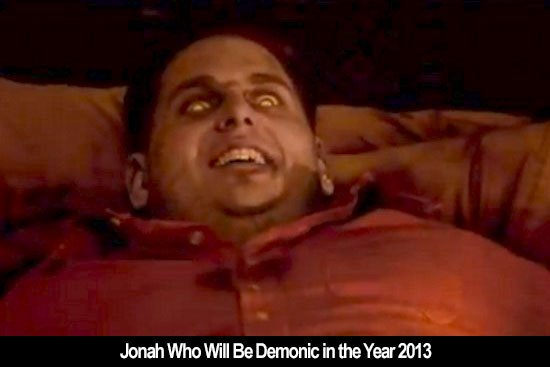 by Angelo Muredda Whatever its dramatic hiccups, This is the End can at least boast that it's one of the better full-length adaptations of a trailer. In 2007, Seth Rogen and Jay Baruchel starred in a 90-second sizzle reel--co-scripted by Rogen and Superbad collaborator Evan Goldberg--about their efforts to stay alive amidst an unspecified global catastrophe. As scrappy comedy skits go, "Jay and Seth versus the Apocalypse" was pretty good, a charming riff on the actors' schlubby personas as well as a pitch for more time and a bigger budget to drive home their unlikely survival story. The trouble with This Is the End, a funny but belaboured riff on that premise, is that it's still trying to close the sale long after the project's been greenlit, ingratiating itself to an audience already on board. In their joint directorial debut, Rogen and Goldberg show a knack for characterization but seem anxious about where to go from there, squandering a gifted ensemble in a procession of spotty "what if" scenarios that don't resemble a movie so much as a glimpse into a celebrity edition of charades in Judd Apatow's basement.

Though Apatow's the spiritual godfather to most of the cast, the film actually takes place in James Franco's L.A. mansion, a monument to his nice-guy celebrity lined with all manner of avant-garde knickknacks and shoddy paintings. The setting is Franco's star-studded housewarming party, begrudgingly attended by straight man Baruchel, just in from Montreal to visit hetero lifemate Rogen, from whom he's become estranged on account of the latter's newfound closeness to Franco and the allegedly odious Jonah Hill, who can't stop reminding people that he's "from Moneyball." When Rogen and Baruchel take their strained friendship outside for a smoke, they're nearly levelled by an apocalyptic hailstorm that sees sinners cloaked in fire and the redeemed beamed to the sky for the post-Rapture. Rattled, they hurry back to their safe house, where Franco, et al (including Craig Robinson and a villainous Danny McBride, who the apocalypse has turned into a freeloader) are battening down the hatches with his bad art.

You could accuse the project of being nothing but an indulgent joke between multi-millionaires, but as in Spring Breakers, it's hard to dismiss Franco, who despite his recent doddering (as a writer of think pieces for VICE, as a documentarian) is increasingly seeming like some kind of comic savant. His hangdog gentleness when offering Rogen his most prized painting--a pair of tableaus with nothing but his name and Rogen's spray-painted on them, in memory of "Freaks and Geeks"--is somehow endearing. The filmmakers' sly trafficking between the pretentious, art-school Franco persona and the bygone Franco of "Freaks and Geeks" is good stuff, even if their ultimate purpose in playing with his image seems to be insular--a back-patting acknowledgement that their famous friend contains multitudes. Baruchel, too, is well-used as the disgruntled audience surrogate, his Canadian humbleness so embedded in his body language at the snotty party that you can see why he'd pause before choosing a fortified Casa Franco over the Rapture.

As nuanced as these character beats are, and as funny as the gags built into them turn out at times, there isn't much reason to care about these celebrity avatars' fight for survival and self-betterment via overlong set-pieces--among them an impromptu sequel to Pineapple Express and a supply raid that namedrops the cast's earlier work. Those moments seem designed to congratulate the audience for recognizing, say, the camera from 127 Hours, but there isn't much to the citation beyond the reward of noticing it. Worse, the moralizing detour in the last act is a compromise, even if it reflects the filmmakers' actual religious sensibilities. It's a way to combat the listlessness of the script by upping the stakes so that Franco and company's very souls hang in the balance. When they're on their game, Rogen and Goldberg have a light touch, a warm interest in the way that straight guys inarticulately fumble towards expressing love for their fellow men. This heavy-handedness, then, is unbecoming--as awkward as the attempts to justify the all-male cast at one point with a disastrously unfunny discourse on whether a bunch of dudes in a house might give off "rapey" vibes to a lone female survivor. (If you have to ask...) Some will no doubt find that self-awareness clever, but it doesn't look good on a movie that excels when it's at its least ostentatious, thereby fulfilling that trailer's promise.