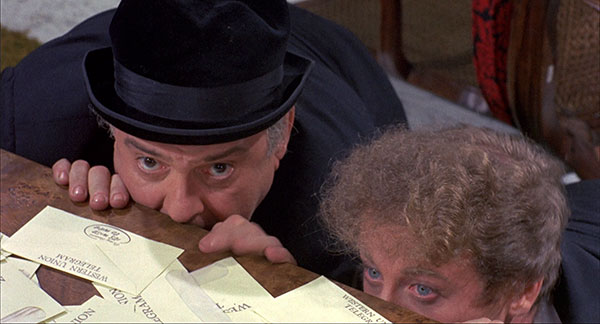 by Walter Chaw A seminal year for film, 1968: Once Upon a Time in the West, Rosemary's Baby, Planet of the Apes, Night of the Living Dead, 2001: A Space Odyssey, Barbarella, If..., Targets, Faces, Danger: Diabolik...and, some would say, Mel Brooks's The Producers, a film back in the limelight thanks to the record-breaking, award-winning Broadway play on which it's based now coming out as an extraordinarily ill-advised feature film of its own. Unlike Brooks's other classics (Young Frankenstein, Blazing Saddles, even High Anxiety), The Producers has aged pretty poorly. It's played broad, which is to say that everyone acts like they're being defibrillated every five minutes, leading to a lot of high-decibel screeching and running around in circles. And I don't really understand what the film is about: Is it an attack on the theatre, or is it an attack on Nazis? If it's neither, if it's instead some kind of vaudevillian farce about the last days of Jewish entertainment hegemony, then perhaps that's as good an explanation as any for why its prehistoric rimshots, timing, and attitudes strike me as puzzling. Maybe it's a satire of being a Jewish comic.

Understand, I'm not arguing for sophistication--I'm the guy who still laughs himself blue at the campfire farting scene from Blazing Saddles (not to mention the moment the "first critic" pisses on a cave drawing in History of the World: Part I). But The Producers has an archaic ugliness to it that feels like the equivalent of hanging out at the old folks home with the resident deaf racist. It's Krusty the Klown's stand-up routine ("Me so solly!") played at maximum volume by an unsurprising Zero Mostel and, in full doe-eyed man-child mode, Gene Wilder, the latter demonstrating a little of the ingratiating insipidity that would become his discomfiting persona for all time. He's like a baby monkey--you get the feeling he'd cling to your leg if you let him.

With the help of accountant Leo Bloom (Wilder), failed Broadway impresario Max Bialystock (Mostel) embarks on a scam to bilk his old-lady investors out of thousands by staging a guaranteed flop. The production is "Springtime for Hitler"; it's a big success; the boys go to prison; and somewhere in there should be a criticism of the popular taste, but alas, this relic is presented sans any hint of self-awareness. People love the show-within-the-film because the people in it are so stupid and grotesque that just the fact of them makes the scary propaganda of the piece a satire.

Same could be said of The Producers proper, what with its drooling leads and bug-eyed spit-takes. Brooks is a genuinely awful director when he lacks a template to lampoon, thus here we get medium shots filmed on echoing soundstages that nonetheless manage, somehow, to convey suffocating claustrophobia. It's lit like a discount mega-mart, and the set design is garish and eye-stabbing. My editor Bill suggested to me that it was photographed for the blind--I'd offer that it was recorded with deaf people in mind as well. Why say what you can scream? I do wonder whether I simply don't understand the genre very well, whatever sub-genre of comedy The Producers allegedly belongs to; maybe there's poetry to it, like a Godard or a Bresson, that I need to have an ear for before full appreciation sets in. But to my sensibilities, The Producers is loud, obnoxious, ugly, tiring, and, above all else, tired. If only there were some offense to the leering at dumb secretary Ulla's (Lee Meredith) bosom, or some cachet to taking the piss out of Hitler (shades of the worthless Indiana Jones declaration "Nazis: I hate these guys!" Way to take a stand, Spielberg and Brooks), but one is left only with this funny feeling that back when Brooks and Carl Reiner introduced their 2,000-Year-Old Man shtick, they weren't conceptualizing so much as having their regular conversation.

THE DVD
Packaged in a swingtray keepcase with a cardboard slipcover, the two-disc Deluxe Edition of The Producers has been timed to coincide with the theatrical release of the film of the 2001 musical. (I'm reminded of that old Nora Dunn SNL skit where she plays a French songstress singing "Send in the Clowns" translated from the "English to the French back to the English" and ends up warbling a word candy garble to the rough outlines of a tune that wasn't that super in the first place.) The first platter contains the film in a beautifully-saturated 1.85:1 anamorphic widescreen transfer that comes across as warm, free of defect, and exceedingly bright. It looks as though a clown exploded in there. The widescreen presentation shares space with a full-frame alternative that, to my eye, boasts slightly less fine detail. Both a DD 5.1 remix and the original mono track are on board, the latter of which is the preferred option: Though the musical sequences are spacious and loud (!) in 5.1, too often there's a weird reverb effect that speaks to me of a lot of unused, wasted studio space.

Moving on to the second disc, find a long making-of documentary (64 mins.) split into five chapters and featuring the surviving principals discussing the seminal nature of the piece at length. Brooks recounts how Dustin Hoffman was penciled in as the crazed Nazi playwright until Mike Nichols asked him to try out for The Graduate, while Wilder, in his warm, honeyed-drawing room aspect, recalls that he was actually afraid of Zero, lending veracity to his oh-so-realistic performance. Andreas Voutsinas claims he was asked to do a drag version of Marilyn Monroe for his characterization of Carmen Ghia, and Kenneth Mars reveals how his method of sleeping in costume created a stench that made his co-stars sick. The only real low point is when an aging Lee Meredith is asked to recreate her "sock it to 'em" dance side-by-side with her young self, obliges, and then tosses in a little of the eurotrash porno accent she created for the film.

"A Look at the New The Producers" (2 mins.) is a trailer for the Golden Globe-nominated possible worst film of the year. "Sketch Gallery" (2 mins.) alternates animated storyboards and blueprints of the set. A "Playhouse Outtake" (4 mins.) is the Franz Liebkind dynamite scene that was elided from the theatrical version but restored for television broadcasts and is, as it happens, recapitulated in the new film, while a "Photo Gallery" collects forty-one behind-the-scenes and publicity stills. Lastly, Paul Mazursky reads a statement from Peter Sellers (1 min.) published in VARIETY in 1968 that demonstrates once and for all, with no room for questioning, that Sellers really liked The Producers. Previews for the West Side Story Collector's Edition, Monty Python and the Holy Grail Special Edition, Spaceballs Collector's Edition, and Rent round out the set. Originally published: January 9, 2006. 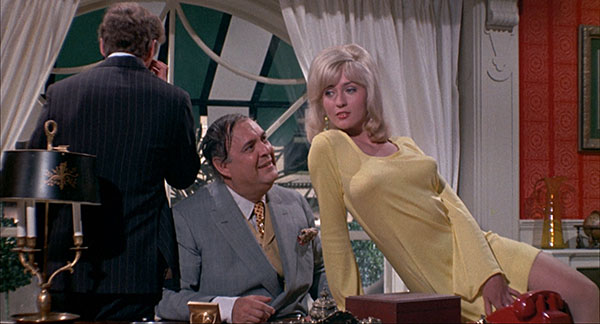 THE BLU-RAY DISC
Shout! Factory brings the original The Producers to Blu-ray in a very good 1.85:1, 1080p transfer. The image is free of major print defects while sporting a palpable but tight grain structure; it feels extremely cinematic, though hints of crush--particularly in the depths of Bialystock's natty wardrobe--yank the viewer back to the digital present, and skin tones occasionally veer into cake-frosting territory. For sheer picture detail, neither the MGM DVD nor Shout!'s own, included in this combo pack, can compare, and the film is significantly more colourful in HiDef. Audio comes in two flavours: LPCM 2-channel mono and the 5.1 remix, in DTS-HD MA. I preferred the remix, because it intensifies the gaudy theatricality of the musical numbers, although it also makes the dialogue sound that much more shouty and that's hardly a good thing. Extras are recycled in toto from the MGM platter Walter reviewed, but Shout! has added a new interview featurette whose title, "Mel and His Movies: The Producers" (19 mins., HD), suggests this will be a continuing series. Embellishing on anecdotes from the making-of, Brooks talks about the project's origins, manipulating the mercurial Zero Mostel, and Renata Adler's NEW YORK TIMES pan. (He puts more stock in Gene Shalit's rave--naturally, yet you can't help but scoff.) His bit on winning the Academy Award for The Producers' screenplay leads to a vaguely senile show-and-tell of his Tonys ("What's this one for?")--the Oscar itself is nowhere to be seen, because he considers it too valuable to leave on his office mantel. 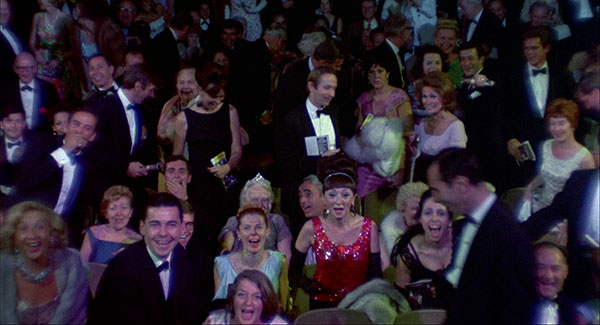 Ah, weighing in on a beloved classic 40 years too late. But this doesn't read like film criticism so much as an account of whatever mood you were in when you last saw it.