***/**** Image B- Sound B+ Extras C+
screenplay by Bob Goodman, based on the graphic novel Superman: Braniac by Geoff Johns and Gary Frank
directed by James Tucker 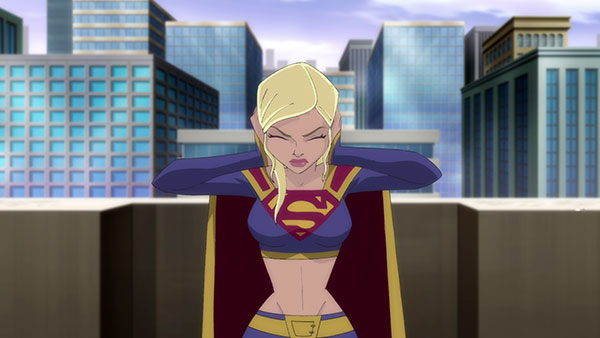 by Jefferson Robbins With Superman: Unbound, DC Universe's appropriation of anime elements for its superhero cartoons reaches its logical endpoint: tentacle rape. Our first glimpse of longstanding Superman nemesis Brainiac, a semi-organic humanoid computer, features his natural eye getting plucked out by a pincered appendage to be replaced with an upgraded model. Later, a bound and helpless Superman will have terabytes of deadly information pumped straight into his cortex by other such squidlike injectors. The last five years of direct-to-video DC Comics adaptations, many engineered by Korean production house MOI Animation, have all gone East for key sequences--the lonely drift of a Gotham cityscape, robot foes ripped from the comics to be redesigned as mechas. So I guess it was only a matter of time before weird snaky appendages tried to skull-fuck the Man of Steel.

This is not a dealbreaker. Once I vault past my core complaint (that DC really doesn't give a shit anymore about kids who love their characters, or parents who might want less chien andalou in their Smallville), Superman: Unbound impresses to a degree that none of Warner's recent dtv cartoon output has. (Put aside any questions about that title, though: it's meaningless.) It's the first entry without pioneering producer Bruce Timm, who stepped aside after last year's The Dark Knight Returns two-part video release in favour of James Tucker, director of this offering. Coincidentally or not, it has vast advantages over Man of Steel, the theatrical blockbuster it was timed to support. For one, it can launch in medias res, with Superman/Clark Kent (voiced by Matt Bomer) and wisecracking Liz Taylor-eyed reporter Lois Lane (Stana Katic, just great) a fully-fledged journalist power couple, she fully aware that she's dating an earthbound god. We don't need Russell Crowe monologuing over Socialist-Realist nanotech dioramas to know what this hero is all about. Superman's ultimate mission is a defense of life, else why spend so much energy catching people plummeting from great heights? It's an impossible job, of course, because everybody falls eventually--and a remarkable thing about Superman: Unbound is how many people die because he's not around.

Hence Superman's anxiety over protecting Lois, who has no problem letting her man pluck her from a terrorist's fleeing helicopter but chafes at Clark heat-visioning the Daily Planet's resident sexist boor (Diedrich Bader) into humiliation. The weight of responsibility on Supes's shoulders is doubled by Clark's guardianship of hot-headed young cousin Kara Zor-El, a.k.a. Supergirl (Molly C. Quinn), who survived the destruction of Krypton as a young adult and so lacks the upbringing that shaped Clark's character. Enter Brainiac (John Noble), a compulsive collector of civilizations who destroys inhabited planets once he's abducted, shrunk, and bottled one representative city, including the Kryptonian city of Kandor--still frozen in time on his big ugly flying-head starship--and Metropolis, too, should he get his way. If Superman stands for life, Brainiac is an avatar of nullity, sterility, stasis: death by other names and means. That he's brought low by life in its simplest forms both solidifies this point and gives a sideways nod to H.G. Wells.

Brainiac is the only strong visual carryover from the source material, a 2008 Action Comics arc written by Geoff Johns and illustrated by Gary Frank. As animated from Frank's design, he's a creature out of Ninja Scroll, discomfitingly alien and unknowable. Noble's voice is perfect for this, the ghost in a scary well, although the dialogue screenwriter Bob Goodman ascribes him too often defaults to "haughty" rather than the merely "cold" we'd expect from a computer intelligence. By contrast, Lois and Clark's romantic sparring is spot-on, the interactions of two strong, devoted people who each have good points about how to carry their relationship forward. I can't say enough about Bomer and Katic, who lend warmth and energy to their roles, or Quinn, who plays Supergirl as an idealistic but traumatized teen. DCU voice acting, with its deference to Comic-Con-friendly celebs, has fallen far lately, but this casting really polishes the chrome. (See also the great Stephen Root as Supergirl's father Zor-El, imbuing an alien super-scientist with folksiness and somehow making it work.) 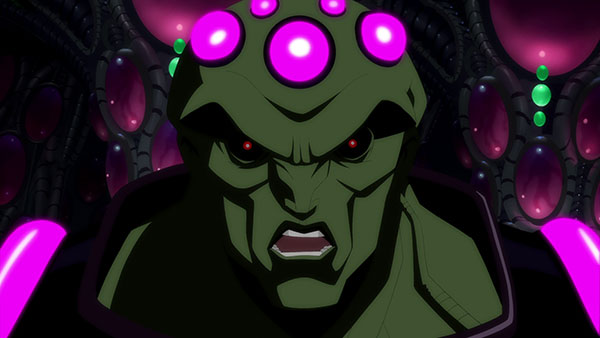 THE BLU-RAY DISC
If there are visual haemorrhages in Warner's 1080p, 1.78:1 Blu-ray presentation of Superman: Unbound, they're not fatal. Colours are pristine and never murky, yet the whole is afflicted with slight banding and--rather shockingly, at this late stage of the digital-cartoon game--aliasing. These defects fly by, however, mostly occurring in the big action segments and so not sticking around long enough to annoy. If the image softens when Superman punches through a battalion of robots, I just took that as motion blur. Soundwise, the disc's 5.1 DTS-HD MA track performs better. The mix itself is thin on quiet ambience (where are the crickets on Ma and Pa Kent's farm?) but strong in the superfights--the subwoofer and back speakers wake up for the whomps, thwacks, and blammos and suitably highlight Kevin Kliesch's grandeur-heavy score, though I miss Christopher Drake, whose music has long been the best part of even DCU's least admirable flicks.

Tucker, Goodman, and DC Entertainment exec Mike Carlin unite for an audio commentary that could easily be dismissible but winds up a fun, raconteurish, occasionally snarky take on superhero media. Carlin, a comics grandmaster in his former life, deftly addresses the comics-to-film overlap and the nerd culture that accretes around, and at times impairs, this marriage. The film projects need to appeal to non-fans, he says, which risks alienating a fanbase so touchy it used to write angry letters if Superman's cape got torn. Brainiac, in Carlin's view, is the ultimate comics collector, "Taking all these cities, putting them in his plastic bag, and then never looking at 'em." The trio spends a bit of time dissing the Richard Donner Superman movies (up to and including Superman Returns) for their lack of Big Punching. Although Tucker cops to an attempt to reproduce Frank's style in early character designs, Frank's Superman is basically a facial study of Christopher Reeve, so that would've been silly. Elsewhere, the documentary "Brainiac: Technology and Terror" (25 mins., HD) lets human ballcap Geoff Johns wank out over his revivification of the classic character, while senior comics scribe Marv Wolfman (who with artist Ed Hannigan gave the pink-and-green cyborg a more aggro Terminator body in the 1980s) casts an eye back on Brainiac's genesis and implications. "Kandor: History of the Bottle City" (17 mins., HD) explores how Superman came to possess a preserved piece of his homeworld, and the ridiculous stories that spun from that. "It did bother me, in a sense, that he didn't just open the bottle," says Wolfman, appearing alongside Bob Goodman, Mike Carlin, and DC Comics co-publisher Dan DiDio.

"A Sneak Peek at DCU: Justice League: The Flashpoint Paradox" (11 mins., HD)--a title so colon-happy it needs a proctologist--surveys the upcoming dtv release that equips happy-go-lucky superhero the Flash with the mandatory Dark Wound In His Past. Apparently there's a memo at DC that says something like, "Everybody loves Batman; therefore, all our characters are now Batman." Naturally, Johns wrote this source comic as well. The quick talking-head featurette reveals the voice cast--Kevin McKidd as Batman! Cary Elwes as Aquaman! Michael B. Jordan as the guy saddled with the continuing effort to make Cyborg happen!--and lets Johns and the production staff try to justify their actions. When Flash/Barry Allen speeds back in time to prevent his mother's murder, the DC Universe becomes "a very dark place," says director Jay Oliva, like that's a new thing. Nathan Fillion is back in a cameo as Green Lantern, a sign of the DCU's love for our Captain Reynolds, and I'm willing to bet that relationship helped his "Castle" co-stars Katic and Quinn land their Unbound voice roles. I'm grateful if so.

Four episodes of the '90s "Superman: The Animated Series" are on board, each a lo-def 22 minutes--part of that infuriating value-added tactic that DC employs when it should be remastering these great old TV properties for new Blu-ray box sets. But no, that would undermine whatever version of Superman/Batman/what-have-you they're selling this week. The transfers here serve only to show up the softness and pixellated resolution of the originals, now with bonus upscaling artifacts. A Man of Steel trailer autoplays on startup along with one for LEGO Batman: The Movie, probably the only current DC iteration I can comfortably show my kids. The DVD platter in this package contains the main feature, the Flashpoint preview, and nothing else save the UltraViolet digital download option. Follow Jefferson Robbins on Twitter 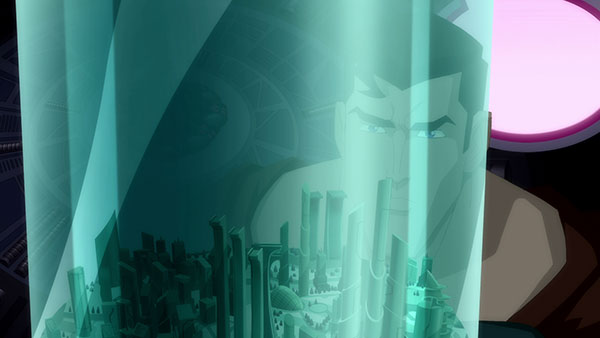