by Walter Chaw Based on L. Frank Baum's little-known Pussyhound of Oz, Sam Raimi's career nadir Oz the Great and Powerful (hereafter O-Gap) answers the question of who you would ask to anchor your $300M+ tentpole extravaganza: yes, James Franco, who's now claimed the mantle of the worst actor in the United States from the quiescent Paul Walker. Franco is an avatar of the picture's bad decisions, from the Zach Braff-voiced CGI monkey sidekick to the sassy CGI Hummel figurine to the tragic miscasting of Mila Kunis as Theodora, a.k.a. the Wicked Witch of the West. Yes indeedy, fans of the MGM original, of Baum's wondrous series of books, and of the shit-show "Wicked" will all hate it equally--almost as much as neophytes to the whole damned mess who will come for what Raimi's proudly proclaimed "the ultimate Disney movie" and leave with a mouthful of exactly as promised. It's blindingly obnoxious, tasteless in a meaningless way, and occasionally makes reference to Army of Darkness just because, I suspect, Raimi's last-resort defensive posture is to fall back on what he knows. But it's not nearly enough to save him here. The argument with weight is that the more expensive a movie becomes, the less likely it's going to be good; the first clue that Raimi is creatively bankrupt is that while his buddy Bruce Campbell appears in this film, Campbell isn't the star.

Campbell was tailor-made for con-man/lothario Oz (Franco), a small-time carnival illusionist in Kansas (and Oz-ites, take note: Didn't Oz arrive from Omaha? Never mind) who spends his time duping small-town lovelies into turning tricks for the little trinkets he conjures for them. Soon a twister whisks him to Technicolor Oz, where he meets waifu Theodora; is declared the fabled saviour of the land; and is taken to Theodora's sister, Evanora (Rachel Weisz), the two of them conspiring to have Oz kill sweet Glinda (Michelle Williams)--who, in her Kansas incarnation, is betrothed to some dude named "Gale." Follow? It doesn't matter if you follow. There's a yellow-brick road, copyright-circumventing references to cowardly lions and scarecrows, and Munchkins used as adorable comic relief. None as adorable, however, as monkey man-servant-cum-bellhop-cum-pimp Finley (Braff), who, at the insistence of the Magic Kingdom's braintrust, was amplified in the final incarnation to Kong-ian bloat. He, Oz, and made-of-china China Girl (Joey King) wander around familiar sets (reanimated into shambling, eye-stabbing half-life in a giant 3D-abomination-producing mainframe) while nobody except Williams manages to protect their dignity. Oz, it goes without saying, is a real motherfucker who needs to learn in a short 140 minutes how to be the hero the backwards townsfolk of Oz are waiting for. 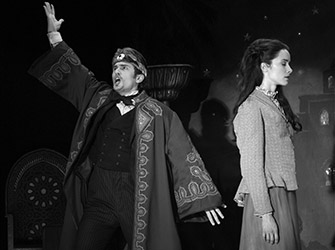 Though it's been decades since I walked out on a film, the temptation was as strong during O-Gap as the flight urge that overtakes one whilst watching Ron Howard's The Grinch--and for the same reasons. It's a movie that has no audience; in its attempts to please everyone, it pleases no one. Oddly inappropriate for children but not inappropriate enough for adults, it's clumsily-plotted, poorly-paced, atrociously cast, and so on and so on. By any measure it's awful--too long, too garish, too unsure of itself, of whether it's trying for slapstick or nickelodeon nostalgia or sentiment (stretched to the point of mawkishness in a denouement manufactured for maximum self-reference). There's nothing going on beneath the surface and too much going on above, and it represents what is frankly the first movie by Sam Raimi I haven't liked even a little. The biggest shame is that there is an absolute treasure trove of startling images and great stories to be mined from the Oz mythology, yet O-Gap, with its feeling of shit being made up as it goes along until we've lapped well over two hours, only has the wit to create a story based entirely on Oz's ability to get some strange and how a woman scorned, denied a man's sweet attention, can be a real witch. I have no doubt there'll be worse movies than this in 2013. I do have my doubts that I'll hate any of them more.

THE BLU-RAY DISC
by Bill Chambers Whatever you can say about Oz the Great and Powerful proper, its technical presentation on Disney's 2-D Blu-ray release (Blu-ray 3D sold separately) is above reproach. The 2.40:1, 1080p transfer is windowboxed for the duration of the black-and-white prologue, which boasts exquisite contrast that doesn't falter once the movie transitions to colour. Compositing is never not dreadfully obvious and saturation has an artificial intensity, yet the image is remarkably filmic, showing up the pastel pallor of Alice in Wonderland, Oz's spiritual forebear. While I wish that less of the picture were dimly-lit in the Peter Deming tradition, there is detail in the shadows and quite an impressive sense of depth, considering this is the "flat" version. Aside: In a clever, inclusive-feeling touch, if you watch the film with the English SDH activated, they go from white to yellow after Oz lands in Oz. Also, the opening titles are reanimated in French and Spanish depending on the selected language. Oz el poderoso!

Matching the video is a 7.1 DTS-HD MA track containing a "near-field" reconfiguration of the theatrical mix. It's the goal of near-field to optimize audio for smaller rooms equipped with cheap, out-of-the-box type speakers (i.e., home theatres), and this is accomplished, for all intents and purposes, by reducing the dynamic range between loud and quiet. Frankly, I think filmmakers are overconfident about the average multiplex venue's ability to reproduce hushed dialogue and subtle sound effects, what with modern moviegoing consisting of teenage projectionists who forget to raise the volume and Chatty Cathies competing to be heard over the film, so I almost believe that near-field should be the industry standard. At any rate, "Oz the Great and Powerful" describes the mix on this disc to a T. It's robust, dizzying, and contains perhaps the most convincing sidewall imaging I've ever heard at home. It would be nice to have the theatrical audio for comparison's sake (actually, it is on there, but in lossy DD 5.1), though I say that academically. For what it's worth, DD 2.0 is the default, something the studio is nice enough to warn you about in advance.

Supplements begin with a Second Screen app that evidently does not appear on the Blu-ray 3D alternative--in fact, the B3D relegates all of the belowmentioned bonus content to a new web interface called Digital Copy Plus. (Lucky 3D reviewers.) Special features begin in earnest with "Walt Disney and the Road to Oz" (10 mins., HD), covering Walt's desire, never consummated, to adapt L. Frank Baum's Oz stories as a live-action musical called The Rainbow Road to Oz. A clip of one of the numbers from its screenplay being performed on "The Mickey Mouse Club" suggests a major bullet was dodged. (Former Mouseketeer Doreen Tracey remembers Annette Funicello looking at Walt after that episode wrapped and saying, "I don't see him smiling.") Disney eventually made Babes in Toyland instead.

Except in its garish colour-timing, "My Journey in Oz by James Franco" (22 mins., HD) isn't as self-indulgent as Franco's side projects tend to be. On the other hand, it's incredibly self-indulgent, in that it's twenty minutes of Franco interviewing his co-stars and Sam Raimi as he slumps back in a chair like a debauched Mike Wallace. Still, I like that he gets Raimi to discuss how the project changed with his involvement, which, tellingly, leads Raimi to kind of offhandedly dismiss Baum's Oz books. It's also the only place in these extras where you really get a sense of how the set functioned--I assume they used bluescreen instead of green because otherwise the Wicked Witch wouldn't register on camera. "Before Your Very Eyes: From Kansas to Oz" (11 mins., HD) profiles production designer Robert Stromberg, who also worked on Avatar and Alice in Wonderland. That and the fact that classic Disney, not the literary Oz, was his major inspiration are all you need to know, although his paintings and previz work are beautiful.

"Mila's Metamorphosis" (8 mins., HD) finds a pliable, patient Mila Kunis getting an old-fashioned foam-latex makeover courtesy Howard Berger of KNB. There's some actressy guff in a separate talking-head but the most interesting stuff is Berger walking us through techniques passed down from legendary makeup man Dick Smith. At one point they mention that after nine hours the glue starts to separate and feel like bugs under the skin; I'll bet having these appliances removed at the end of the day is almost a high, like getting a cast off. "Mr. Elfman's Musical Concoctions" (7 mins., HD) opens with Elfman recounting a phone call he received from Raimi inviting him to score Oz the Great and Powerful, but the piece is deafeningly mum on the subject of their weird, newsmaking feud from a few years back. (Elfman, who once said he'd rather go back to waiting tables than work with Raimi again, describes their collaboration as "always fun.") Nevertheless, Elfman gives good soundbites, explaining how he wrote a waltz to be played on set and was relieved to discover a year later that it lent itself to becoming a theme for the Wicked Witch of the West. I often appreciate Elfman's latter-day scores more after hearing him talk about them, and that is definitely the case here.

Lastly, a five-minute gag reel (HD) is funny--mostly for Raimi's little offscreen wisecracks ("It looks like you're trying to chloroform her")--but too long and mainly of value for revealing that the entire film was shot in colour at 1.78:1. HD trailers for The Lone Ranger, "Once Upon a Time", The Little Mermaid, Iron Man 3, and "Disney Infinity" cue up on startup, while DVD and Digital Copies of Oz the Great and Powerful take up space in the keepcase.

Holy Christ was this a giant turd. I'm glad a critic finally called out James Franco ( Did like his Dealer character in Pineapple Express however). All the actresses looked amazing, so..there's that.