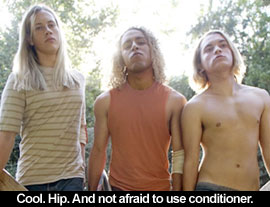 by Walter Chaw Because Catherine Hardwicke never met a rack zoom she didn't massage or a hard-luck adolescent's lament she didn't exploit, seeing her as a match for Stacy Peralta's semi-autobiographical account of the Zephyr skateboard team's halcyon days doesn't require that much of a squint. Directed like a heart attack and edited in such a way that most every scene ends with something breaking or someone running away, the picture is what baseball folks would call a "loud out"--a ball hit with pepper that peters out on the warning track; it doesn't even get an asterisk on the scorecard. Lords of Dogtown is the fictionalization of Peralta's interesting if overlong documentary Dogtown and Z-Boys, which detailed how the skateboard fad evolved from a combination of a lack of good surfing, the invention of urethane wheels, and a drought that created backyard terror-domes of skater-bliss in forcing California residents to drain their swimming pools. And what Lords of Dogtown lacks in characterization and narrative meat it makes up for in epileptic flash-edits, jittery camera work, and two interpretive dance sequences that drag on for long enough to point a long finger at the silliness of the whole endeavour. Call it S.E. Hinton for the new millennium, the romanticization of bad behaviour in a frantic stew turgid enough to embalm instead of bronze. Between this and her hysteria opus thirteen, Hardwicke is making a name for herself as the world's coolest aunt: arrested development in one hand, shot of Jack in the other, bail money in her back pocket.

Stacy (Elephant's John Robinson) is so straight "he don't cast no shadow." The responsible one with the job in rundown Venice Beach circa the early-'70s, he "ain't no pirate," says surf shop owner Skip Engblom (Heath Ledger, doing Val Kilmer on lots of ganja), who decides mysteriously one day to sponsor a competitive skateboard team with ringers Tony Alva (Victor Rasuk) and Jay Adams (Emile Hirsch) as well as a bunch of other kids the film doesn't have time for. It's the story of the three musketeers, essentially, with goody-goody Stacy, flamboyant Tony, and criminal-in-the-making Jay inexplicably finding fame and fortune riding a board with four wheels attached to it, though Hardwicke ingénue Nikki Reed revives her thirteen performance as Kathy Alva, the Teflon teen slut. All of the delirious myth-cum-history of Peralta's documentary is tossed aside in Lords of Dogtown in favour of endless sequences of the delinquents making asses of themselves in the unique way that wayward youths have always made asses of themselves on warm summer nights.

Lords of Dogtown fails to establish what these kids are doing on skateboards that's so different from what everyone else was doing at the time--testament to Hardwicke's limited understanding of the sport, I'd reckon, coupled with her desire to turn this skateboard movie into an allegory of Jay Adams needing a father figure. (Tony's got an abusive mini-dictator of a father, but that's better than none, Hardwicke suggests, although how Stacy turns into an Eagle Scout with his invisible parents is anybody's guess.) It's too early after just two films (with two more on the way) for Hardwicke to be this transparent about her daddy issues, and without any anchor in the actual allure of the Z-Boys, Lords of Dogtown suddenly can be about anything or nothing at all.

Hirsch again turns in a performance that the movie in which he finds himself doesn't deserve, giving his Jay something like a character arc when none is otherwise provided him by the script or the direction. It's a shame, because there's a moment where Jay is skating off a pier at sunset that has the apocalyptic feel of tottering on the brink of adulthood without a clue. There's potential here to tell a story of the ways in which money and time change everything--of how responsibility is the best present parents can give to their children. (Rebecca De Mornay does memorable work as the methadone ghost of herself.) Failing all that, there is always the trite bonds-of-friendship trope. But shake Lords of Dogtown and nothing rattles around inside: it's an empty vehicle for bad boys on skateboards biding time in eternal summers until a movie deal comes wheeling down the pipe. If only David Fincher hadn't dropped out. Originally published: June 3, 2005.