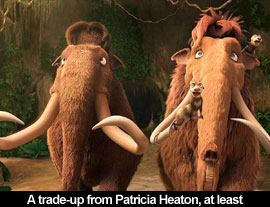 by Walter Chaw It's not entirely accurate to say that I've hated the Ice Age movies. They're not, after all, the Land Before Time series, the post-classic Disney output just prior to the Pixar revolution, or, heaven forefend, the Shrek trilogy. No, better to say that the Ice Age franchise is at worst merely the quintessence of inconsequence: they're films so bereft of wit and vigour that their biggest crime isn't the constant shit and hit routines, nor the predictable parade of unearned sentimentality, but rather that they're as inert as the right side of the Periodic Table. The message in Ice Age: Dawn of the Dinosaurs (hereafter Ice Age 3)--that no matter what our heroes look like on the outside (two mammoths, two opossums, a giant sloth, a sabre-toothed tiger), on the inside, they're members of one tribe--is the same as in the first two instalments, and by this time, its constant mantric recitation begins to take on the air of unaware self-parody. Of course, despite its incessant championing of a non-traditional family unit, like Shrek, it still has a mammoth (Manny (voiced by Ray Romano)) marry a mammoth (Ellie (Queen Latifah)), leaving cross-species miscegenation, unlike the otherwise execrable Madagascar sequel, to the actors voicing them. What I wouldn't give for the same premise in live-action with Romano married to Latifah, the latter morbidly knocked-up and royally pissed-off.

For intrigue this go-round, add manic weasel Buck (Simon Pegg), who lives in the centre of the Earth amongst dinosaurs and serves as the guide for our erstwhile heroes when one of their number, Sid (John Leguizamo), is abducted by the mother of the three tyrannosaur infants he's adopted. Inexplicable subtexts about aging and the slow tick of the biological clock are lifted half-heartedly and dropped with what seems embarrassment and relief. Even the "Scrat" interstitials that divide the franchise into still-interminable chunks here feature our little nut-loving rodent going through an entire relationship cycle with a doe-eyed Scrat-minx. It's all scored with Barry White, natch, not because it means anything, but because it's funny to think of rats fucking to soul music.

There's a lot about teamwork, a lot of stuff with jumping around platforms and sliding down shit that'll port really well to the videogame tie-in, and the birth of multiple babies that'll have every kid (and idiot) in the audience cooing into their corn syrup. But, curiously, as with the concurrent Up, there's not a lot of imagination given its premise and, more, the action sequences feel predictable and flaccid for it. The pacing of Ice Age 3 is suitably glacial, the voice acting is exhausted, and the plot points (one of them surrounding the destruction of a playground, fer chrissakes) are so elderly that the best 3-D effect in this 3-D craptavaganza would've been little puffs of grave-dirt and cobwebs exploding out from every pronouncement. It's entertainment so scrubbed of controversy and beholden to convention that even a carcass presented for consumption jumps up, comically alive, to fly away, while behind it a baby dinosaur dutifully regurgitates the animals (still alive) it had a moment ago consumed. After the deadening bulk of it, leave time for the awkward declarations of friendship and familial love expressed all around when, truth is, continuing in this tribal union means that the tiger and the sloth and the opossums remain childless and mate-less, doomed to spend the rest of their extinctions in orbit around the one-two sideshow of Romano and Latifah. All would be well if the film were not also so interested in pushing a message of complacent docility on its audience of youngsters who, whether they're getting that intellectually, are expressing it through their drooping eyelids and restlessness to flight. Beyond pointless, Ice Age 3 advocates cud-chewing and glassy-eyed platitudes; the biggest surprise is that it wasn't released directly to video. Originally published: July 1, 2009.