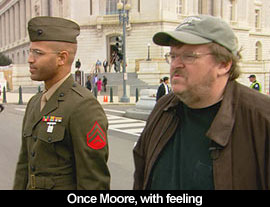 by Walter Chaw Shame on Michael Moore for the sloppy, sprawling Fahrenheit 9/11, and shame on President George W. Bush for being such a reprehensible dimwit target that the existence of such a film is possible. Fahrenheit 9/11 is a long, strident preach to the choir full of misleading juxtapositions and sarcastic asides that weaken what should be die-cast condemnations. A better film would have been two hours of just letting W. talk: drivelling his unique drivel that not only makes him sound stupid, for sure (and that's no crime), but is also dangerous and offensive to the 90% of the world (including 52% of the United States) who think he's a Gatsby with a great big sword. Bush describes going into the Middle East as a "crusade," he talks about leaving decisions to a higher power (something that Ron Reagan chose to address in the eulogy for his father), he rationalizes war by saying, "Hey, they tried to kill my daddy."

What else, let's see... He can barely contain his mirth before going on air to announce the saturation bombing of Baghdad, that famous W. smirk, famous now at least, pasted across his mug while the reality of carpet bombing a city the size of Baghdad should leave any person of conscience pasty with the responsibility of it. It looks bad for the United States. It looks bad for the human race. For the first time in history, Europeans are incapable of separating the actions of our leaders with, well, us. I think this is because so many Americans are as dangerously stupid and provincial as W.--hatred and ignorance makes us all look alike, and while that makes about 48% of us dig our heels in and invite the world to bring it on, it makes about 52% of us sick to our soul.

I'm thinking of when Curtis LeMay referred to the firebombing of Japan in the weeks leading up to the A-bomb. He said that if we lost the war, all of our leadership should be tried for war crimes. At least in WWII, we were fighting Hirohito and Hitler--in our brave new world, we're decimating Saddam Hussein's little dictatorship. (Oh yes, W. mentioned once that his job would be a whole lot easier if America was a dictatorship--it's in the film and only as funny as you think the Patriot Act is funny). I'm also thinking of something Robert McNamara said, how when countries with similar moralities don't agree with our conclusions upon being presented with our evidence justifying war, we should re-examine our evidence. McNamara was speaking to Errol Morris (in The Fog of War) about going it alone in Vietnam. Evan Wright--the only embedded journalist in Iraq II who's said anything worth a damn about the war--has written an amazing book called Generation Kill, and he mentions that, when asked what his unit should be re-named after the fallout of the book's revelations, one of the elite marines he rode with suggested "Child Killer." That's really interesting to me--more interesting, as it happens, than anything in Fahrenheit 9/11.

A bad person, Hussein--the leader of a country that has never invaded the United States, had never killed a United States citizen in a non-war situation and had never even threatened to do so. Their crime was that they were accused of having weapons of mass destruction, and Moore makes the good case--well, he reiterates the good case that sixteen words in a State of the Union address convinced the American people that an Iraq with nuclear capabilities would eventually be dangerous to the United States because Iraq would have no problem selling said nuclear weapons to terrorists. The United States is responsible for Al Qaeda, fifteen of the nineteen hijackers on 9/11 were from Saudi Arabia, and the Bush family has a long history of intimacy with the Bin Ladens and the Saudi Royal Family. Saudi Arabia conducts public beheadings as a form of execution, Al Qaeda goons have begun beheading hostages on the Internet--but Iraq is the threat to world stability. About 90% of the world disagrees.

Fahrenheit 9/11 would be a much better film if it provided any kind of insight into just how far into the weeds we've gone in terms of rationale for this war and our human rights violations once we got there. Moore is a very obvious man, a pop intellectual aiming for the stupidest, most malleable people in the world--what's implied in his work he doesn't understand completely because he's incapable of subtlety. His talent is that he knows there's something sour in the fridge, but he doesn't always know what it is--and he doesn't necessarily know how to find out. There are at least five different films in Fahrenheit 9/11, maybe six, and because Fahrenheit 9/11 is only one film, that means it's only ever about 20% (maybe 16.7%) effective. Moore begins with a little riff on how W. and Jeb stole the Florida election in 2000, continues with a riff on how the day before the attacks, the Bush administration cut anti-terrorist funding, then proceeds with how the Bush family was in bed with the Saudis, how disadvantaged kids in Flint, Michigan (Moore's Yoknapatawpha County) are targeted by aggressive Marine recruiters, how the mother of a killed soldier has changed her mind about the war, and how changed and bestial are our ground troops. He moves onto the war profiteering of the corporations that benefit most from Bush's tax largesse (thank God for the abolition of that dividend tax, that fucker was killing me), then to the savage collateral damage on both sides and the obfuscation of it by the American media (liberal media bias? Perhaps, but not when it comes to reporting war dead and civilian casualties), and so on and so on and so on.

Is Moore wrong about any of this? I don't think so. But he's not the originator of it, either, and the way that he presents it actually makes it seem less credible. He's not a thinker, he's a muckraker; he's not so much a filmmaker as someone who compiles video collages with the help of a dedicated--and gifted--crew of people who find damning clips. There's a bit in Fahrenheit 9/11 where Moore mocks the "Coalition of the Willing" by poking fun at the technology and military strength of some of the countries involved (he doesn't mention Britain, Australia, South Korea, Japan, etc.)--an unwise tactic and an unkind one, too, from a self-proclaimed champion of the little guy. There's a segment in which Moore tries to get house members to sign up their kids for war, ignoring the fact that they're not allowed to sign up their kids for war (kids have to sign up for war all on their own), thus rendering their demurrals less loathsome than helpless. There's another bit where Bush is reading to a roomful of elementary school kids on September 11, 2001 when he's told that the world has changed, and Moore, rather than letting the look on Bush's face speak for itself, inserts narration that undermines our disdain for this man and diminishes 9/11 by bending it to work for his thesis.

And about that thesis: Bush started a war in Iraq to distract from the Bush family's relationship with the Saudis--I don't buy it. I don't think we had a good reason to go. I don't think this is the reason we went. Fahrenheit 9/11 is stupid as hell about the most important drama of our lifetime: the most corrupt, secretive, aggressive, pious administration that I can remember (but I'm young), which has systematically rotted our economic infrastructure while demolishing our dignity in the world and has taken away a great many of our civil liberties in the name of freedom. The fact that Fahrenheit 9/11 is as powerful as it is speaks to the unassailability of the W. administration's crimes; that Moore takes aim at a target as doddering as W. and misses more than he hits says a lot about Moore. Though I don't like the position of not recommending a movie made from a sympathetic point of view, Fahrenheit 9/11 is manipulative and facile. It'll arouse passion in smart people who don't learn anything from it, but it's meant to sway the slowest kid in class. And let's face it, the slowest kid in class, if he's not a Bush, is already voting for Bush.

Any ten minutes of Jehane Noujaim's Control Room, a documentary about the Al Jazeera Arab cable news network (which reaches the air in the United States mainly as an example for how biased the Arab press is), is more insightful and shocking than the whole of Fahrenheit 9/11. Lost in the translation is the fact that the majority of people working for Al Jazeera were trained by the BBC, and that the news agency has the on-camera admiration and support of the news directors of CNN and MSNBC. Lost, too, is the fact that the reporters for Al Jazeera seem to be conscientious, clear-eyed reporters of a conflict unfolding in their own backyard. Would Fox News report an invasion of Kentucky any differently? (That comparison, once made, is inherently unfair because there may not be a free press anywhere in the world right now that is more government- controlled or biased than Fox News.) Every one of their predictions concerning Iraq II have come true (the film was shot right before and in the immediate aftermath of the invasion); every one of their insights into stories like Jessica Lynch and the felling of the Saddam statue in Baghdad is trenchant; and every time Control Room makes me wonder how else I've been lied to by this giant, mysterious publicity machine, I get this hollow feeling in my stomach.

See Fahrenheit 9/11 if you don't understand what's happening and need a broad, scattershot summary that's not likely to change your mind one way or another. See Control Room if you want insight into a larger world. And understand as you do that they're just two choices in a gathering flood of "protest" documentaries: we don't have Barry Maguire and Bob Dylan, but we do have this--let's hope it's enough. Originally published: June 25, 2004.