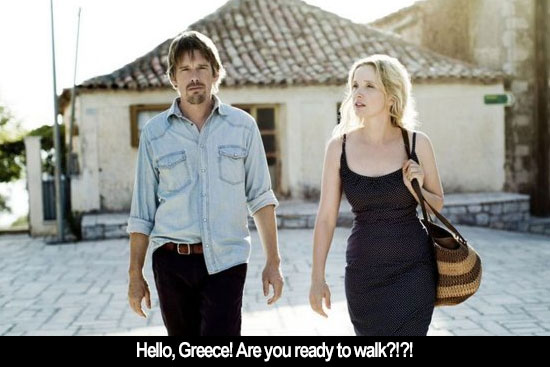 by Angelo Muredda Before Midnight opens with a bit of misdirection, a tracking shot of two pairs of shoes ambling towards the camera that we instinctively ascribe to Jesse (Ethan Hawke) and Celine (Julie Delpy) before the second pair is shown to belong instead to Jesse's teenaged son Hank (Seamus Davey-Fitzpatrick), about to board a flight back to the States. Somewhere in the slow pan up to the actors' faces, and in the deferral of series MVP Celine, is a playful acknowledgement that Richard Linklater's Before movies have grown into a franchise with a coherent visual language that's dependable enough to riff on. Much has changed since Jesse and Celine's inaugural philosophical walking tour through Vienna 18 years ago, and the prologue is an economical demonstration of how arbitrary our encounters with the couple to date have been, shaped by our inability to listen in after Nina Simone drowns out the end of Before Sunset. But the presence of Jesse's son (from the unseen wife alluded to throughout the previous film) in place of Celine, who's finally revealed in another tracking shot in the next scene, also alerts us to something new: a conflict that runs deeper than the pair's usual anxious negotiations with a ticking clock.

Where Before Sunset doubled down on its predecessor's main structural gambit of having the lovers' conversations run up against a tight deadline, Before Midnight is deliberately slack, almost grim in its evocation of time as something that runs on and on. This time we're planted near the end of what seems like a long and indulgent vacation in Greece, where Jesse has been living as a writer's apprentice and Celine has been taking time off work at an NGO to care for their two adolescent daughters. True to form, the middle and last acts stage a pair of more finite set-pieces, first a dinner party with a who's-who of Greek new wave cinema stars (including Attenberg director Athina Rachel Tsangari and star Ariane Labed) as both younger and older doppelgängers for the couple, then a long talk in a hotel suite rented for them by their hosts--an unwanted gift they've kept putting off for the whole trip and consequently the whole movie.

Before then, though, there's an anarchic shapelessness to Jesse and Celine's time together and apart, their conversations interrupted by mundane distractions that look and sound a lot like marriage. Linklater is doing something tricky despite the softness of his lensing and the surface gentility of all the onscreen wine-drinking and salad-prepping. On the one hand, he's suggesting that the previous films' structure of uninterrupted discourse is a fiction that cannot hold up in the face of the commitments of marriage, children, and work. At the same time, he's withholding the more intimate dialogue we've come to expect because Jesse and Celine are themselves withholding it, wary of what they might say to each other once all other distractions are stripped away.

Apocalyptic as the climactic argument threatens to be, much of the pleasure here lies in the total synergy between the actors and the text they're animating, rather than in our anticipation of a grand finale to a humble series. This is the second time Hawke and Delpy are credited co-screenwriters alongside Linklater, and one is struck by how organically they've funnelled their physical idiosyncrasies into these aging characters. The darker tone of their back-and-forth this time recalls European two-handers like Last Year at Marienbad and Certified Copy, as well as Voyage to Italy, which Celine explicitly references. Yet the cool modernist universality of that tradition, the sense that every woman is She and every man is He, is modified by Linklater's much warmer approach in long takes that allow Delpy and Hawke to fully inhabit their tics. Delpy has the more complicated role, insofar as Celine is a blunt person forced to internalize a number of unfair, highly-gendered expectations of her, most of which she's too ashamed to put into words. Much as one sympathizes with the writer friend who calls Celine Jesse's "more interesting partner," Hawke has never been better, either, channelling his casual Texan boyishness into an easygoing but passive-aggressive man who can't fathom why Celine might think he's asking a lot by suggesting she pause her career while they take his son from another marriage to soccer games in Chicago.

This business surrounding the fate of Hank is the most significant departure in a series that has always carved out a privileged space for its leads, who are now beholden to other people, with their other sets of shoes. Linklater's bursting of that romantic bubble--his recognition of the unlikelihood that fortysomething parents could manage an 80-minute Socratic dialogue unless it's on someone else's dime--makes the film a surprising companion piece to his Bernie, a true-crime story about the false telling (through documentary tropes) of actual events. Here, too, Linklater seems taken with the artifice involved in capturing something truthful about a relationship, aware of the sustained magic of the earlier films' long walks without quite being nostalgic for it. Midway through a major fight, Jesse takes in a pair of wine glasses, a discarded tea cup, and some rumpled sheets--the banal but meaning-laden paraphernalia of movie coupledom, or the sorts of details a metaphysical hack novelist like Jesse would normally spin into a short story. It's a striking moment, as vertigo-inducing as the tense pantomime of couples therapy that follows it, and it's a reminder that few films outside this series are as thoughtful, affecting, or formally sophisticated in saying something about love.