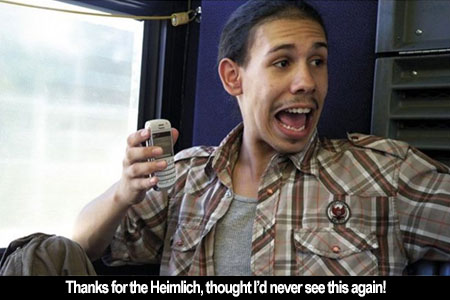 by Angelo Muredda The We and the I opens with a throwback, an image that wouldn't be out of place in Michel Gondry's distinctive music videos from the late-1990s, which were themselves full of backward glances to the more rough-hewn early days of MTV and old-school hip hop. Over the credits, a boombox modified into a miniature bus rolls along the streets of the Bronx pulsing out Young MC's "Bust A Move," until it's crushed by what's ostensibly the real thing, a city bus packed with urban teens who make up Gondry's boisterous, gossiping, and privately wounded nonprofessional cast. That's an interesting start, insofar as it suggests that Gondry's obsession with whimsical props tinged with nostalgia are about to be traded in for something more authentic, even as it implies a bit cheekily that the "real" bus, taking a bunch of high-schoolers home on the last day of school, is itself a roaming set on which to stage semi-scripted exchanges between proper teens doubling as actors and artistic partners.

Both intimations turn out to be true, in a way. There's a refreshing verve to some of the teens' interactions that would be difficult to rig, and the cast is certainly more game at playing dramatically punched-up versions of themselves than, say, Joe Swanberg's collaborators seem to be. (It probably helps that they don't have to disrobe in front of their director.) But this conceit of authenticity, a fruitful paradox if ever there was one, is surrounded by the most contrived of frames: a bus ride that conveniently gathers the entire cast for nearly two hours of conversation and catharsis. Affecting as such breakthrough moments can be in theatrical workshops--like Block Party, the film originated as a collaborative project with a South Bronx community art centre--they're at odds with the frank energy the actors bring to their best moments, like a performatively noisy chat between a trio of mean girls, pitched just loud enough for a neighbouring passenger to hear them mocking him. That tension between the captured and the staged makes The We and the I engaging, as both docudramas and community art projects go, but the gear shifts between the two modes are often painfully awkward, with the more elaborately-scripted exchanges in the final third coming off as a dutiful plate of vegetables after dessert.

As for the actual conversations that keep the bus from reaching its destination for so long, there's a lot of good material for Gondry to mine, most of it safely within his wheelhouse. He's always been attentive to prickly, romantically-wronged artists with slightly off-kilter sensibilities, and Teresa (Teresa Lynn), a sensitive Latina portrait-sketcher in a blonde wig, is a good avatar. The moody artist for whom the world is too much is a role Gondry usually reserves for men like Jim Carrey and Gael Garcia Bernal, but there's real affection and empathy for Teresa's gendered version of that experience. The fallout from a compromised moment where she was drunk at a party is especially painful in light of the masculinist culture of exploitative cell-phone videos exposed in the Steubenville rape case.

Like a number of the major players, Teresa's story is poignant, though Gondry doesn't put enough trust in it, leaving the bus for a number of flashbacks--also presented as cell-phone videography--that are obviously meant to serve as escape hatches, formal timeouts from the conceptual space of the bus without having to drop the conceit. The most fanciful of these feel like relics as much as the Young MC-mobile from the credits, and ought to have been dispatched as unceremoniously. As the two-headed title suggests, The We and the I is a film in conflict with its own instincts; it doesn't all hang together, yet that's arguably part of its charm.