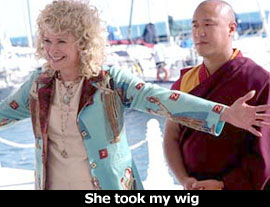 by Walter Chaw Casting Albert Brooks as the prototypical nebbish and Michael Douglas as a testosterone-geeked maniac is almost too easy, but given a vehicle like The In-Laws, with this much heat invested in its direction, the casting doesn't seem so much lazy as inspired. Based on a 1979 film starring Alan Arkin and Peter Falk in the roles of put-upon father-of-the-bride and crazed father-of-the-groom, respectively, the remake doesn't have a single scene as classic as the "serpentine" gag of the first but compensates with the sort of instant familiarity afforded by veteran personalities in comfortable roles. Douglas has been here before in another tale of familial dysfunction, The War of the Roses, and Brooks has never really been anywhere else; the picture, paced like a trip-hammer by director Andrew Fleming, only really fails in its drab newlywed couple and a passel of homosexual gags that are badly dated and bordering on unkind.

Jerry (Brooks) is a phobic podiatrist whose only daughter (a non-descript Lindsay Sloane) is marrying Steve's (Douglas) only son (an overreaching Ryan Reynolds). Meeting for the first time days before the blessed event, Jerry discovers that Steve may be something other than a Xerox salesman. Candice Bergen makes a nice, surgical cameo, and Robin Tunney is memorable as a rough-and-tumble Girl Friday.

Scored with wit by a pointedly wry Seventies soundtrack that crucifies its older generation protagonists, The In-Laws is ultimately that rarest of beasts: a modern comedy that knows its strengths and exploits them. Situations are knowingly absurd but played with deadly earnest, and the bulk of screen-time is given over to the relationship between Jerry and Steve. The picture, very simply, understands that this humour is in the friction, crafting a beast that is midway between early Neil Simon and Pink Panther-era Blake Edwards. Such a chimera, however, carries with it the burden of some late sentimentality and The In-Laws, for all the energy of its first two-thirds, stumbles across the finish line at the end, trailing some redemptive falderal about being a good father like a drag anchor.

So if its ultimate resolution doesn't do justice to the delirious absurdity of its beginning, there exists at least in the picture the idea, now out of favour, that comedy is best when it begins with character and proceeds into situation. Opening the same weekend as Jim Carrey's atrocious Bruce Almighty, there emerges in the comparison the understanding that where Carrey is mainly interested in being the eye of the hurricane no matter how ugly the storm, Douglas and Brooks are content to react to the ridiculousness (or routine, as the case may be) of their predicaments. That the facile, obnoxious Bruce Almighty is destined for nine-figures and The In-Laws for a quick exit into the dollar cinemas carries with it an ugly truth, and all ye need to know about why we get so many of the movies we do. Originally published: May 23, 2003.