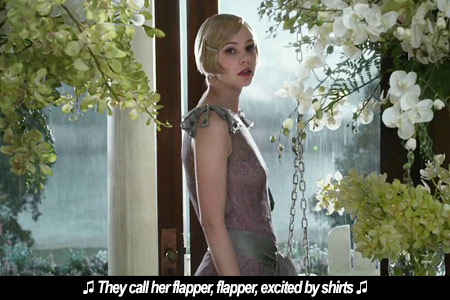 by Walter Chaw The great irony of Baz Luhrmann's unwatchable farrago The Great Gatsby is that it's not so much an interpretation of its titular hero's self-aggrandizing fandangos as a literalization of one. It's all surface, all façade, and not coincidentally, the most successful thing about it is Luhrmann's shooting of Gatsby's legendary parties as infernal bacchanalia. But that bit of useful critique is clearly a fluke, an accident of Luhrmann's one-trick pony kicking over the single element in Fitzgerald's book that is remotely compatible with Luhrmann's style. The marriage of Baz with Fitzgerald, in fact, is a little like asking Michael Bay to adapt The Brothers Karamazov--it's Timur Bekmambetov's A Farewell to Arms. It's showing off in the loudest, most obnoxious way possible, without any kind of critical, nay, useful, rationale for all the bread and circus--an asshole at play with Welles's "best train set a boy could ever want," with the casualty only what's possibly the best American novel ever written. It's an effrontery to taste, the sole consolation being that as Baz Luhrmann's The Great Gatsby is something of a motherless child, there's no one who will love it. No one could.

If you've been to high school, The Great Gatsby is about poor Nick Carraway (Tobey Maguire), who befriends mysterious playboy millionaire Jay Gatsby (Leonardo DiCaprio) not knowing that (the great) Gatsby is interested in Nick's cousin Daisy (Carey Mulligan). To meet her (to be reunited with her, if you must know), Gatsby throws rip-roaring metaphors for the hedonism of a decade (the '20s) on the brink of the Great Depression, attended by allegories for materialism run amuck and venality in all its popular forms. But Daisy doesn't show up until Nick invites her, not knowing that she's become symbolic of a young nation's idealism (much like Henry James's Daisy--Miller, not Buchanan) and, in Fitzgerald's cruellest twist, ultimately representative of a specific bourgeois ennui. The Great Gatsby counts among its enduring images one of Gatsby reaching out across the bay that separates him from his inamorata towards the green searchlight at the end of her dock. Daisy, I forgot to mention, is married to all-American lunk Tom (Joel Edgerton); there's also stuff about class, xenophobia, shell-shock and the Great War, and the idea that maybe, just maybe, The Great Gatsby is the American Iliad--the battle across water, the empire in tatters, the gods impotent, the prize-Helen imperfect and treacherous.

If you haven't been to high school, The Great Gatsby is about a vacuous writer (Nick) committed to a sanatorium and convinced by his therapist to write his woes, which, at the end of a few hours spent clattering away on a nifty Remington portable in a lamentable framing story, produces a book he titles, yup, The Great Gatsby. It's about how he makes friends with a rich guy with a secret who's in love with ephemeral beauty Daisy; and it's about how it all ends in tears when it turns out Gatsby isn't what he appears to be, Daisy isn't what she appears to be, Tom is exactly as he appears to be, and some floozy (Isla Fisher) gets thrown about forty feet into the air in extreme, ridiculous slow-motion. Also, it's in 3-D, since "gauche" to Baz Luhrmann is merely a waypoint on the way to "emetic." It's telling that the most emotionally affecting moment of The Great Gatsby is the part where Fitzgerald's words "So we beat on, boats against the current, borne back ceaselessly into the past" float onto the screen: more of the CGI that Baz loves, sure sure, but at least in the service at last to the delicacy of the written word.

A breeze blew through the room, blew curtains in at one end and out the other like pale flags, twisting them up toward the frosted wedding-cake of the ceiling, and then rippled over the wine-coloured rug, making a shadow on it as wind does on the sea.

It's a wondrous passage in a book full of them--one that suggests depths, hints at Gatsby's creation story to come, and underscores themes and a particular mood of romantic melancholia. Under Luhrmann's hand, the scene becomes gaudy. The "wedding-cake" of a ceiling is a literalized purple monstrosity of layers and bands, and the curtains, the "pale flags" that come in and blow out, are a typhoon of cascading white linen that isn't beautiful so much as frenetic, aggressive, almost ugly, actually irritating. To say that The Great Gatsby is "unwatchable" is hyperbolic because you can watch it, of course; what's the word for something that's so painfully misguided you'd rather not watch it? Regrettable, that's what this is.

All the more so because DiCaprio makes a very fine Gatsby. At this stage in his career, he finds himself capable of conveying regret, ambition, and, crucially, hope. Maguire reprises his performance from Wonder Boys and Mulligan continues to take the winsome sad roles that Michelle Williams turns down. They're trapped in the film in the same way that Gatsby's essential hopefulness is trapped in the flight of his fancies and affectations--possibly-interesting performances made role-players by Luhrmann forever upstaging them, and occasionally made unintentionally hilarious because Luhrmann's style confuses pathos with slapstick. Ultimately, the less said about the use of African-Americans as Greek Chorus the better. What is there to say about it, anyway, except that while it's possible to pull this off (see: Elia Kazan's Baby Doll), Luhrmann ain't the guy to do it--whether or not Jay-Z produced the film. (He did, and cameos as well in another nonsensical image.) The Great Gatsby is terrible--that much is expected, I suppose. The real tragedy is that the experiencing of it is akin to watching something beautiful drown: trapped in garish amber, eternally visible, eternally suffering.

Right about the film, wrong about DiCaprio ... Great actors can still be great in stinking pieces of shit like this. He's not a great actor, he's a model who has learned how to "show" he has emotions. Don't pity him for being in this... Now If only Scorsese could have bet on a better pony so many years ago, his career would not have become such a joke.