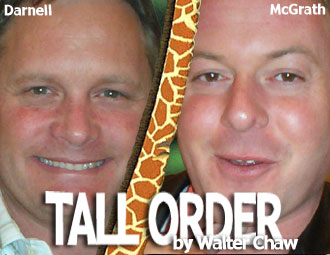 The co-directors of MADAGASCAR have an animated dialogue

May 29, 2005|As far as I'm concerned, by and large, when the conversation turns to animation, you have Brad Bird and Pixar in the United States and Satoshi Kon, Hayao Miyazaki, and Yoshiaki Kawajiri in Japan. Animation has a long way to go in the U.S., not in terms of technology but in terms of a willingness to see it as a medium for mature storytelling rather than as a ghetto for sub-par children's entertainment. Stuff like Shark Tale and Shrek make overtures to an "adult" audience with sexual innuendo, disturbing violence, and pop cultural riffs that may raise unsettling questions about existential substance (does any of this stuff exist outside of its own reflectivity?), yet do little to stimulate real excitement. They're failures, sometimes outrageously popular ones, trapped in amber.

I met Eric Darnell and Tom McGrath, the duo behind the latest DreamWorks animation Madagascar, in a conference room in the bowels of Denver's Hotel Teatro. I knew of CU alum Darnell--the spitting image of the squat penguin commando he voices in his current film­-from his fine work on Antz (still the only DreamWorks animation worth a conversation) and McGrath--the spitting image of Canuck funnyman Harland Williams--from his short tenure on the post-John Kricfalusi "Ren & Stimpy". The two came off a little canned, with Darnell all business and McGrath a little dreamy; I tried to draw them out of their comfort zone in a way that their film, alas, seldom did for me.

FILM FREAK CENTRAL: What does the second chimp sign when the first one suggests that they go see Tom Wolfe?
ERIC DARNELL: (laughs) He signs, in basic American Sign Language, "Are we going to throw poo at his ridiculous white suit?"

Which segues into my question of whom you see as your audience.
ED: We were mostly just looking to satisfy our own sensibilities.
TM: Which are really juvenile.
ED: (laughs) We were hoping that the animation would be really appealing to kids and that the references would sort of attract grown-ups like us, knowing that it would be over the heads of a lot of our audience but wanting to, as much as we could, make a film that we would enjoy seeing, that would make us laugh.
TM: Most people perceive animation as being a kid's venue and parents, after all, have to take kids to the movies and we love animation...

Who are your favourite animators?
TM: For this movie we really looked to Bob Clampett, Tex Avery, Chuck Jones--people who really did what we loved about animation, which is sort of the caricatured or exaggerated reality. I mean, duplicating reality is okay if that's what you want to do, and computers are especially good at that, but we wanted to break through that a little bit, push things beyond into fantasy. What is it, how does it move in that world?

Cell vs. computer animation?
ED: I always think of whenever there's a new technology--like photography: photography will be the death of oil painting! And then film will be the death of photography! No, I think that it's not so easy as to say that traditional animation is dead. You say that and then Spirited Away comes out and wins the Oscar...
TM: I dunno, our goal in the whole thing was to combine the best of what we loved the most about both mediums. Eric has a stronger computer background than I do, but we both have roots in each... Computers can make whole tactile worlds, but the type of motion that traditional animation has, that's something we wanted to preserve.

It's hard, in fact, to separate the two disciplines oftentimes.
ED: It is, yeah. Another analogy is watercolour and oil painting: a painter is a painter, they may prefer one medium or another, but most can work with either or both together. You get a lot of 2-D artists reluctant to cross over to computer technology out of allegiance to tradition or whatever, but when they do it--a lot of times out of necessity--they discover that it doesn't hurt, that, in fact, it makes a lot of things a lot easier.
TM: Things that you can't do with paper you can suddenly do in these virtual environments, right? A lot of the best talent that worked on Madagascar were guys who were coming to this technology for the first time.
ED: All of us were coming to some of this technology for the first time.

Is ease a good thing in this creative process?
ED: Well, listen, so much of animation is repetitive process--this obsessive reproduction of nearly identical images--and to do all that by hand...
TM: Not ease in the creative process, you know, but that it makes the actual elbow grease part of it a lot quicker.

See, but my affection for forms like stop-motion and traditional animation is that the artist's hand is apparent in every frame.
ED: There's definitely something to be said about traditional modes of animation, of actually getting in there and getting your hands dirty and there's a lot of that in what we do.
TM: Right--people have this idea that you wave your hands at a computer and suddenly everything just appears in the mainframe, but it's all just tools.
ED: Characters are drawn on paper, the whole storyboard process is on paper--story artists, models, all of these things go into it first before we introduce it into the 3-D world. People confuse the real work of animation for the bells and whistles of CGI.

Isn't that a danger?
ED: Sure, it's a big danger, limitations sometimes are a good thing. We had to constantly say, "Let's not move the camera around just because it's easy." We needed to have it clear in our heads that when the camera does move, it edifies the story.
TM: Sometimes the creative does drive the technology--we knew we wanted hundreds and hundreds of lemurs on the screen at one time and when we started the project, the technology was able to provide four--and then there's the water that's always difficult. The whole wave shot was a monumental undertaking.
ED: And it's not all just algorithms and routines, you plug in the numbers and let it run--no, the place where that wave breaks is controlled by hand. Not only does it have to look and feel like water, but it also has to fit into the design of the world. It's not photo-real water, it's Madagascar water. But the point I want to get back to is that it's all rooted in a drawing and the creativity to imagine it in a different environment.

Why the gulf between American animation and Japanese anime?
TM: It's hard to know where the differences necessarily come from... So much of it is a cultural attitude, I guess I'd say, the kind of stories that people are told and will tolerate from the animated medium. What anime does so well is present worlds never seen before as matter-of-fact--it leaves an impression on you even after you've watched it and it frees you, liberates you from what you know. Animation should be that, I think: liberating. We're late coming to the recognition, I think, that this medium can be as much for adults as for kids.

In respect to that, it seems as though Madagascar is heading towards a racial subtext with the zebra's "Am I white with black stripes, or black with white?"--and then it doesn't.
ED: We never had it in our minds that it was going to go in that direction. Chris Rock, he brought so many things to Marty that we never imagined and that's part of the beauty of working with a guy like Rock.
TM: "Crack-a-lackin."
ED: (laughs) Yep, that's all Rock. Look, like we said before, we wanted Madagascar to be fun for both kids and their parents--it's reflected in the style of the piece and in the way that we present the situations. We wanted a Looney Tunes effect: the violence more cartoony, and the moral as simple as friends are friends no matter where they're from or where they go.

What I'm asking, I guess, is if you pulled back from thornier subtext in respect to potential box office.
ED: No, not at all. It didn't have that kind of intentionality, and we didn't have any interference from DreamWorks. We just wanted to make a movie that would make us laugh.

When do you think American audiences will be primed for a grown-up animation?
TM: Listen, in the United States it's always been Snow White on one side and Fritz the Cat on the other and I think that's the kind of perception that we're fighting against. If it's not for kiddies, it's for adults--you ask most people on the street and they'll tell you that they think that Japanese anime is all about sex and alien rape and stuff. But you look at stuff like the old Looney Tunes and we all grew up watching that with dad and he'd be laughing at stuff that was right over your head but it'd be just as entertaining to both of you and then, as you get older, that stuff maintains its charm. So I think those old guys really hit on a balance.

Lots of cross-dressing.
ED: (laughs) There is that, indeed.

Tom, you mention Ralph Bakshi's Fritz the Cat--I know that you worked on his Cool World.
TM: Ralph gave me my first job in animation. Although the film didn't do well by any means and wasn't a great film--I think he'd tell you that--there were budget and time problems and a changing of the guard at Paramount at that time. I owed my roommate a load of money and went to Paramount for a job doing anything, basically to pay back my roommate. Just had my portfolio and met Ralph and he's this intimidating presence, sitting on a coach looking at my work, eating a bagel--"This is pretty good, kid!" and all these bagel crumbs are flying all over my stuff. But he gave me the job, real early on, my foot in the door. In my career there's been Bakshi and Jeffrey Katzenberg--both so passionate about animation, I've been really lucky.

Compare DreamWorks with Pixar, Blue Sky, Disney...
ED: Well, we don't work at those other companies so I can't comment on what they do, but I do know that at DreamWorks, what's great about making movies there is that there isn't necessarily a house style. There's no rulebook when you're developing a film that you have to follow. That means that every movie can be different, can have its own style. There's no way we could have taken a coffee table from Shrek and stuck it in Madagascar--and that's great.
TM: Every time out it's something that you haven't seen before. What was important for me in going to DreamWorks is this idea that we could tell stories that could only be told through animation. At the end of the day, we want everyone to succeed. We don't want to see any bad animated movies you know, we want to be able to build that momentum of "Oh that was great, I'm excited to see the next animated film," so that hopefully we can push animation into increasingly daring places for every audience.

For the record, I'm just glad that Madagascar doesn't feature threats of gang rape like Home on the Range, gangland hits like Shark Tale, or disturbing racism like Brother Bear. You don't have to comment on that.
ED: (laughs) Thank you.
TM: (laughs) Yeah, phew.